SIX OF THE BEST… things newer writers should avoid doing

A couple of days ago, my review of Laurell K. Hamilton’s latest novel, Crimson Death, appeared on Escape Pod. One of the things that I always complain about with Hamilton’s books is that they’re more and more relationship angst and less and less plot.

Since it’s November, and ostensibly NaNoWriMo, I figured I’d give you six of the best things newer writers (and established ones too) should avoid doing if they want to improve their writing. 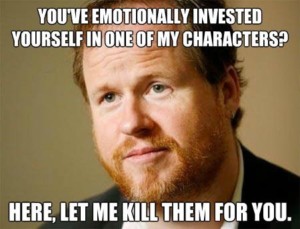 6. You need to know everything about your characters, but your reader doesn’t. — This is my “Laurell K. Hamilton” tip. Hamilton clearly loves all of her characters (even the evil ones), and she shows it by describing them in vivid detail in every book — often using the same descriptive words from book to book, and even within the same book. It can get a little tiresome, especially when you have as many characters as Hamilton does in her books.

What should you do? You don’t have to describe every character’s every attribute, and you certainly don’t have to do it as exposition. You can still have a lot of characters if you need to, but the trick is to only give details if they’re going to matter. Otherwise, I mean, why bother differentiating them in the first place? Also, think about how the POV character would look at other people — what is seen first, what is noticed, etc. But the last thing you need to do is spend a paragraph or two describing every character that enters the book at that specific point. It kills your pacing.

5. You don’t need to explore every single possible plot point and interaction. — Hey, George R.R. Martin, you know who your readers love, right? Tyrion, Jon Snow, and Arya. You know who we don’t? Asha (Yara on the show), Sansa (in the beginning), and even Sam is getting a little stale. Martin has a penchant for fully fleshing out and exploring every character’s meanderings through Westeros and Essos, and it makes the books immense and difficult to read, no matter how interesting the story could be. After a while, I just get sick of reading the books, and that impacts my enjoyment of the characters and storylines that I do like.

What should you do? I’m reminded of something Lin-Manuel Miranda was told during the process of writing Hamilton, though I can’t remember who told it to him. Maybe Sondheim? Anyway, it’s “only write the parts that are a musical.” In other words, you only need to write the parts of your story that are germane to the plot and are going to advance it in a generally-forward direction. If you want to write sidebars, great; cut them out afterward. I can think of three of my in-progress novels that have subplots and detours that need to go, not because they’re badly written or uninteresting, but because they take us away from the direction I want the story to go in. 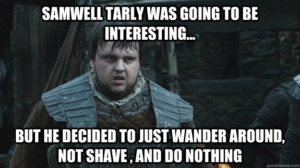 4. You need to make everything easily available for your readers to buy. — My wife is making her way through JD Robb’s “In Death” series. For the most part it’s novels, but Robb also wrote several novellas and short-stories peppered throughout the series, and those items weren’t necessarily published in such a way that a reader can easily get to them — at least, not without buying things she doesn’t want. Sure, having a short-story by JD Robb headlining an anthology will most likely lead to more sales, but JD Robb’s fans aren’t necessarily going to want to buy a $10 anthology for a story that should cost $2 on Amazon as an e-book.

What should you do? Look, I get it: if you’re up-and-coming, and an editor says “write me a story set in your world and I’ll put your name at the top of the cover in big letters”, you do it. And yes, rights are a tricky thing to negotiate, especially if you don’t have an agent to do it for you. But as soon as you can, you need to get the rights back and put the story online as a stand-alone. You’ll make your fans happy, and you’ll get an additional revenue stream. 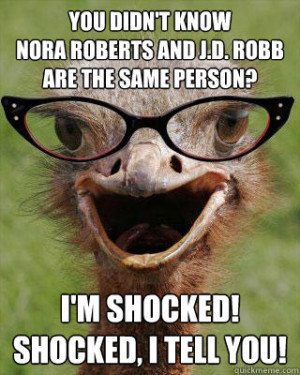 3. You can write a stand-alone book. — It’s almost impossible to find a stand-alone book these days. Either a book has a sequel hook that turns into a second and third story that aren’t as good as the first (sorry, Ann Leckie, but Ancillary Sword was the best book in that trilogy and it didn’t really need sequels), or you have a book that ends with a climactic scene and then drops off into a cliffhanger (like Worldwar: In the Balance — I didn’t know it was a series and I was pissed when it ended that way). Every time I see a burgeoning writer tweet about their new contract, it’s almost always a multi-book deal. But it doesn’t have to be.

What should you do? I know that the big money is in sequels and series, but you have to start with one book first. Concentrate on your first book, and put all your energy toward that. Give it a solid, satisfying ending. Then go back and throw in a sequel hook that won’t annoy readers if it doesn’t pay off. For example, my superhero novel has a teeny tiny little hook in it, but since I don’t really want to write a sequel, I may just let it sit there, unused. But if an agent gets me a three-book deal, I’ll pay it off. Thing is, I started by writing one book, with one outline, and I didn’t focus on the long game because I didn’t have one yet. 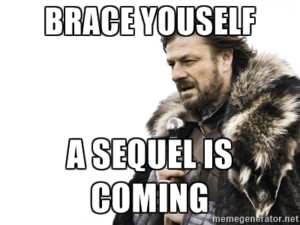 2. Your genre heroes need limitations*. — I really enjoyed Patrick Rothfuss’s first two Kingkiller books, and eagerly await the third, but I’m also cognizant of the fact that Kvothe is pretty much unstoppable. He does have stumbling blocks, but he seems to ultimately be successful at everything he does: magic, fighting, music, sex, etc. And as much as I loved the Harry Potter series, it’s not really clear what the wizarding world’s limitations are — is it will? Is it inherent magical ability? Is it emotions and control? This is never explained. And it’s even less-explained on Buffy — how does Willow grow in power? What are her limits? (If you read the comics, the answer is “none”, which is pretty lame.) Charmed is the same way.

What should you do? The best stories show that magic, or powers, have a cost. Recently Agents of Shield has shown that every time Daisy uses her powers she risks breaking her bones, to the point that she could be killed. In most RPGs, magic users have a limited amount of MP before they run out of magic. On the Discworld, wizards know that using too much magic can attract the attention of the Dungeon Dimensions, and anyway they have to charge up their staffs and prepare their spells in advance. By putting limitations on your heroes — for example, in capacity, ability, or knowledge, or a combination — you give them reasonable obstacles to overcome, either via straight-line attack or by going around the problem. And that’s better for your story, in general, than just saying “and then Piper blew up the demon. The end.” 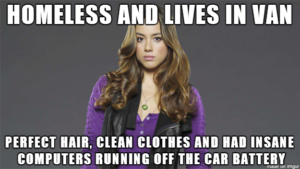 1. You should never write about a writer (or other artist) who can’t write (or art). — I’ve only really seen this done well a few times — Californication being the best example. But for every Californication, there are a hundred versions of The Dog Problem (so boring and self-indulgent that I turned it off after 15 minutes) and a hundred books or short-stories about creatively-blocked writers who teach at small-town MFA programs. They say to write what you know, but everyone — even non-creative people — knows about writer’s block.

What should you do? Never make your main character a writer, editor, publisher, or other kind of artist, unless that artist is not dealing with writer’s block. Write a book about a musician who’s having trouble in his love life, or a painter who has to move home and take care of her ailing mother, or, yes, an author going through a messy divorce. But the story shouldn’t be about being blocked creatively. That’s boring, and it’s almost never done well. 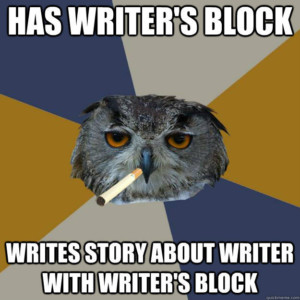 Amusingly, in the “I never follow my own advice” column, I actually have a couple of projects that feature a writer who’s creatively blocked. But none of those projects focus on the writer’s block; they focus on the writer’s relationships. I’m thinking specifically of one about a college professor who wrote a few books (I know, right) and is working on another one, but then an old flame comes back into his life and she’s dealing with cancer as they form a relationship. The book isn’t about writer’s block, although writer’s block occurs in it; the book is about the relationship between my characters.

And, really, that’s what your readers care about most of all. 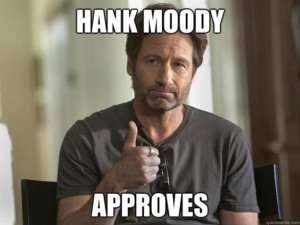 Josh Roseman’s new time-travel novelette is coming this month from Amazon. In the meantime, check out his first collection, The Clockwork Russian and Other Stories, which has been called “intelligent, compelling, and always entertaining” by award-winning author Sean McMullen, and “thought-provoking” by Big Anklevich, editor of the Dunesteef Audio Fiction Magazine.

* I know I’ve said this before, but it bears repeating. I’ve said the next one before as well.