SIX OF THE BEST… things about fidget spinners

And then I played with one, and my world changed. Not a lot, but a change occurred.

Anyway, here are six of the best things about fidget spinners. 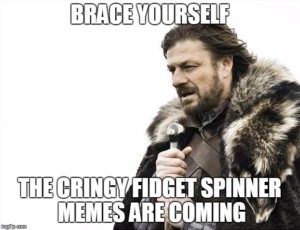 I find this image to be quite meta.

6. They’re cheap. — You can get fidget spinners for as little as $2 if you look in the right places. They’re under $10 at most stores — literally most. I got one for $9 that has the Miami Dolphins logo on it because I was buying some stuff from NFLShop anyway and I figured “what the hell, you only live once.” Some of them fall apart easily; some are well-made. It really depends. But you don’t have to spend a lot of money to try one out and see if you like it. 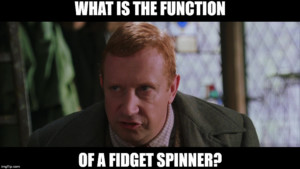 5. They’re fun. — I remember back in Ye Olde Dayes when I had a toy called a gyroscope. You would put a string around the axis, pull the string off really fast, and it would spin and stay standing up thanks to the conservation of angular momentum. I didn’t know that at the time; I just knew they were cool. Well, fidget spinners seem to have replaced gyroscopes, and I do some of the same things with them: I spin them on tables, I hold them on one finger, I watch them until the spinning stops. I’m actually enjoying myself while I do this, just like when I was a kid. Nostalgia? Maybe. 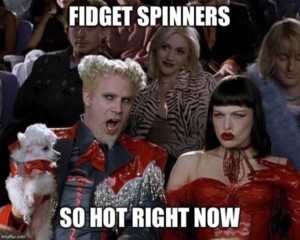 4. They’re quiet. — I’m sure there are some spinners out there that make annoying noises, but generally the only sound other than a slight “whoosh” a spinner makes is the loud clunking if you accidentally drop it. Which I have done multiple times. Compared to some other fidgety things — tapping fingers, crumpling paper, popping bubble wrap, clicking a null button on your mouse — spinners are actually pretty unobtrusive. 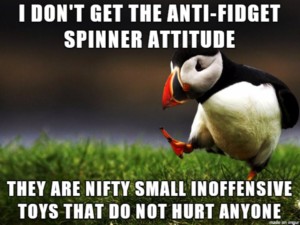 3. There’s something about the weight. — Every spinner I’ve ever touched is made of some kind of heavy material, like ceramic or metal. Now, maybe it’s another function of nostalgia, but some of my most fondly-remembered toys were made of metal — FASA starships come to mind, as well as Starcom, who were to be fair mostly plastic but there was enough metal to make them magnetic. As well-made as some plastic items are, sometimes they just feel cheap, probably because plastic is usually lightweight. If an object has some heft to it, it just feels better; maybe this is related to the concept of weighted blankets and how they help with calming people down. I really don’t know. 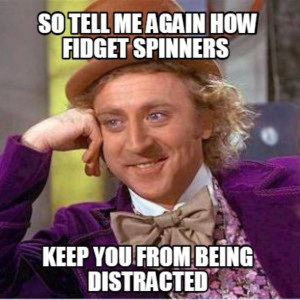 I swear one of these days I will do a column without a Willy Wonka meme.

2. They’re safe for almost everyone. — As long as you don’t give a spinner to a child young enough to put it in its mouth or any other orifice, spinners are relatively safe. I mean, I see how you could hold one to create an impromptu brass-knuckle when you want to hit someone, or you could throw it and it might hurt a little, and please don’t get creative with the holes… but otherwise there’s really no way I can think of to be hurt by a spinner. It’s just a little toy you hold in your hand that spins around until it stops. 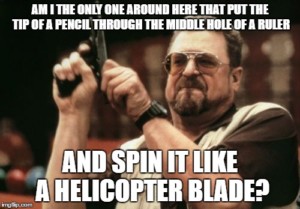 1. They actually work. — Maybe it’s just me, but I don’t think so, because there are a lot of people who say this: fidget spinners help them with their distraction issues (and before you start yelling at me, read the Bonus Content). In my case, instead of doing something potentially bad for me (like eating when I’m not hungry), I just spin the thing. I listen to it, I watch it spin, and I don’t go do something else. I wouldn’t say it calms me down, per se, but I suppose you could consider it a calming behavior. And really that’s the point of the device. In my case it’s anxiety and depression, and I’ve been a fidgeter all my life anyway. This cuts down on that just a little bit, and even if there’s no scientific evidence showing that it does anything, it makes me feel a little better and it’s not harming anyone. 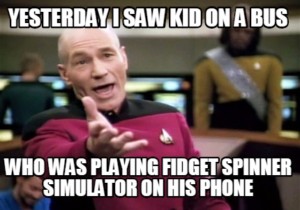 My daughter has this game. I want to say I can’t believe it exists, but I also remember Flappy Bird.

Here’s the main problem with spinners: they’re considered toys. Schools don’t want kids to play with toys (even though there is evidence that play-based learning can be successful); they want them to — at least in the US — do better on standardized tests. Anything that takes away from that goal is automatically the WORST THING EVER.

But even if there’s no scientific evidence, sometimes weird things help. My daughter has told me several times over the years that some of her fellow students are allowed to chew “focus gum”, which is really just gum (although there are actual gum products that supposedly improve your focus), and if a student is too fidgety the teacher will lend out a tactile toy of some sort, like a miniature koosh ball*, to help the student focus. Sometimes stuff just works, and for some non-neurotypical people, maybe spinners are the thing.

Honestly, for me, spinners aren’t the absolute best option because they don’t alleviate my issues; they just provide a momentary “fix”, if you will, of something that grabs my attention. I’m more likely to try and fix myself by doing something that I can completely control. If I am mad or sad or upset at home, I’ll go do the dishes or clean something, because I can completely control the situation — how hard I work, how much gets done, how long I go on for. If I’m out somewhere, I might start playing a mindless pattern-matching game on my phone.

Everyone’s coping mechanisms are different. Sometimes you just have to accept that and move on. And for those people whose coping mechanism is to spin a fidget spinner, well… it’s cheap, it’s quiet, it’s not hurting anyone, and it just might help. Of course, figuring out who’s doing it because they need to and who’s doing it even though they don’t need to is another story, and I feel for anyone — especially teachers — who is put in that situation. I understand why they are banned at certain schools or in certain classrooms, but sometimes a blanket ban isn’t the answer. (Unless it helps improve standardized test scores, in which case administrations are like BANINATION!**) 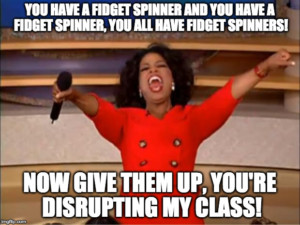 * And does anyone else remember just how popular those things were?

** Maybe I should’ve just written about standardized testing instead.