SIX OF THE BEST… Star Trek: The Next Generation season seven episodes, according to my daughter

My daughter and I recently finished watching Star Trek: The Next Generation (my wife joined us for a good chunk of it too), and I figured I would squeeze a couple of columns out of that. Unfortunately, eleven-year-olds sometimes can’t recall as much as we’d like, so I limited it just to the seventh season, because that’s the most recently-watched one. She was only too glad to help.

In general, my daughter prefers characters to stories. “That’s why I chose a lot of these,” she said, “because I like the character themself.” (She said “themself”. I didn’t.) We went through the wiki for the seventh season and discussed the episodes, and here are six of the best from that season, according to her. 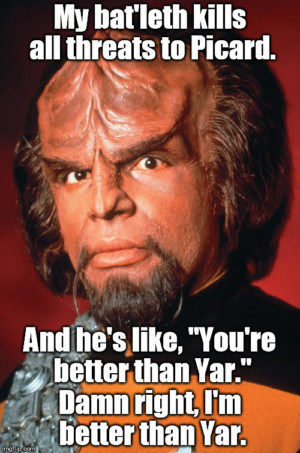 She actually has this on a t-shirt.

Synopsis: Worf’s son Alexander comes back in time to convince his father that he (Alexander) needs to be trained as a warrior.

I thought… The ending of this episode was pretty “meh”. In fact, the whole episode was “meh” — they shoehorned in the Duras sisters, a Klingon festival, James Sloyan, and family drama. It was just uneven. Not one of my favorites. 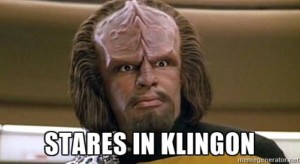 As you can see, Worf is one of her favorite characters.

5. “The Pegasus” — “Riker was experimenting on something illegal, and also it was cool because Riker thought that his ship was gone forever and then when they found it his old captain was like ‘you have to do this, you have to restore the forcefield and be illegal again,’ and Riker said ‘no, I’m with the Enterprise now and I don’t want to ruin my reputation and I want to be a good officer,’ and then when Picard found out that they had an evil forcefield Geordi was like ‘let’s use it to get out of here’ so they got out of the asteroid. Yay, the end.”

Synopsis: Riker’s old captain, now an admiral, comes aboard on a secret mission to find their old starship. As it turns out, the admiral was doing illegal cloaking experiments, and after a mutiny in which Riker refused to participate, the ship was lost. Eventually Riker breaks secrecy to tell Picard what’s going on, even though it could mean his career.

I thought… This was a pretty good episode for Riker, and Terry O’Quinn is good in almost everything, but it was tainted by the atrocious finale of Enterprise. 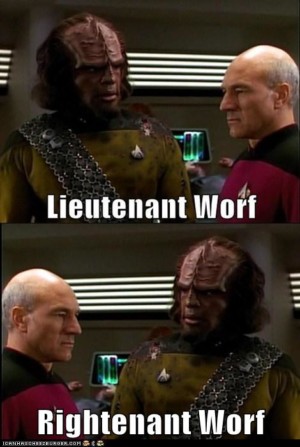 4. “Journey’s End” — “Wesley is a good character and I liked the Traveler a lot, and that’s all.”

Synopsis: Wesley quits the academy and comes back to the Enterprise. He is a big grump. He ends up on a planet of generic Native American stereotypes and ends up being recruited by the Traveler.

I thought… I never much cared for this episode. Wesley had always been such a good kid — even in “The First Duty” when he lied to cover up his friend’s death — and now he was being a complete tool. Add to that the stereotypes and the Traveler ex machina and I just didn’t connect with the episode. 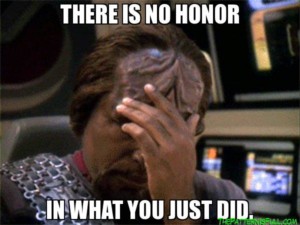 Say this to someone after a fart.

3. “Dark Page” — “I thought it was cool because I never knew that Deanna had a sister, and that’s probably why her mom was so protective of Deanna, because she was like ‘I don’t want this to happen to you.'”

Synopsis: Deanna’s mother comes aboard to help a race of telepaths learn to speak verbally, and the stress triggers a repressed memory of an older sister Deanna didn’t know she had — a sister who died in an accident, and whose death Mrs. Troi blames herself for.

I thought… The first couple of times around, I really didn’t care for Mrs. Troi, but the more I watched the show the more I realized that she’s actually a very good character who was saddled with a lot of really bad scripts. Though this episode doesn’t show up on any best-of list I’ve seen, it’s a good use of the character and seeing Mrs. Troi have to deal with pain is a smart way to let us see that she sees that Deanna is a good counselor. 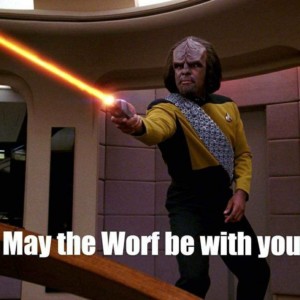 2. “Preemptive Strike” — “I like Ensign Ro, and I’ve seen Voyager so I know a lot about the Maquis, and I think it was cool that the aspect of the Maquis started there.”

Synopsis: Ensign Ro, now a lieutenant, returns to the Enterprise and is sent on a secret mission to infiltrate the Maquis. She does, but starts sympathizing with them, and eventually defects. Picard is not pleased.

I thought… I hated Ro going out like that. She’s a complex, nuanced character, but the writing for this episode was so bland and obvious that I knew what would happen from the moment she started talking to the old guy. 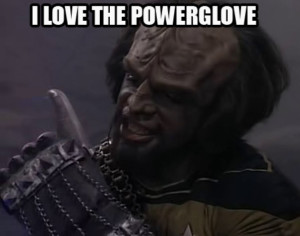 1. “Parallels” — “I like Worf, so multiple Worfs is better than one Worf.”

Synopsis: Worf goes through a spatial anomaly and then, every time he’s close to Geordi, he shifts realities.

I thought… I love this episode. It’s one of my favorites. Seeing all the little changes, and watching Worf try to deal with them, was really enjoyable. Worf is a compelling character, and he rarely got to carry an episode that wasn’t about some sort of Klingon stuff, so this was a nice change. 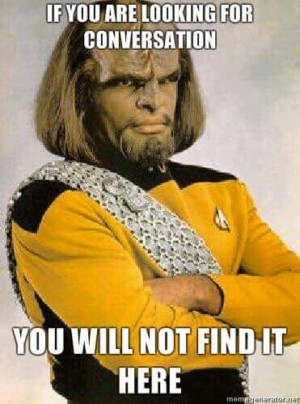 My daughter actually had one more episode that she really liked, but it wasn’t one of the top six. It was “Lower Decks”, about which she said: “It was kind of cool to see what the ensigns and crewmen did while everyone else was doing their job.” This was indeed a great episode, not only because it brought back Ensign Sito but also because it showed us what some of the other 1000 people on the Enterprise do.

Originally she had “All Good Things” (the series finale) on there too, but she decided to remove it, even though Q is her favorite guest star. Who knows what passes through the fickle minds of children… 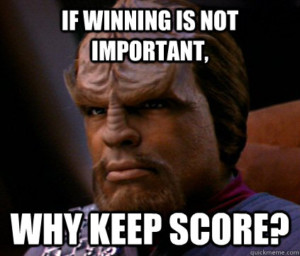