Okay, let me explain how I came up with this: back on September 4, I tweeted a link to Dion Beary playing every Mumford And Sons song. Mr. Beary has a beard. There’s a band called Spock’s Beard. In “Mirror, Mirror”, Spock had a beard.

So you kind of know where this is going.

Here are six of the best Star Trek AU beards. And, in case you don’t know, AU means “alternate universe”.

6. Mr. Tulak in “Author, Author” — The Doctor has decided that he should be writing a holonovel about hologram freedom, and he writes what he knows: a barely-changed version of Voyager, which includes “Mr. Tulak”, who is not a Vulcan, but who the makeup staff gave a goatee, probably because the original character is a Vulcan and we all know who’s going to be #1 on this list. (He also gave Lt. “Marseille” a moustache; I almost put him in the list just for that, but a moustache isn’t a beard, despite the powers ascribed to it by certain recent films.) 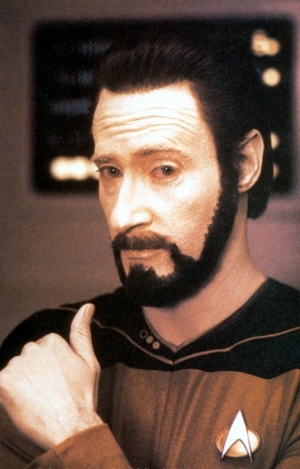 5. Data’s beard in “The Schizoid Man” — In a throwaway gag early on in this Next Generation episode, Data tries “growing” a beard because he’s done some research indicating that beards can make people seem more intellectual. Changing his hair is referenced later with his gray streak in “All Good Things”. (Fun fact: this is the only TNG episode where no member of the landing party is 100 percent human. Thanks, Memory Alpha!)

4. Tom Riker’s beard in “Defiant” — We all thought that Commander Riker was coming to visit Deep Space Nine to check out the Defiant, but it turns out it was all a Maquis trick! Once he has command of the ship, Tom removes his sideburns, leaving him with a standard “evil character goatee”. Not that Frakes didn’t already have a beard or anything, but we’d never actually seen him without the full thing, so it was a nice reveal.

3. Soval’s beard in “In a Mirror, Darkly” — Are you seeing a pattern here? Soval, a clean-shaven Vulcan ambassador in Enterprise, is now Admiral Black’s first officer, over in the “evil” timeline. And he has a lovely evil-Vulcan goatee. I mean, the episode is basically a quasi-sequel to “The Tholian Web”, which is on many people’s Original Series best-of lists; how else would his facial hair be styled? 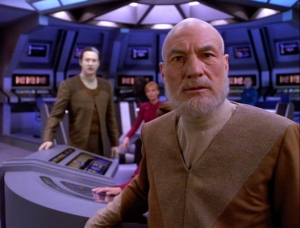 2. Picard’s beard in “Future Imperfect” — For about 25 minutes, this was one of my favorite TNG episodes, and let me just say that Patrick Stewart looks quite dapper wearing a neat gray beard that comes to a point somewhere below his chin. Who knew that this episode would be prophetic; it was set 16 years in the future, and almost two dozen years later Patrick Stewart appears to have aged very little. Must be all that tea, Earl Grey, hot.

1. Spock’s beard in “Mirror, Mirror” — This is by far the most quintessential “evil beard worn by alternate self” in fiction. It’s so pervasive in fiction that there’s a band by its name, and South Park did a reverse parody where it’s the good Cartman that has the beard, not the evil one. And yet, even though the crew was in the “evil” mirror universe, Spock himself wasn’t evil. He was simply a pragmatist who was doing the best he could, and if you believe in fan-fiction follow-ups, maybe one man can change the present.

Although Deep Space Nine is probably one of the most dramatic and serialized Treks we’ll ever see, it wasn’t much for AU beardage. Except for “Through the Looking Glass”, in which a version of Dr. Bashir who’s a completely warlike asshat has some facial hair. Best I could do.

Want to see what is probably the most ridiculous beard in the last 25 years of SF? Look no further than Jeremiah Crichton. 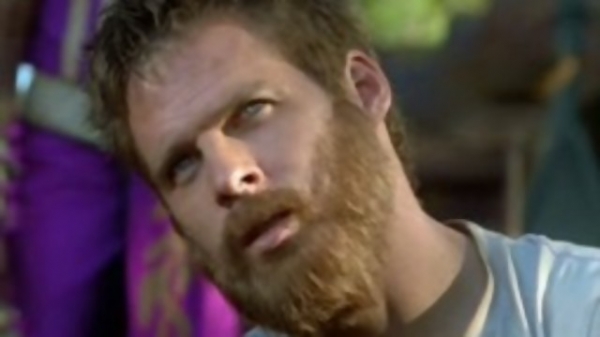 Someone in makeup seriously thought that was a good idea.