SIX OF THE BEST… reasons to show fewer movie commercials

You may be aware that a little movie called Rogue One is coming out on Friday. I’m certainly going to see it — it looks great.

Especially because of all the work I did to keep it that way.

Despite the glut of trailers, TV spots, released/leaked footage, rumors, and articles about the film, I’ve done my very best to avoid anything more than the official trailers they show in movie theaters. As such, here’s all I know about the movie:

So, with that in mind, here are six of the best reasons to show fewer movie commercials, release less information and “see the first eight minutes” to the public, and generally maintain the mystery. 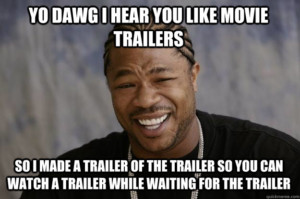 6. “See the first eight minutes” basically forces filmmakers to put useless scenes at the start of films. — Think about the last two Star Trek films. Into Darkness began with a chase scene as Kirk and McCoy stole something from some aliens while Spock tried to stop their planet from exploding. Beyond began with Kirk helping to negotiate a disagreement between two alien races*. After both of those scenes, we never saw those aliens or planets ever again. And we probably never will. While the scenes were okay, they ultimately didn’t add anything to the movie except runtime.

Alternate plan: Don’t do this. Eventually the reveal at the end of the released footage will turn into a clickbait headline that people who are trying their best to avoid info about the film will inadvertently read. This happened to me with several recent films and I’m sick of it. 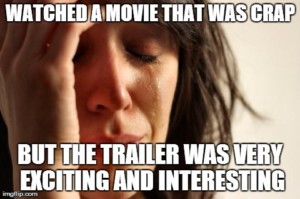 5. We know the movie is coming out; we don’t need an ad during every break. — Studios advertise big movies where they’re most likely to get the most eyeballs and interest. But over the past couple of weekends, I swear every break had an ad for either Rogue One or Collateral Beauty. I’m pretty sure everyone watching is aware that these movies exist. This was especially bad last year, though, with The Force Awakens and Batman v Superman — to the point that I would change the channel when the ad came on.

Alternate plan: Why not put the money into better, or different, marketing? Because if people change the channel to avoid seeing the ads, there’s a chance they won’t change back. Last Sunday I would look away from the TV during the Rogue One spots, or flip over to the other football game. That’s not ideal for the programs getting the advertising dollars. One spot an hour is plenty. 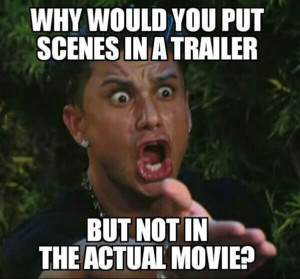 4. Don’t reveal giant secrets in the trailer. — The final Star Trek Beyond trailer revealed a somewhat-major plot twist, one that was so important to the story that screenwriter (and Scotty actor) Simon Pegg said publicly that, if you don’t want to be spoiled, don’t watch the latest trailer. That’s just bad marketing on the part of the studio. Now, trailers are generally made by the studio making 8 to 15 minutes of footage available to a trailer-making company, who then puts together the best trailers they can, but maybe don’t give them anything that could spoil the plot?

Alternate plan: Studios themselves need to write and cut the trailers. Maybe they do in some cases; I think they need to bring it completely in-house, and trailers should be approved by someone pretty high up in the production. The actual production side, not the money side — maybe the first or second AD, not the head of marketing. 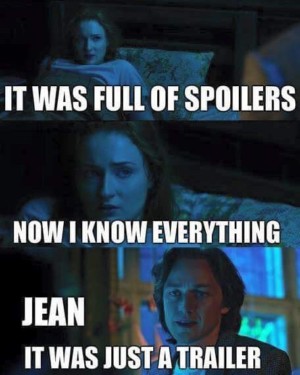 3. How much news about the movie do you really need? — When Star Trek VI: The Undiscovered Country came out in 1991, I only knew what was in the trailers and the little snippet of footage shown by Entertainment Tonight of the Rura Penthe sequence. But now, if I really wanted to know more about Rogue One, I could have been reading articles about it for months — speculation peppered with actual facts, photos of the cast or the set, leaks from the production, marketing materials sent out to sci-fi news sites… it’s endless. And given how huge Rogue One is going to be, it’s started spilling over into mainstream news as well. It’s been a challenge to keep away from the surfeit of information.

Alternate plan: Only so much information is available about any given film prior to its release, so it gets constantly reported and re-reported, introducing possible errors like a game of telephone. There really isn’t a way to stop this, not with our “drink from the fire hose of the internet” mentality. I just wish there was. 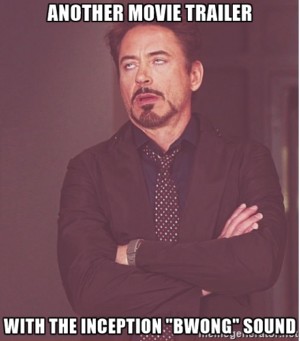 When M&Ms ads are making fun of something, it’s time to stop doing it.

2. Stop speculating based on toy sales. — While it’s certainly legitimate that if a Jyn Erso toy is released then she’s probably going to be wearing that outfit in the movie, I’m getting really tired of stories based solely on “we saw these toys so here’s what we’re speculating will be in the movie.” Just because, for example, the uniform on the Uhura toy has long sleeves, that doesn’t mean anything special. It doesn’t mean it’s going to be cold where the movie takes place; it doesn’t mean that she’s trying to hide scars or a tattoo. It just means the costume designers decided to give her long sleeves. That’s it.

Alternate plan: Look, I get it: the studios and production companies want their toys on the shelves and they want excitement generated for the film, but there’s a limit. And movie and sci-fi news sites need to slow their rolls and stop bombarding us with teeny tiny shreds of speculation based on a toy company’s products — which may not even be accurate. 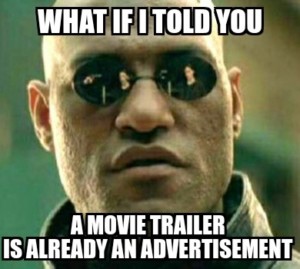 1. Tie-ins need to actually make sense. — When the second Hunger Games film came out, the studio (or, more likely, its marketing division) decided it would be a good idea to cross-promote with Cover Girl and Subway. Because when I think “teenagers killing each other while the entire nation is basically forced to watch”, I want to also think “hey, how about a subpar sub sandwich?”** A similar thing is happening with the Nissan Rogue and Rogue One — at least the name is similar, but you’ll never see a Nissan anything in a Star Wars film.

Alternate plan: If you’re going to tie your unrelated product to a movie, you at least need it to make sense — and be tasteful at the same time (Hunger Games and “hungry for Subway” is not in any way tasteful). The toy commercials for Rogue One (and the ones for The Force Awakens) were an example of the right kind of tie-ins. Cars and spy films works great; food and comedies, sure; Prilosec and Larry the Cable Guy was fine too because you could believe that he would use a heartburn medication. But I’ll never buy a Nissan Rogue just because it was shown as being somehow tangentially related to Rogue One. Neither will anyone else. 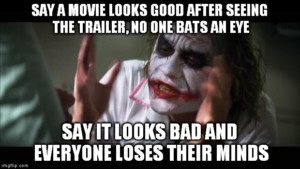 I realize I’m in the minority here. I realize that a great many people who are into sci-fi and superhero films want to know as much as possible going in, and I realize that even more people just don’t care if they find out or not. But I’ve already started mentally blocking out news stories about Spiderman: Homecoming because I want to preserve at least some of the mystery.

I just wish that movie and sci-fi news sites would help out the folks who are like me — the ones who want to maintain the mystery.

And so help me if anyone spoils anything about Episode VIII I am going to lose my shit. Seriously. I will lose it so hard that I will never find it again. 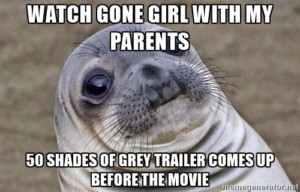 Even worse: seeing a movie with your boss and WHAM! NUDITY!

* Yes, I’m aware that the widget Kirk had at the start of the film came into play later. Just go with it, okay?

** I sometimes eat a Subway sandwich out of sheer curiosity or the fact that there’s nowhere else to go, but there are just so many better sandwich shops out there that Subway isn’t even my third option anymore.