I got into Tumblr in late 2008. I’m not sure how I found it, but once I did, there was no stopping me. I now have twelve different tumblrs, all of them for different subjects, and I follow more than 400. They’re not all nerdy, but a lot of them are.

So, what I did, just for you, was go through the list of who I’m following and pick out six of the best nerdy tumblrs, according to me. Some are general, some are single-use, and I guarantee your favorite won’t be on here. And that’s okay. Maybe you’ll find a new favorite…

6. Are You Talking to Meme? — georgetakei.tumblr.com — This one’s kind of a gimme, but it’s a good gimme. George Takei has embraced the social side of the internet like few actors his age have done, staying active on Facebook and Tumblr and posting as much meme-like content as he can. Takei is always good for a chuckle, although sometimes it’s a chuckle you’ve seen several times before. Focus: funny pictures, memes.

5. Obsessive Compulsive Desire — tumblr.bri-chan.com — This one is sometimes NSFW, so don’t look at it at work. Bri-chan is literally my oldest friend — we’re celebrating our 30-year friendiversary this fall. Because Bri-chan is both a brony and a furry, he runs in very different circles than I do, but never let it be said that the bronies and the furries don’t have lots of really funny stuff on their tumblrs that he can reblog for your enjoyment. Focus: anime, furry content, gay interest, my little pony.

4. Texts from Star Trek: The Next Generation — textsfromtng.tumblr.com — One of the things Tumblr is great for is creating single-topic blogs. One topic and nothing but that topic. In this case, a woman named Leah is mashing up Texts From Last Night with TNG screencaps. Great hilarity ensues. Some of the texts have NSFW words, but the pictures are only as NSFW as Star Trek ever is. Focus: star trek.

3. Just Say Narf — a-little-nonsense-now-and-then.tumblr.com — I’ve been following this guy for a while now. He posts a lot of amusing content, but one of my favorite things about his tumblr is that there’s a good bit of Discworld stuff on it, and I love me some Discworld. Focus: discworld, fringe, gifs.

2. Missocki Rocki — missocki.tumblr.com — Yeah, because you really thought I’d let you escape without a Buffy-centric tumblr, right? This one is mostly Buffy with a focus on Willara (Willow/Tara shippers), but there’s also some good subverting of real-life tropes and a lot of gifs. And a little rugby discussion too, because I think she plays rugby. Focus: buffy, tara, willow. 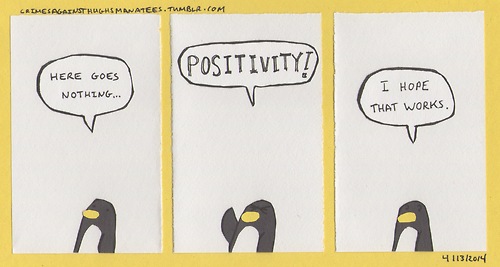 1. A Tall Ship and Some Contraband to Fill it With — ussawesome.tumblr.com — According to her “about” text, the person who runs this blog is named Lauren, and she is a queer Gryffindor. She also loves Star Trek, which is how I found her in the first place. If you want to look at one tumblr each day that personifies what the site is about, this is the one: she posts about Dr. Who, positivity for non-cis individuals, gender and sexual equality, and her own life. She’s one of the first people I followed on Tumblr. You should too. Focus: dogs, sex positivity, star trek, subtext.

Do you like Buffy, Star Trek, cute animals, and fart and poop references? If so, you could always follow my tumblr. Y’know, if you want.