SIX OF THE BEST… movie sequels in 2017, revisited

I was checking my Facebook “On This Day” page this morning* and a link to my best projected sequels of 2017 column came up. For funsies, I re-read it, and as it turns out I did actually see all six sequels. So let’s revisit that column; it’s time for me to rank six of the best movie sequels in 2017. As usual, there will be spoilers. 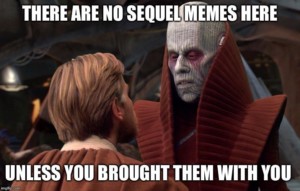 6. Justice League — Technically the next sequel to Batman v Superman was Wonder Woman, but I didn’t really make that connection at the time. Of the six films I listed, I liked Justice League the least. Which isn’t to say that I didn’t enjoy the film, but given all the behind-the-scenes stuff, I found it often tonally uneven, too-often cliche, too willing to put Diana in the backseat, and too reminiscent of Avengers: Age of Ultron (what with the final battle being in some random Eastern Bloc country somewhere, instead of in the US). It was both too long (felt bloated in places) and too short (not enough time to develop all the characters). I could really see where the original two-movie plan was abridged into one. I did, however, really like Flash, Diana, Batfleck, and the fact that Cyborg (not one of the main three heroes) was a vital part of defeating the big boss.

What’s next? Jason Momoa’s Aquaman was a great update on the character, especially given the beating Aquaman has taken in the world of memes these past few years. I was expecting more Khal Drogo and less Dean Winchester out of the character, but I still liked him, and I’m sure Aquaman (12/21/18) will be a perfectly cromulent action-adventure movie with some annoying DCEU tie-ins.

Will I see it? Probably. 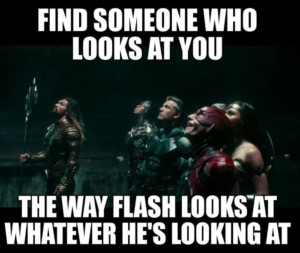 5. Guardians of the Galaxy, Volume 2 — I think my main problem with Guardians 2 was that it was basically the first movie, only with more stuff — more space battles, more explosions, more characters, more of Drax being probably the best part of the movie, more Star-Lord having mysterious powers, more Groot (albeit in baby form). Now, to be fair, I laughed my ass off during this movie and even though it slowed down a bit toward the middle I still kept up with it. Yondu’s character arc was great, and of course Drax (although I could do with less forced/fake laughter), but I didn’t care about the villains (except for noticing Elizabeth Debicki from The Night Manager being one of them) or the drama with the Ravagers — which, thankfully, did slot in neatly with what was happening with Ego. Terrible name for a villain, by the way. Unlike the first Guardians, this movie felt more like it was trying to set up the next films than actually just being its own space adventure.

What’s next? Chronologially, the next MCU movie is Black Panther, which looks like it’s going to be great. I just hope they don’t spend too much time trying to link it to the other movies, lest we end up with the same problem as Guardians 2.

Will I see it? Yes, but not opening weekend.

4. Kingsman: The Golden Circle — This was the only movie my wife and I saw this year where she said there was no boring part in the middle. I’m not sure I fully agree (the sequence at the music festival felt a bit weak) but I did enjoy the hell out of this movie. It was funny, clever, poignant where it needed to be, and, as with the first one, the villain was trying to take over the world by doing something that seemed completely legitimate: Samuel L. Jackson used cell phones, and Julianne Moore used drugs. Elton John was a hilarious addition, and I appreciated that Eggsy actually dated the princess, instead of just having sex with her and running off — which I guess should not have surprised me, because Eggsy’s characterization in the first movie showed that he was loyal and cared about others. If it had flaws, they were that things seemed too complex at times and that I didn’t really understand how Oberyn Martell was a traitor — I don’t think it was set up well enough or explained clearly enough.

What’s next? The director says he’s already planned out the third movie in what will eventually be a Kingsman trilogy. There hasn’t been any talk about the plot, content, or villain, but I’m sure it’ll all be suitably spoiled for people like me who just want to see two trailers and then go to the movies unsullied (which I’ll talk more about a little way down). 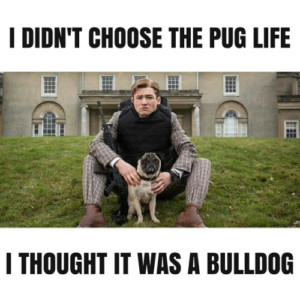 3. Logan — I’m pretty sure I got exactly what I expected from Logan: old Wolverine dealing with getting old, a road movie, and Patrick Stewart. I did not expect Xavier to be killed, though, and while I completely bought into Logan’s body breaking down I think the battle at the end was almost too low-stakes for me. The whole thing in the middle with Eriq La Salle’s family didn’t fit. And there was a giant logic hole as to how Daya’s mom from Orange is the New Black got her hands on such specific footage, edited it together, did a voiceover, and managed to get it to Logan in the first place. Still, there was a lot of great action (I don’t think the film would have been nearly as good without the R rating) and Dafne Keen was a joy to behold.

What’s next? While Avengers: Infinity War is technically next, I’m saving that for the end. Instead, I’ll mention the film coming right after that one, Ant-Man and the Wasp. I did not see the first Ant-Man, and honestly I didn’t feel like I needed to. I’ve seen all those story beats before, and after watching the trailers plus CinemaSins I knew all I needed to know to understand his powers in Captain America: Civil War. 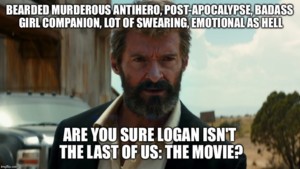 2. Star Wars: The Last Jedi — The more I think about The Last Jedi, the more I see issues and plot holes. The entire Luke/Rey sequence lasted a day; the casino planet (and DJ) was an unnecessary diversion; Admiral Holdo came out of nowhere… I could go on. But despite all that I really liked the movie and I think it’s one of the top three of the franchise. It felt like a Star Wars movie while also subverting expectations and nodding to the viewers’ genre awareness. Also, the fact that I legitimately believed Rey might join Kylo Ren spoke to how well-written this movie was. I was lucky to go into this movie mostly unspoiled; I only saw the first two trailers, and was very careful to avoid anything about it after that. Which, let me tell you, was really hard; you can’t read almost any nerd news or movie news site without reading about Star Wars. I’m worried that it’s only going to get worse for the next one.

What’s next? Solo is technically the next Star Wars film, although really everyone is looking forward to Episode IX. I’m sure Solo will be fine; I don’t know much about it, because I’m being careful to avoid spoilers. As for the next “real” Star Wars movie, I do know it doesn’t yet have a name** but it does have a director (JJ Abrams), and I can only hope that the script isn’t fully Abrams’d because otherwise we’ll just get another Return of the Jedi. The Porgs were okay because they weren’t a major part of the narrative, but if we get Gungans or Ewoks again a lot of people are going to be really pissed off. Including me.

Will I see it? Definitely, on both counts; Episode IX on opening night and Solo probably in the first week sometime. 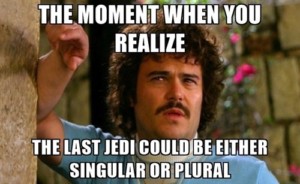 1. Thor: Ragnarok — By far this was the best stand-alone Marvel movie of the past few years. It was clever, well-written, well-directed, and, above all else, it was fun. Taika Waititi allowed improvisation, kept the film’s pace moving quickly, and really gave us a great Planet Hulk movie. Unfortunately, it also had that whole mess at the end with Hela, but that can’t be helped. I also wasn’t a huge fan of Jeff Goldblum’s character, which was basically Jeff Goldblum in weird makeup. But I was a fan of not forcing a romantic subplot between Thor (or Hulk) and the Valkyrie (one of only two female characters with substantial speaking parts) like they did in Doctor Strange. (I just did not give a damn about Bandersnatch Cucumber’s relationship with Rachel McAdams. Not one tiny bit.) Overall this was definitely my favorite superhero movie of the year, and only lost out in overall action by a sliver to Atomic Blonde. I really hope Marvel continues to let Waititi have a free hand in their universe; they can only benefit from it.

What’s next? I’m a little worried about Avengers: Infinity War. As with Justice League, it’s been smooshed together from two movies into one (and rightfully so — moviegoers don’t have the patience anymore for two-parters like Harry Potter, Twilight, and Hunger Games), so there are concerns around pacing and bloat. I’m hoping that the Russos, who did such a stellar job with Captain America: The Winter Soldier, will be able to manage those issues, but even if they do, there are still too many characters, too many plotlines, too many egos (character egos, not actor egos; it seems like everyone working on the Marvel movies is pretty cool), and too many stakes. Like, okay, Thanos wants to… rule the universe? Destroy it? I don’t even know. I’m avoiding trailers and articles as much as I can.

Will I see it? Definitely. 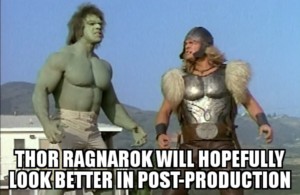 If you take out all the superhero movies I saw, I still went to the theater a hell of a lot in 2017. Here’s my six favorite non-superhero films (that I saw in theaters) from last year… and, again, beware spoilers:

Just missed it: Three Billboards in Ebbing, Missouri and Colossal. I really wanted to squeeze the latter in there somehow because it was way better than I expected it to be, but it just couldn’t beat out the others.

PS: I also greatly enjoyed Wonder Woman, even though they didn’t use her name and there were no real stakes (because she clearly was alive 100 years later, in BvS). 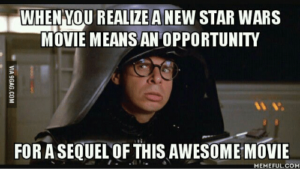 Spaceballs 2: The Search for More Money

* This was December 28 of 2017. I write these columns as I have the ideas for them and then schedule them. Just work with me here, okay?

** In the almost-four weeks since I wrote this, that may have changed, but I’m not going back and making edits. I’m committing to it being unnamed and hoping for the best.