I work in a cubicle. It’s an open cubicle, so I’m not isolated or anything, but it’s still a cubicle. I sit here for about nine hours a day, minus meetings. So of course I’m going to make myself a comfortable place to exist.

You can learn a lot from my cubicle. Here are six of the best lessons I basically pulled out of my ass in an effort to get this column done on time. 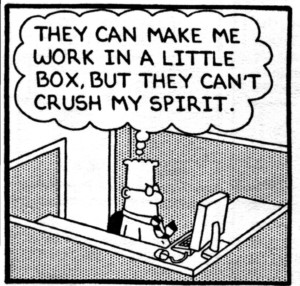 From Dilbert, by Scott Adams

6. Peanuts Characters — I’ve been a Snoopy fan pretty much all my life. One of my first stuffed animals was Snoopy; I had a VHS tape of Snoopy movies and cartoons; I had a bunch of Snoopy collections; and, when I found a cache of old-school Snoopy digest books in my aunt’s old bedroom in New York, and she said I could keep them, I thought I’d hit the jackpot. So of course I’m going to put Snoopy characters in my cube.

I actually have two sets, both of which featuring the same characters: Lucy, Linus, Snoopy, and Charlie Brown. Funko versions sit on top of my secondary monitor, staring at me with black button eyes. To my right, though, are characters in action, all of them smiling. They help to remind me that there are simple pleasures in life: dancing, blankets, kites, and roller skates. I really only like one of those, but I understand the concept, and I try to remember the simple things and how good they can make me feel when I concentrate on them. 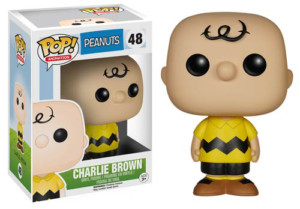 5. Ozy and Millie comic strips — Ozy and Millie is one of my favorite comic strips. It’s anthropomorphized animals in elementary school, their parents, and their lives in general. It usually makes me laugh, but it also teaches important lessons about bullying, acceptance, and friendship.

Of course, the ones that are on my wall are more humorous than anything else. I have one about surveys, one about Super Mario Bros, one about the news, and one about — what else? — poop. And then there’s the single panel that better fits my personal issues with depression: Ozy says that life is full of disappointments, and Millie (his best friend) says, “no it isn’t. I can always fit more in.” It’s humorous at first, but it has a deeper meaning that, when I’m feeling down, actually kind of makes me feel better in a weird way: no matter how bad things are, they could always be worse. I’m never so far down that I’m at the bottom.

4. DenverCoder9 — “DenverCoder9” is a fairly-famous XKCD comic about a developer who, when scouring the internet for help, finds only one post even close to what he needs to know, but it was posted ages ago and there were no responses.

As someone who has been a web, ad, or application developer continuously over the past 11 years, I identify with the main character here. Finding help online with issues in code has gotten much better, especially with the proliferation of popular libraries such as Greensock, jQuery, and Bootstrap. But I guarantee you that, at some point in your career, if you’re a developer or coder of any kind, you’re going to face an issue just like our main character here, and when you find your own DenverCoder9, you too will ask: “What did you see?” This comic reminds me that I am not alone in the universe, even if there only ever was one person out there who had the same problem I did. 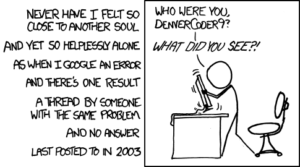 From XKCD, by Randall Munroe

3. Star Trek toys — I have six different Star Trek toys on my desk: a die-cast Enterprise-D (the saucer really separates) that was a gift from my wife, a tiny plastic USS Farragut from Generations, a TOS-era Spock, and three characters from The Wrath of Khan: Scotty, Admiral Kirk, and Khan himself.

Star Trek has been a huge part of my life pretty much as far back as I can remember. It was something my dad and I watched together; it was something my friends and I talked about; and, as an adult, it’s something that I mine endlessly for column and article ideas. It was my on-ramp to science fiction, and as such I like to believe that, someday, we will get to that better future. Someday, humans and aliens of all shapes, sizes, colors, and beliefs will work together toward a common good. Right now it seems really unlikely that humanity will ever get there, and my current sci-fi writing reflects that, but it’s important to have hope. 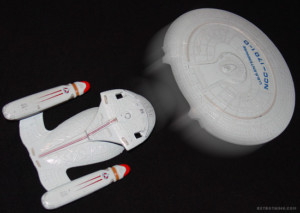 2. A Man Pile-Driving a Shark — Way back in the old days, my job had ISDN-level internet. It was about the same speed as 3G internet is today — which, in 2002, was pretty darn fast. Not as fast as the DSL I had at home, but still. Anyway, when I would get to work, I would open up all the different comic and funny picture websites I read every day, and my coworker Sam would say, “get ready for the internet to slow down; here comes Josh’s Mondo Crap!” To this day, my folder of bookmarks I open every morning is labeled “MC”.

Anyway, one day I found an image of a man piledriving a shark, with a caption reading “if you don’t see why this is awesome, you can’t enter my office.” I’ve kept that printed-out picture at my work area for fifteen years, and it helps me to judge who has a sense of humor and who is being super-serious. Since I like to be snarky at work, it’s important to know who’s on board with that and who’s not. A good lesson: know your audience. 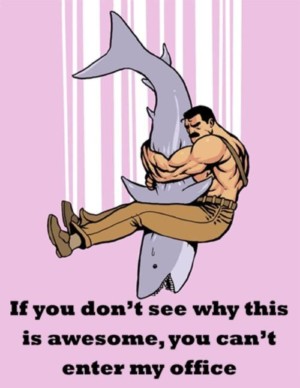 1. Death — I’m talking specifically about Death of the Endless, created by Neil Gaiman. I enjoy reading about various incarnations of Death, from Terry Pratchett’s (tall, black cloak, scythe, TALKS LIKE THIS) to Amber Benson’s (a fashion-conscious twentysomething who inherits the job from her late father) and beyond. But Gaiman’s has always resonated with me, and so the very first thing I put on my desk when I get a new job is my little Death figurine, and the very last thing I take home when I leave a job is that same figurine.

Why do I love Gaiman’s Death? Because of the joy she takes in meeting people. While she fulfills a necessary space in the cycle of life, she isn’t morose or sad. She sees the best in people, and that is something I have trouble doing… especially at work, when often my internal customers can be frustrating in thousands of little ways — they ignore what I say, or intentionally do the wrong thing, or don’t read the directions, or do end-runs around procedure, or any combination of those things.

Plus, Death teaches us an important lesson: “You get what everyone else gets: you get a life.” It doesn’t matter who you are. You get a life. Just the one. So it’s incumbent upon you to make the best of it in whatever way you think that should be done. Not because Death says so, or because any other deity is standing over you and judging you, but because it’s your life. 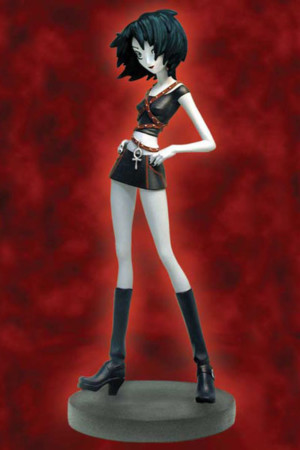 The “manga” Death statuette lives in my living room at home, watching over me.

Here’s a list of other interesting things on my desk that I haven’t mentioned, in order from right to left: