Terry Pratchett’s Discworld is a sweeping saga of more than 40 books (not including additional material like maps, recipes, and science texts), and it can be daunting to try to get into. There are several different storylines — the Watch, the wizards, the witches, Susan, Tiffany, Moist — and to be fair the first novel, featuring Rincewind, isn’t necessarily the best place to start.

When I tell my friends about the Discworld, I try to give them good places to onramp into the series — that is, a good book to start with so they get into it, enjoy it, and then go back and read the others.

So, if you’ve never read Discworld, or are trying to get a friend into it, here are six of the best Discworld onramps. 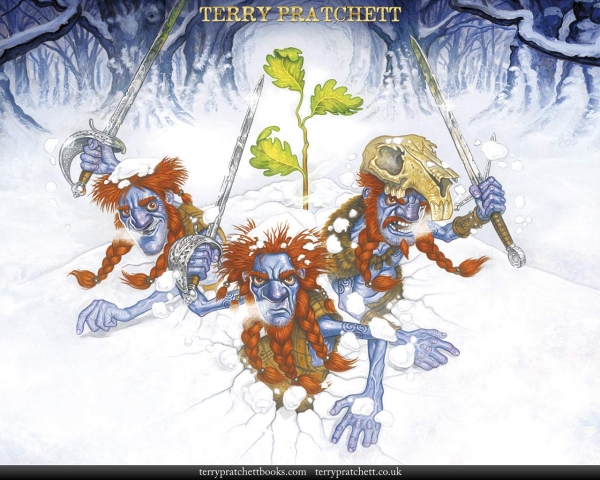 6. The Wee Free Men — If you have kids, this is the place to start. It’s the beginning of the Tiffany Aching saga, it takes place in an entirely new part of Discworld (the Chalk), and it doesn’t require prior knowledge of anything in the series. It’s also witty, occasionally uproarious, and has a great message for kids: sometimes you have to save the day and then let someone else take the credit. Plus, if you do voices, there’s lots of good ones here, from Wentworth to the Feegles.

5. Wyrd Sisters — To be fair, I didn’t love Wyrd Sisters. It’s not my favorite book, and I don’t think it’s in the top 50 percent of Discworld novels. But it does bring us the three witches — Granny, Nanny, and Magrat — and they become important in several future Discworld stories. While Granny is actually introduced in Equal Rites, that’s not a good onramp book. This one satirizes Shakespeare (as does its sequel-plus-one, Lords and Ladies) with almost a direct retelling of Macbeth and Hamlet. There’s humor of the type we saw in Shakespeare in Love, so if you liked that, you’ll like this. It’s a harder book to get through, but it’s worth it in the end.

4. The Truth — This is a controversial choice, I think, because understanding how The Truth works really depends upon knowing enough about the Discworld’s relative level of technology, government, sociopolitical structure, and even many existing characters like Vimes, Angua, Gaspode, and the various guild members. But it’s kind of like an island in the stream — you can stop, have a little picnic, get some sun, and then continue on your way. It introduces a very new wrinkle to the Discworld in general (the printing press and, as a result, the free press) and also brings us Harry King (who returns in several future stories), and it’s important to read, and I think readers who have jumped into fantasy serieses mid-way through will be fine, but I’d be careful who you suggest this one to. You’re going to need to provide a lot of background to your friend, or, if you’re reading the book, spend some time on Wikipedia. 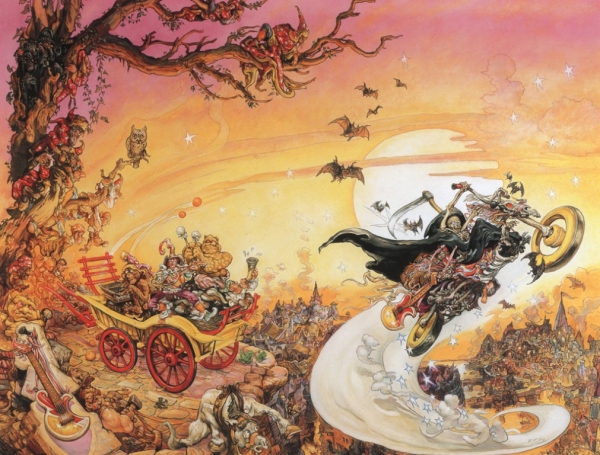 3. Soul Music — While Mort actually introduces Death’s apprentice and daughter, it’s Soul Music where we first meet Susan Sto Helit. This book contains the wizards as ancillary characters, but it’s really all about Death, Susan, and a satire of the 50s, 60s, and 70s music industry. It stands alone well enough, though not perfectly; the reader has to be willing to accept that Death is an anthropomorphic personification who can travel through time as needed but doesn’t because of Reasons, and some of the history (such as the hatred between Dwarfs and Trolls) needs to be taken on faith, but overall it’s an excellent, hilarious novel with lots of wordplay and a suitable amount of action.

2. Men at Arms — This is possibly my favorite Discworld novel. It’s the second in the Watch storyline, but the first Watch novel that I read. Pratchett does depend a bit on the reader knowing about the Discworld, but prior to this I’d only read Moving Pictures and that book definitely set me up to understand what was going on. It’s kind of dark in places, despite its humor; it features a talking dog, guns, murder, cop drama, romance, and clowns. But in terms of being a complete novel, this is the one I recommend second-most-often. The first… 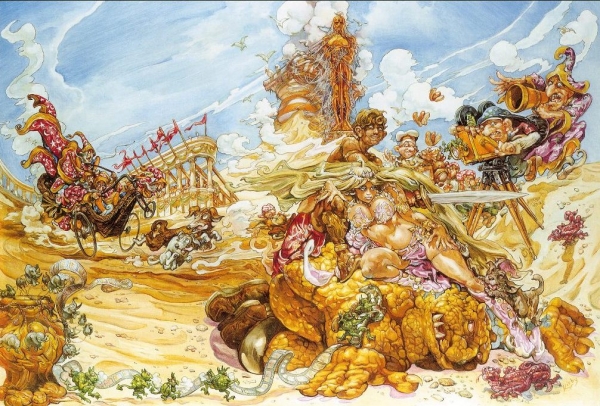 1. Moving Pictures — This is the first Discworld novel I ever read, and I count myself lucky that it was. It’s almost completely self-contained; it starts the second iteration of the wizards storyline with the introduction of Archchancellor Ridcully, it addresses the little-used characters of the alchemists’, and it’s a pitch-perfect satire of Hollywood in the early days. The main characters, with the exception of Ridcully, Gaspode, and Ponder, don’t appear much (if at all) in the future, with the exception of some of the associated wizards, and at the end everything is tied up with a relatively-neat little bow. If you only ever read one Discworld novel, this is the one that you read.

If you can get your hands on it, the second Discworld computer game is a ton of fun to play. Eric Idle stars as Rincewind the Wizzard (that’s not misspelled; trust me) and he goes through several different Discworld stories, including Moving Pictures, Men at Arms, Reaper Man, Hogfather, Mort, and Soul Music. In the tradition of Sierra games, you’ll find a lot of things that seem to make no sense, and if you haven’t read most of the books through 1998 you may not get a lot of the jokes. I suggest playing it with a walk-through so you can see all the coolest stuff without going nuts trying to figure out how to do things exactly right.

Skip the first one, though. It wasn’t that good.