I was originally going to start this out by suggesting six of the best webcomics for you to add to your reader/Facebook/whatever-catcher you use, but let’s be honest… we’re all already reading XKCD, Questionable Content, Something Positive, and Least I Could Do, right?

However, there have been many webcomics that have ended over the past decade (which is when I started reading them), and I think that might be more interesting. Or at least give you something fun to read at work.

Please remember — this is just my opinion. If I missed one you love, put it in the comments.

6. Theater Hopper by Tom Brazelton — As a movie geek, I loved comics about films. Though TH’s humor didn’t always hit the mark with me in terms of lols, I usually appreciated Tom’s commentary on film, film culture, and Hollywood. The comic ran for about 12 years, though it got more sporadic in nature as the author’s children were born. Though I never looked forward to new episodes, I always enjoyed it when one appeared. A fun read. Sample strip: Affleck Hunting Season

5. Everything Jake by Mike Rosenzweig — Kid goes to college. Kid gets roommates. Kid is some form of the Chosen One, and other folks in the dorm are inventors of some sort. Occasionally there’s a script without art. EJ is hard to classify, but fun to read, with art that looks like pencil/pen-and-paper and a good stylized version of the college experience. This ran for about eleven years, took some twists and turns, and ended up okay. Worth a read if you went to college between 1995 and 2005. Also, it was one of the first webcomics that I read to look straight at the horror of the 9/11 attacks and show us how characters would really react. Sample strip: Tuesday September 11, 2001, part 7 of 15 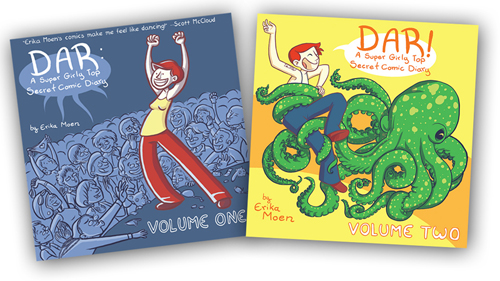 4. DAR! by Erika Moen — The more astute readers among us may know Erika Moen as the author of Oh Joy Sex Toy (NSFW, obviously), but I was first exposed to her via DAR!, which is a combination of stories about growing up, finding love, and farting. A good fart joke is a winner in my book, and Erika’s writing (I’m really more about words than art when it comes to comics) kept me reading through the entire DAR! archive — I found it after it had already ended. You’ll probably enjoy it too. Sample strip: Cuddlefart

3. Angst Technology by Barry Smith — This one only ran for about five years, but I still found a lot of great humor in it — especially Dante’s comment about his wife cleaning their house before the cleaning lady came. Similar in nature to the TV program Code Monkeys (although much less scatological and puerile), the comic focused on a computer software company, with forays into gaming, horror, pop culture, and geekery. As I recall, it was black-and-white, with bold lines and not a ton of shading. It sort of disappeared one day and I never found out where it went until today: the author changed the focus of his site and eventually put up the archives. Go check them out. Sample strip: Mine 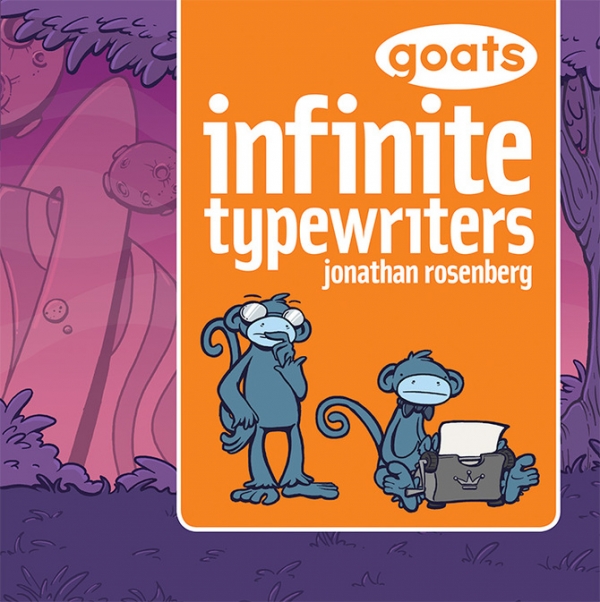 2. Goats by Jonathan Rosenberg — I miss Goats. A lot. Ostensibly the tale of Jon (a programmer), Phillip (who drinks a lot), Toothgnip (their pet goat), and Diablo (their satanic chicken), the comic often veered into the ridiculous before dragging itself back into the real world. Though it began on April 1, 1997, the universe of Goats became more of a crazy-ass multiverse around 2002. That’s about when I stopped reading. Still, though, Goats of old remains a fond memory, and I think it would do very well rebooted as a web video series. If any producers are listening… check it out. Sample strip: Bitchin’ Raiments

1. Ozy and Millie by DC Simpson — Dana Simpson, who now writes  Heavenly Nostrils, may be best known for the adventures of Ozymandias J. Llewellyn (a gray fox whose adoptive father is a red dragon) and Millicent M. Mudd (a red fox, Ozy’s best friend, and the daughter of a lawyer mom and a pirate dad). Possibly one of the best successors to Calvin and Hobbes in terms of storytelling, style, and general enjoyment, O&M ran for just over ten years and had what I would consider a very satisfying finale that was built up to for at least five years. Featuring a mix of kids-seeing-the-stupidity-in-the-adult-world, dealing with bullies, surrealism, political and social commentary, and the occasional outright poop joke (“I have to go home right now” is one of my favorite lines from Avery the Raccoon), O&M is, in my opinion, one of the ten best webcomics to have run this century. If you read any of the six webcomics on this list, this is the one you should read. Sample strip: Mom, what’s a filibuster?

Whoever thought a webcomic could never make me cry obviously never read one of the most powerful storylines in all of Something Positive‘s long history. People die in real life. They really, really do. But sometimes we can give them a good send-off, and in this brief arc, that’s exactly what RK Milholland does with his main character’s mother. Grab your tissues.