SIX OF THE BEST… Cardassian philosophies

Cardassians started out as reptilian bad guys on Star Trek: the Next Generation. All we knew about them was that they had no honor (per Worf) and that there had been a long conflict between them and the Federation going back at least to when Picard commanded the Stargazer. They’re a central figure on Deep Space Nine, and several books explore their culture (and the Cardassian war and occupation of Bajor) in great detail.

But no culture is completely evil, and even “evil” cultures can have their good points. It’s with that in mind that I present six of the best Cardassian philosophies. 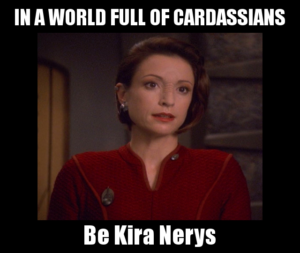 6. You can’t save everyone. — Cardassians are pragmatists, more so than pretty much any other race on Star Trek that I can think of. This was especially illustrated in “Our Man Bashir”, the Deep Space Nine episode where Bashir and Garak are trapped in a holodeck spy game because of Reasons. Bashir tries to make sure that everyone lives, but Garak believes it would be better to let someone die to ensure their (Garak’s and Bashir’s) survival. And despite the fact that there are five main characters with their lives at stake (six if you include Bashir) he’s absolutely right. Sometimes you have to make the hard decisions.

Cardassian fun fact: Marc Alaimo, who played Gul Dukat, has portrayed two different Cardassians, a Romulan, an Antican, a Human, and a Bajoran (technically). And since the end of Deep Space Nine, Alaimo has only appeared on TV once, and that was just as a voice on Family Guy. 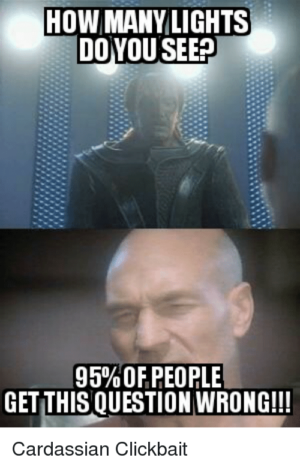 5. Family is important, even if it ruins you. — Gul Dukat did a lot of reprehensible things during the Occupation, including cheat on his wife with a Bajoran woman who then gave birth to a half-Cardassian-half-Bajoran child. Originally Dukat plans to kill the child, Ziyal, to preserve his standing and his marriage, but he is convinced by Major Kira to take a different path. And, as we see through several future episodes, Dukat actually does care about Ziyal. He didn’t want to kill her in the first place, but his pragmatism said he needed to do it to preserve his position. And, later, it is clear he still loves her even when she undermines him yet again during the Dominion War.

Cardassian fun fact: Andrew J. Robinson, who plays Garak, is 80 days older than Marc Alaimo, who plays Dukat. Both were in their early 50s when they started their roles on Deep Space Nine. Robinson, by the way, originally auditioned for the role of Odo. 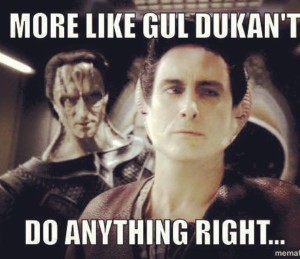 4. Sometimes you have to work with the bad guys. — On several occasions, we see Cardassians working with the Federation or the Bajorans because there’s no better way to get the job done. This is pretty obvious in “The Wounded” — aka “the one where Cardassians wear ridiculous helmets” — when the Cardassians have to work with the Enterprise to stop a renegade Starfleet officer from killing their people. It’s quite clear Gul Macet isn’t a fan of working with Captain Picard, but it’s the only way, and he swallows his pride (and Cardassians have a lot of pride to swallow) and does what he has to do.

Cardassian fun fact: Paul Dooley, who played Garak’s father Enabran Tain, used to be in a comedy duo with Richard Libertini, who played the “real” Emissary that came through the wormhole in Season 4. Now there’s an odd couple. 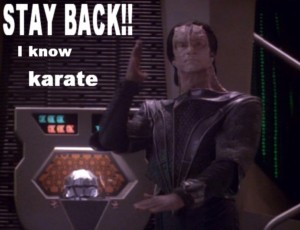 3. Done is better than perfect. — Although it is “unsafe”, Cardassians have a wider margin of error in their engineering — 20 percent — than Starfleet, who believes everything should be as good as possible all the time. The thing is, that’s just not possible in all instances, and anyone who has been assigned a large amount of work and not enough time to do it knows that sometimes you just have to cut corners. It sucks to admit it, but it’s true. The Cardassians build this into their systems rather than reprimanding people for not doing as good as they possibly can. Again, pragmatism. 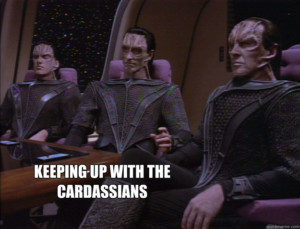 2. Punctuality is a virtue. — It drives me crazy when people aren’t on time for things. I’m usually a few minutes early, and I get angry when I can’t be. When I make an appointment with someone, I expect that person to show up on time. So do Cardassians. I like that about them. They also pay their bills on time, apparently.

Cardassian fun fact: Casey Biggs, who played Damar, is Roxann “B’Elanna Torres” Dawson’s ex-husband. And Dawson, when she was just Roxann Biggs, was on a terrible show about nurses called Nightingales that got cancelled after 13 episodes. 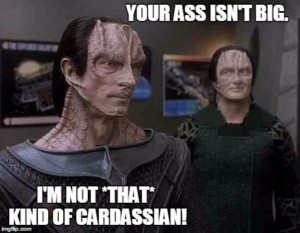 1. Education is the key to success. — While Cardassian educational systems exist to indoctrinate children to love, respect, and fear the state, it’s quite telling just how much importance they put on teaching their children. Being good in school is highly desirable, and Cardassian children are not shamed by their peers for being intelligent and well-behaved. Plus, the Cardassians have excellent mind-training programs that help their children develop eidetic memories, and those can be quite useful.

Cardassian fun fact: Like Marc Alaimo, David Warner — who played Gul “how many lights do you see” Madred — has had multiple roles in the Trek universe. In addition to Madred the Cardassian, he has also been a Klingon and a Human. He took the Madred role because he was friends with Patrick Stewart and wanted to work with him, but because he only had three days’ time to prepare most of his lines were written on cue cards hidden cleverly around the set. 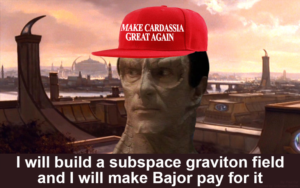 I’m sure by now we all know that Donald Trump has been inaugurated as the 45th President of the United States. I’m writing this the day before the inauguration, so I don’t know if he’s going to continue his habit of using Twitter as yet another bully pulpit, but I do know that Joe Sondow — creator of, among other accounts, @RikerGoogling and @WorfEmail — has started tweeting as Gul Dukat under the account @realRealDukat. Every tweet is a send-up of one of Trump’s tweets, and at this point he’s been elected Federation President over Admiral Janeway — and he’s taking over for President Sisko.

Don’t lie: you know Benjamin “angry space dad” Sisko would be a damn fine President — of the Federation or of the United States.