Well, it’s Sunday, so you know what that means.  It’s time for another shameless plug.  And this one, kiddies, has a bumper crop of goodies to feast upon.

I first met George O’Connor at Wizard World New England, back when that was a thing, several years ago.  I was with artist Tracy Lee Quinn, pushing our short story, “The Carnival of the Disarming”.  O’Connor was there with his artist Griffin Ess.  They were selling buckets of tears and all the feels or, as the cover of their books reads, “Healed”.  The aforementioned description is probably more fitting but I’m not going to get in the man’s way when it comes to storytelling.  He really does have that job on lockdown. 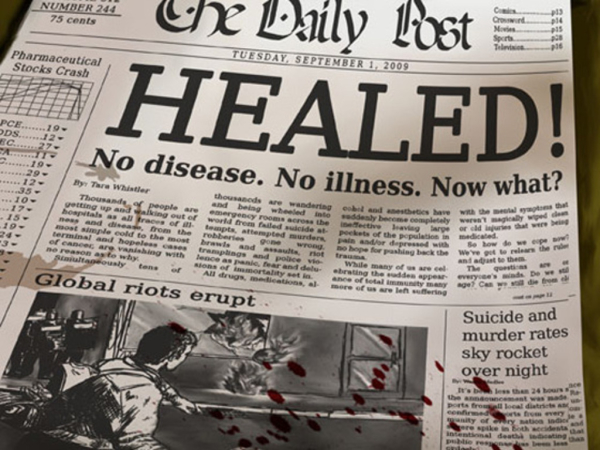 “Healed” is a look at a world where disease is just…gone.  The world wakes up one day and everyone is, as the title indicates, healed.  Sounds nice, right?  Well don’t be so fast to have things figured out.  Expand on the idea.  What would be affected by a total lack of illness?  Available food resources might be an issue.  What about the pharmaceutical industry?  Hospitals?  Doctors?  How do these things play in to the economy?  Now think small.  What does this sudden cure to all disease mean to those who have said their goodbyes?  O’Connor and Griff with their storytelling hit all the big notes but did and equally marvelous job at the nuanced little ones.

I read the books they had on hand at the time and, if memory serves, the next day I tried to strangle O’Connor with his own boyishly charming smile for making me feel all sorts of squishy, scary feelings.  During the whole incident I believe I was sobbing and thanking him for hurting me.  The book hurt that good.

“Where can I find a way to hurt myself in the same manner,” you ask.  Well, I’m glad you asked.  You can go on over to www.homelesscomics.com to pick up your very own copy of “Healed” and, hey, while you’re there, you might want to check out their new gem, “Baby”.  No, they aren’t doing something horrible with infants.  They’re doing something glorious with a little baby kaiju…who might just be destroying part of the Eastern seaboard.  Just saying but that alone is worth the price of admission.

So there you have it.  Wonderful comics.  What’s that?  You want more?  OH, BABY, HAS HE GOT MORE!

So, you remember how I mentioned that O’Connor “hit all the big notes”?  Well, those aren’t the only notes this guy hits.  He mentioned during out first meeting that he was in a band.  I was intrigued. 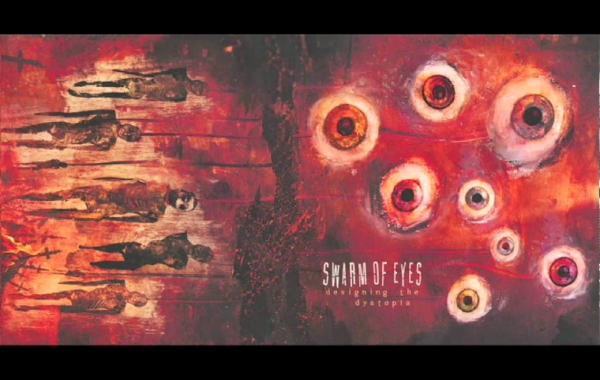 You’re brain is obviously lame.  Don’t worry.  Swarm of Eyes is the cure.

I was trying to describe S.o.E. to a friend of mine the other day and the best description was this: Imagine old school Metallica fronted by Wayne Static (R.I.P.) watching hours of “Metalocalypse” inside of a clothes dryer that’s been set to ‘face melt’.  That’s the best I can come up with and I think it’s more than fitting.

Swarm of Eye’s album, “Designing the Dystopia”, feels like a fresh new take on a classic formula.

Blazing speed and punching crunch with classic flair on guitars

An instant classic for metal fans

Need proof of the pedigree I’m talking about?  Head on over to their website, www.swarmofeyes.com and give it a listen.  This music makes me think of the end of days and the scarier parts of Halloween ghost stories.  Truthfully, some of these songs make me want to go to war against mountains.

As an added bonus, just so you don’t think these guys are just hold up in a basement recording, I recently caught their live show at the Hard Rock Café in Boston.  They punch just as hard in concert as they do on their record so if you see them live I would recommend full hockey pads and an adamantium codpiece.

When I first met George one of the things he was selling were DVD’s for a webseries he had produced, directed and was the head writer for.  The name of said series was “664 – Neighbor of the Beast”.  I thought, sure, why not.  I bought both seasons and brought them home with me…and then I forgot about them for a few weeks.  In my defense I had taken home a massive haul from that con and it took me a while to get through all of it.  When I finally did get around to watching it with my wife we found ourselves hooked.

The true mark of whether something is funny, for me, is whether I find myself quoting it out of the blue long after I finished watching it.  We both found ourselves doing just that long after we finished watching them.  From out of nowhere one of us would look off in the distance and exclaim “OW, HUMMINGBIRDS!”

The premise is simple, a young couple buy a home and it just so happens that it’s right next door to a guy named “Lou”.  Lou just happens to have red skin and horns but because they meet him on Halloween they think it’s a costume.  That misconception doesn’t last too long…and hilarity ensues.

Now what would you normally pay for funny?  $50?  $25?  $10?  How does “free” sound to you?  That’s right, for the low, low cost of absolutely nothing you can go to your world wide webs and find two seasons of funny and awkward for absolutely nothing.  Go to the link below and laugh.

“Now, Darwin,” you say, “I like comedy but I prefer it in podcast form”.  Okay, well he’s got that covered too in the form of “Phone Hugs & Therapy”. 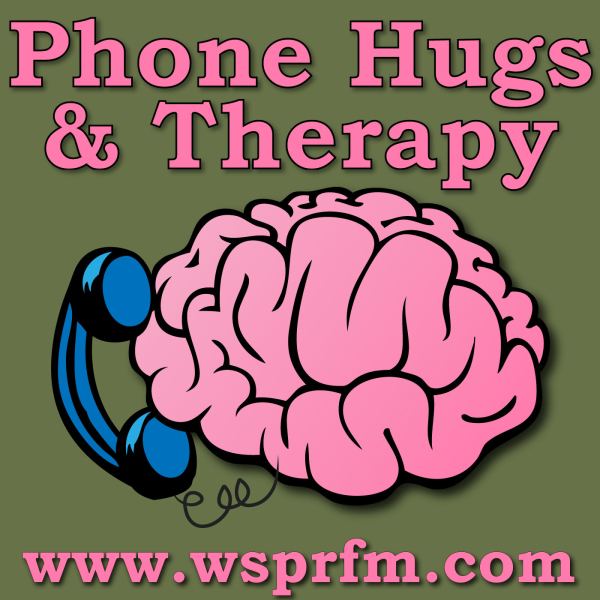 Their website, listed below, lists O’Connor as being the “director, editor and comedic genius”.  It’s not far from the truth.  The show is a semi-improvisational radio program with a real therapist taking on fictional characters.  Listen closely and, trust me, you’ll figure out who they are.  The humor is there and, despite the fact that the advice is real, they don’t use the problems for the jokes as much as they find the funny with the actual characters and interactions themselves.  And again, much like “664”, the humor is FREE!

Now, I know that O’Connor is not doing this all on his own.  He’s surrounded by a ton of equally talent people who help make the end products so remarkable.  However, at the center of all of these touching, badass, hilarious creations is the man, the myth, the legend that is George O’Connor.  He is a modern Renaissance man and, if my predictions are correct, the one day master of all media that we know.

My name is Darwin Law.  I write for the Nerdery Public and I wholeheartedly endorse all of the above listed products and encourage their regular use.

PS: And as a total side note, the man gives a mean hug.