Writer: Tyler James
Artist: Cesar Feliciano
Colors: Guillermo Ucha
Cover: C.P. Wilson III
Cover Colorist: Ty Tyner
Released By: ComixTribe
Where to find this book: December 19th, 2012 at your local comic shop. If they don’t have it slap the monkey behind the counter around for a bit and shove a Diamond catalog in his face.

“I’m never gonna get to kill the Justice League.”

Words right from Tyler James himself and, as far as I’m concerned, it’s a crying shame. I’d let him kill the Justice League, The Avengers and The Partridge Family if it came across half as well as “The Red Ten”.

Now, I’m gonna be up front about a couple of things. I got my hands on this book, as well as the second issue, earlier this year at the Boston Comic Book Convention so I’ve had a while to soak it in and mull it over. There are very few differences between the con version and the newsstand version that you’re going to go out and buy.

The second point I’m gonna come clean on early is that there are going to be spoilers below. So if you want to just take my word for it that you NEED to buy this book and don’t want to know anything else then stop reading……………NOW!

James doesn’t hide that this ‘super hero murder mystery in ten parts’ owes an integral part of its DNA to Agatha Christie’s “And Then There Were None”. When you read it, though, you will find there are several other subtle flavors just below the surface. You pick up hints of Edward Gorey’s “Ghastlycrumb Tinies”, the 1976 film “Murder By Death”, the modern vein of survival/horror films and, yes, even “The Watchmen”.

Please realize that I’m not kissing ass here. “The Red Ten” is not the deconstructed meditation on the comic book genre that many consider Moore’s miniseries to be. No, “The Red Ten” is a super hero snuff flick and a nasty little joy to read.

A big part of this comes from the team of Cesar Feliciano (art) and Guillermo Ucha (colors).  At their most beautiful they have the detailed beauty of Darick Robertson on a roll. At their lowest they echo Timothy Truman and Sam Glanzman’s ‘less is more’ style from “Jonah Hex: Two Gun Mojo”. Either more than passes muster but at the same time this disparity in styles can give the reader a slight hiccup. That is my one minor criticism about the book. Character wise there isn’t a lot to see in the first offering. Yeah, Orion is quite obviously Green Lantern. Bellona is obviously Wonder Woman. Crimson is Nightwing, and so on and so forth. James is painting with broad strokes in this first offering but it’s of no real consequence as they aren’t really the stars of the show here.

The star of the show is our villain, Oxymoron. Well, that is to say, his poetry is. That’s what really sets the tone for what will follow in the next nine issues.

“Ten little heroes with reputations divine; One caught a virus and then there were nine.”

We find this morbid little poem carved into a ceiling quite literally dripping with blood. It goes on with a countdown of each “little hero” and nods to how they’re going to exit our story. And, sure enough, as the first issue comes to a close we get to see our first “little hero” (and possibly the rest of The Alliance) bite the big one.

It’s this sense of impending disaster where James really draws you in. From the low level discomfort of Crimson rejoining the team to hunt down his former boss, Red, to quite literally watching the first hero melt down while decrying that they are all guilty.

It’s this last scene that gives a wonderful nod to what will come with “The Red Ten”. These are not the JLA analogs that you were expecting. These are flawed characters, a point that James plays with expertly in a cork board style spread after the main tale.  We get to see the dirty little secret hiding behind the fallen hero as if we’re looking into Oxymoron’s motivations.

Things will only serve to get more brutal from here and I’m saying that with the beating/murder that opened this book well in mind. It’s going to get a lot worse for “The Alliance” and you’re going to be horrified and disgusted and creeped out and heartbroken and, at the end of the story, you’re going to thank James, Feliciano & Ucha for what they’ve done to these very familiar characters. 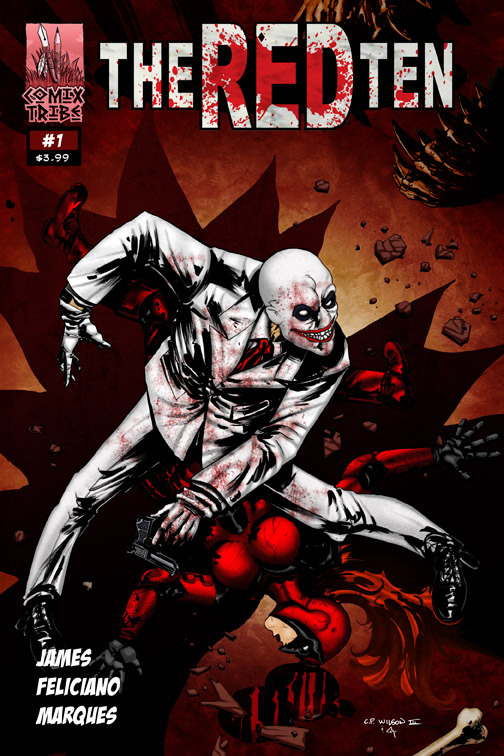