Let’s be honest here, the Mystery Inc. gang really don’t need John Cena as a member. If Hot Dog Water didn’t cut it, then the Doctor of Thuganomics won’t either. Now that WrestleMania has been and gone again, what went on behind the scenes that we missed? Well, apparently they all teamed up and solved the Mystery of the Ghastly Ghost Bear… 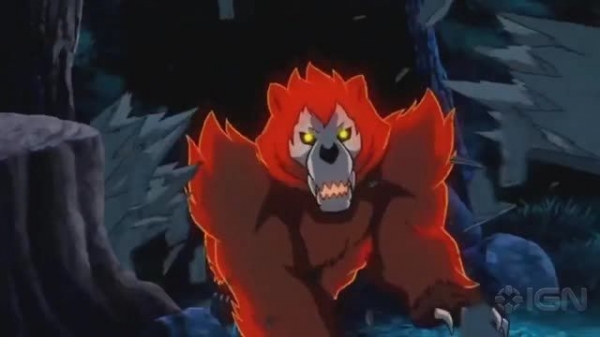 It’s almost WrestleMania weekend in WWE City and The Miz is out jogging. After a run-in with a moody Kane – who’s recently been stripped of the WWE title – The Miz gets attacked by a giant bear-thing. After an opening credits sequence where dozens of Mystery Machines crash into each other and explode for no reason, we find Scooby and Shaggy playing the latest wrestling game. It’s some sort of Move motion sensor game where you have to beat up your opponent in real life to win. Hmm, so much for not trying this at home. After beating the hardest level, they unlock a message from WWE boss Vince McMahon telling them they’ve won a prize and they’re going to WrestleMania.

Scooby and Shaggy guilt-trip Fred, Velma and a highly-reluctant Daphne into going with them. To avoid a raccoon in the road they promptly crash the Mystery Machine into a ditch. It’s okay though because John Cena’s on hand to pull the gang’s van out and lead them to town. The wrestlers (sorry, superstars) are doing their thing in the ring, and after the Ghost Bear trashes Sin Cara’s hot rod our crew of heroes are hired by McMahon to leap into action. But who’s behind the Ghost Bear? Is it the weird anti-WWE guy who owns the raccoon? Kane, taking his Big Red Monster routine too far? Nasty executive Ms. Richards? And what does it have to do with the WWE championship belt, subliminal messaging, an electro-magnetic pulse and WrestleMania? Uh… sometimes it’s best not to ask.

Oh, and just in case you were wondering, Scooby and Shaggy get put in a Last Man Standing match against Kane for the WWE title. Yeah… it’s like that. If you thought David Arquette being WCW champion was embarrassing, the outcome to this will make you weep. 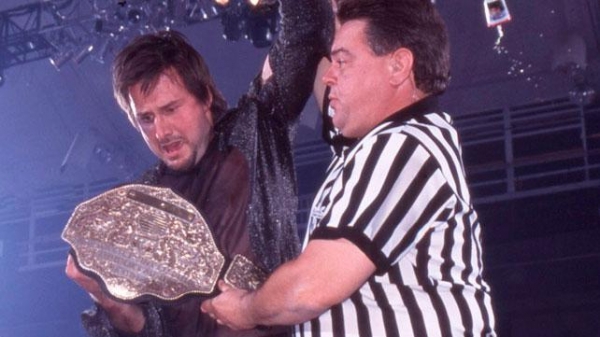 There are some good points, like the wrestlers providing their own voices. They have their entrance themes too, and the animation allows them to be recognisable to the fans. The mystery isn’t a bad one and Fred’s Steel Cage Match trap is a great use of their environment. The wrestling moves are (for the most part) accurate and Sin Cara gets some great moments to shine.

There are some moments that are a little awkward, like Daphne repeatedly throwing herself at John Cena or seeing Shaggy in a unitard.

And then there are times when it’s just bad. The WWE logo is almost constantly on the screen. If you were to play a drinking game where you downed a shot every time you see their logo or hear the brand name, you’d be drunk within 15 minutes. The strength of the wrestlers, in particular Cena, is practically superhuman. He even saves lives while unconscious, his body serving as the world’s most hydrodynamic jet-ski. I’m not kidding. Mystery Inc. are almost pointless and Fred, Daphne and Velma seem to do very little. Also, for some odd reason, Daphne doesn’t quite look right. 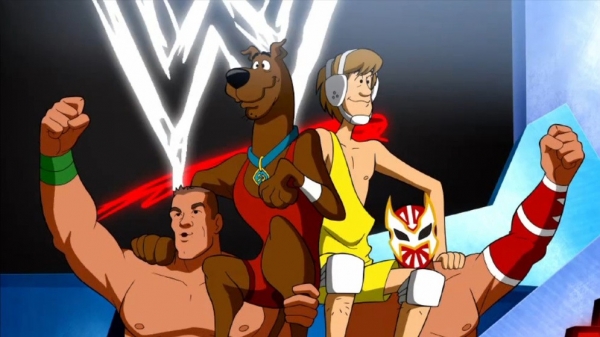 While the theory behind this was that it would appeal to fans of both wrestling and Scooby-Doo, instead it doesn’t show either in a great light. WWE comes across as an overly-commercial product while our gang of sleuths seem to be clueless. While they show the signature moves of the wrestlers,they don’t show the signature moves of Mystery Inc. There’s very little in the way of lost glasses, jinkies, zoinks and trap-building.

It’s hard to know what to make of this. Maybe it’ll appeal more to very little kids instead of an adult fan of both franchises like me. Maybe it’s like when Mystery Inc. teamed up with Batman and Robin, and you just need to switch your brain off to enjoy it. Maybe like those Batman and Robin episodes it’ll become a bit of a pop-culture oddity, a rarity that you’ll want on your DVD shelf even if it makes you cringe to watch it. Maybe it just took me by surprise and it’s not as disappointing as I thought.

And maybe Scooby and Shaggy really are the WWE champions. But I doubt it.