Review: Joshua Black and The Hierarchy of Christ #1

Review: Joshua Black and The Hierarchy of Christ #1

Written & Created By:​​ Martin Dunn
Penciled By:​​​ Roberto Duque & Larry Jarrell
Inked By:​​​ Larry Jarrell & Roberto Torres
Colored By:​​​ Jeremy Calderon
Lettered By: Martin Dunn
Co-Scripted By: Shawn Talley
Released By:​​​ Con Artist Entertainment & What The Flux Comics
Where to find this book: ​You can go to a variety of places on the web to get more information. Those places include: www.conartistentertainment.com, www.twitter.com/conartistcomics, www.facebook.com/conartistentertainment & www.JoshuaBlackComic.com. 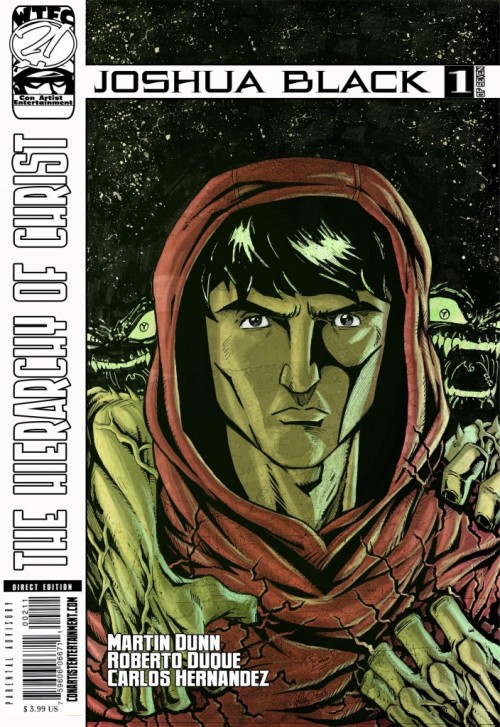 Have you ever been kicked while you were down? Ever taken a beating when you were already feeling raw from the general indignities of life? Joshua Black has but he’s got something that you don’t have – A connection to the Divine…even though he doesn’t really know it. Yet.

I’m gonna start with the spoilers before we get into the review just so we can set the stage for you. Fair? I hope so because that’s what I’m doing.

When it comes to the stick Joshua got the end that seems to drip with excrement. Mom’s dead, dad’s an abusive drunk and he’s got a massive target on his back with the captain of the douchebag squad taking aim as often as possible. If that isn’t bad enough, his best friend is an Anthrax fan. (I kid. I love Anthrax…seriously.)

That being said, it’s also where Dunn has some fun with the audience by letting us in on the inside information long before the Joshua has a clue what’s going on. He sets the whole thing up with a quick touch on the crucifixion of Jesus and then transitions right into Joshua’s modern day plight. That transition doesn’t come without a touch of fear though.

You see this is not just the story of a teenager getting his hat handed to him on a daily basis. There’s a more sinister undertone to this recipient of abuse. Dunn and company give it right to us on page 2.

“This is the story of how he ended the world.  Not with a whimper…but with a bang!”

It’s a fantastic bit of storytelling when you stop to think about it. “We’re going to give you this character who you’re going to feel a good deal of sympathy for but don’t forget that he’s going to be behind the end of the world.” Now you’re left with more than a fair share of inner conflict. Do you want to see him succeed when success might mean the end of the world? That’s a question that you alone have to answer.

Spoilers completed. Now let me tell you what I think of the package as a whole.

Dunn does a good job of setting the scene for us. The dialog feels organic with fairly strong character voices that mark them all as their own people. I would have liked to have learned a bit more about Tracy, Joshua’s love interest, but I have a feeling that this is coming down the pike. That being said, you have known or seen these people at some point in your life but they still manage to avoid playing to a cliché.

Even without getting my hands on a colored issue, I can easily see the nuance that they are going with. The art fits well with the book despite the slight hiccup in artistic teams towards the end. But really, the small things are the ones that grab me and make it a more enjoyable read. The bruise on Joshua’s cheek, the stoic look on a Roman soldier’s face in a reflection only we can see, Tracy’s eyelashes – it’s the little stuff that I found really engaging and made me want to see more.

In the end, whether Joshua truly does end the world with a bang or finds a way to embrace his Divine connection I cannot say but based on this offering I will be tuning in to the next installment to find out where Dunn and company are going.