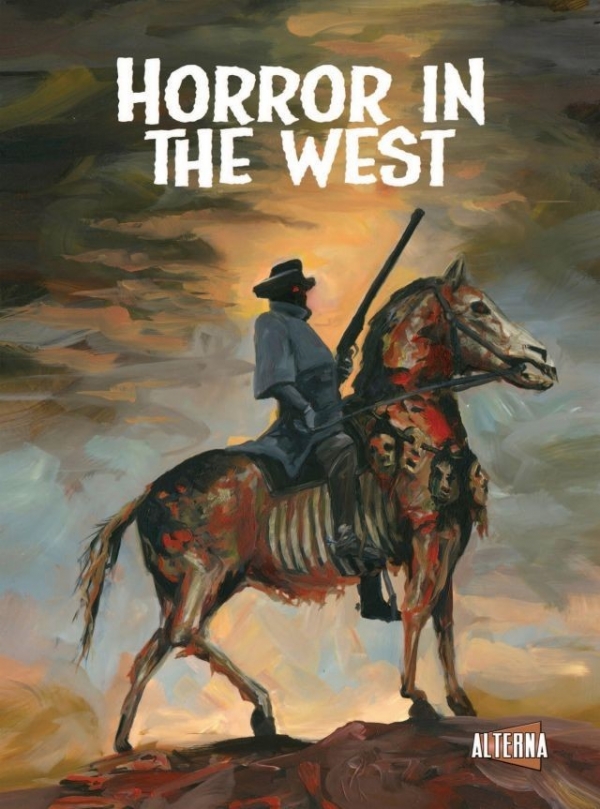 It makes sense that, at the tail end of this book, there’s a plug for “FUBAR volume II: Empire of the Rising Dead” as it features a few of the creators from that series.  The connection, however, runs deeper than that.  “Horror In The West” feels like a kissin’ cousin to the World War II zombie anthology for it’s creepy spin on historical fiction.

One of the things that struck me after I finished the main body of work was to read the back jacket and see that it was only eleven stories.  This felt surprising and I had to go back and double check to make sure this was correct as it felt like a much more filling meal than just eleven shorts.  Point of fact, it felt jam packed with such a wonderful breadth of stories that made the hair on the back of my neck tingle.

Take for example Sam Argo’s alien “Star Calf” tale which felt like it had been pulled from vintage era Stephen King’s “Creep Show” with art that recalled the heady 70’s Marvel bullpen.  It starts weird and gets goddamn sinister before the curtain is pulled.

Or if aliens ain’t yer cup o’ tea you can go with Dan Simon’s campfire-esque ghost story, “Lawson”.  With a hazy backdrop you follow a ne’er-do-well as he is seemingly stalked by the ghost of a man he killed to a somewhat unexpected end.

Or how about a short and sweet weird tale with the Phil McClorey/Antonio Brandao entry, “Captured In A Flash”.  This one is the perfect length and blast of WTF with an “injun” killing bounty hunter who meets an unexpected and violent end at the hands of a newspaper.

Whatever your taste is, from creepy to western, you’ll find something to sink your teeth into and savor here.  Demons, cannibals, aliens, lizard men and so on all have a home under this anthology’s banner.

Now, to be fair, there are one or two clunkers but they pale in comparison to the high marks that most of the stories hit.  My only real complaint about the book is that a couple of the stories were too brief and begged for expansion.

“The Amulet” by Fred Kennedy and Andre Fernandes ends with a caption promising that the story is “to be continued” which was heart breaking as Kennedy’s story only wets the pallet for his main character and I could never turn away another helping of the creepy ghost-like art of Fernandes.

I can only hope that with a few of the stories ending with cliffhangers that this is McClorey and AlternaComics way of saying that there is more to come.  If that’s the case then saddle up boys and girls because you need to be headin’ out west.