Language is fascinating. What we say, how we say it and, sometimes, what we do and how we do it. From the spoken word to the written word to the signed word. Language is everywhere. It is what, ultimately, differentiates us from animals. The ability to use complex systems to communicate – amazing, right? Not only the ability to use language, but to UNDERSTAND the language, is just mind boggling – if you sit and think about it.

Sometimes, I sit and think about it. Shuddup. I was married to a PhD in Rhetoric and Composition. We sat and thought about shit, a lot.

What I never thought about was what would happen if the understanding of language – this thing that is all around us all of the time – was bad; infected? How would you know it without using even more language to communicate it? How would you cure it? Would the written word become the only means of communication? Would we all have to learn sign language? (Which we should do anyway because it’s beautiful). The idea that we – I – could lose the ability to communicate with others, with loved ones, is appalling. It is horrific. Couple that with a virus, spread aurally, of an infection that creates zombies who are momentarily aware of what they are going through and holy shit balls… 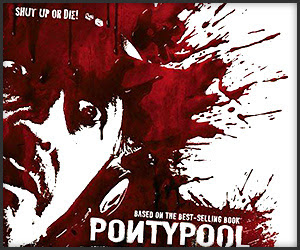 Pontypool is a brilliant, independent, Canadian, zombie* film from 2009 that literally turns the genre sideways. Trapped inside a tiny radio station, former shock-jock Grant, his producer Sydney, and their assistant Laurel-Ann, learn that a virus is spreading through their small village of Pontypool – via language. As the station employees attempt to remain safe, brief transmissions become the only way to gather information – running the risk of spreading the infection further. If the understanding of certain words is infecting certain people, how can you cure the virus without potentially spreading it further?

This film’s impact rests almost squarely on Steve McHattie’s (Grant) shoulders, as he is our avatar throughout the movie. From the first moment on screen when he becomes unsettled by a random woman’s gibberish in the snow-white road, to the moment he figures out how to dismantle the understanding of a word and reverse the effects of the auditory virus, we are Grant. Throughout the film we learn what is happening only when Grant learns it, keeping us completely in the dark and inviting us into the claustrophobic studio with him and his peers. This enclosure – from the outside and from the information – keeps the movie intense, and creepy, from beginning to end. 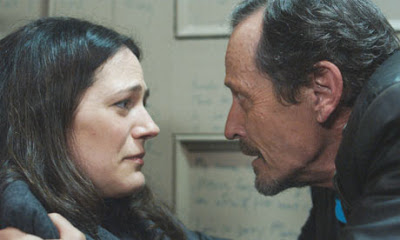 Pontypool is wickedly intelligent but doesn’t lord that over the audience. The explanation of the infection is easy to understand – you do not have to be a linguist to get it – and the simplicity of the cure is absolutely plausible. The lack of infected hordes, and buckets of gore, keep you feeling locked in – creating a false sense of security against a backdrop of ever increasing horrors being heard via transmission.

I think of Pontypool as an allegory about how little we consider language. Which is a damn shame, because words have power. We should treat them with a little fucking respect. And, in the age of the internet, it’s even more horrifying how quickly we toss out words without a second thought. Each time I see this movie, I see or hear something new – something more unsettling than before – and I go silent for a while.

Language is no longer regarded as peripheral to our grasp of the world we live in, but as central to it. Words are not mere vocal labels or communicational adjuncts superimposed upon an already given order of things. They are collective products of social interaction, essential instruments through which human beings constitute and articulate their world. This typically twentieth-century view of language has profoundly influenced developments throughout the whole range of human sciences. It is particularly marked in linguistics, philosophy, psychology, sociology and anthropology. ~ Ferdinand De Saussure, Linguist

As you begin to piece together what Pontypool is doing, you become frightened for another reason, entirely. If language COULD be infected, should you be talking? Should you be watching? Should you be listening? Should you be writing a review encouraging people to partake in the excellence that is this low-budget masterpiece? Well, yeah. Because if the people do their due diligence they’ll be okay.

Zombie Honey Rating: 5 redefinition of words out of 5

*I use the term “zombie” here loosely. It is never explicitly stated that the infected become undead or that they crave human brains – only that they become violent towards other people. We apply what we know, from language, to these infected and call them zombies because of our definition of zombie. Yes, another way this movie twists our understanding and use of language. Dammit.