FINAL PROMPT (4)
What do you think is the ideal venue for Wonder Woman to break out and make a bigger impact?  Is it time for a film?  A TV series?  Solo, or as part of the Justice League?

JESSICA: I think film is the perfect outlet. Television is also perfect, just look what Smallville did for Supes. But, you know what’s even better? READING THE COMIC! *throws down the gauntlet* Next QUESTION!

RICK: Oh, please no more “Dawson’s Creek with superpowers” shows! Get her out there fighting crime, not mooning about like Clark Kent after Lana.

JESSICA: No matter what, I do think the comics need to create a stronger personal character for readers and eventually film viewers to relate to. Even with the relationships forming in the New 52 and her Olympus family, she needs personal quirks that can continuously be picked up on and expanded upon. It’s these little inside jokes and recognitions that make a character endearing and loved. Her warrior status is taking her to new levels, but not necessarily loved. 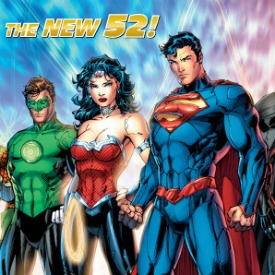 RICK: Yeah, if you can focus on what works in the comics and put that on the screen, it’ll work. That’s been the key to Marvel’s recent successes. Introducing her in a Justice League film would be easiest, because if it’s successful then every character gets a spinoff film, like Avengers in reverse.

SAM: Ideally she’d make a cameo first. Show up and be awesome for a minute or so in something like Man of Steel. Generate buzz for the character, then have her go missing from the next movie. This would help to generate demand from an audience that had already been teased her. Then make her movie, declare that it was set before the events in whatever movie she made her cameo in. Then make one final project with yet another cameo before Justice League.

RICK: That could work too. Tease it, again like the Marvel movies. I’m just worried about the portrayal though, because a Batman Begins story for her would be too dull and a Green Lantern-style film would be shallow. Strangely, I believe they should look at the animated film as a template for a live-action production. It worked on every level, as both origin story and action movie, without a hitch. It had all those little beats and quirks that you were talking about, Jess.

JESSICA: It’s Jessica or Jessie. I really do hate and despise being called Jess.

SAM: While I’d love another WW tv show, the last proposed series was a disaster and many people know that. The credibility of a television show is at a low at the moment, thus I believe the above planned suggestion would be the best. Man of Steel (Cameo One), GL 2 (hey, it could happen. Ghost Rider got a sequel), Wonder Woman movie (set before the previous two movies, tie in at the end), Flash (final cameo most of team uniting).  On a side note, Batman SHOULD NOT have another movie until after Justice League. We need the world time to recover….. errrr….. get over the loss of Nolan.

RICK: I never lost Nolan, I keep him in my back pocket at all times! So who’s up for pizza and beer? This bottle of tequila has seen better days…

JESSICA: FLAG ON THE PLAY! Foul for mentioning Nolan and previous Batman movie series in a Wonder Woman based article with no sufficient reason. Penalty: Automatic loss of battle!