AUTHORS NOTE: This story, while only retold a year ago, is actually 5 years old. So are the photos. I was far less Blitzy then… Be kind.

Dragon*Con. Nerdgasms abound for the incredibly geeky – between geek interest panels, star studded talks, toys, games, costumes, boobs and a walk of fame that can sometimes make a geek girl weak in the knees. More specifically, this geek girl. But alas, this story isn’t about Dragon*Con; it’s about one specific moment at Dragon*Con: When I met Malcolm McDowell.

Or, really, when I hugged Kane Hodder.

Since I can remember I’ve been exposed to media (movies, tv, music), that wasn’t entirely age appropriate. No fucking surprise there, right? One of the movies that caught my attention at a very young age was Cat People. Not the original 1942 film – though that one is pretty good. No, the 1982 film starring the young and plucky and deviously handsome Mr. Malcolm McDowell. If you’ve read ANY of my Blitzholm Syndrome articles, you know I have an unwavering love of all things devious – and Malcolm McDowell surely fits the bill with most of his characters. 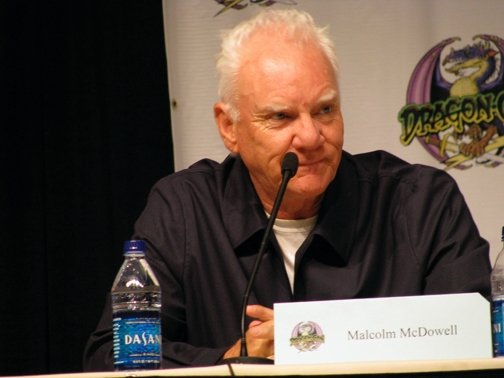 All that aside, I’m a big fan of Malcolm’s and he was going to be at Dragon*Con and so was I! Needless to say, I was excited. The Doktor and I scouted out the “walk of fame” ahead of time so we knew exactly where he was going to be and what line to stand in so I could come face to face with this icon. The next day we packed up our cartoon Clockwork Orange poster and headed to the convention. First up: a Q&A panel with Malcolm. Second: my autograph!

The Q&A was exactly as you’d expect. Lots of questions about Clockwork Orange, plenty of eye rolling and dismissive answers, the occasional excellent question about his other films and a few stories that were both entertaining and insightful. I’m not one to get excited about being in the same room as a celebrity, but I was pretty excited about MEETING this one. The panel let out and we had plenty of time to find our way back to the “walk of fame” and get in line to meet the man. As we stood, waiting patiently… (okay, The Doktor was patient – I was antsy and ready to throw myself at this white haired celebrity)… I took note of the people around Malcolm’s table; James Marsters, Doug Bradley and Kane Hodder.

Take this journey with me people: Spike, Pinhead and Jason Fucking Voorhees!

I gleefully pointed this out to The Doktor, clapped my hands like a school girl, and danced in place at my own excitement. I would come back for these people (especially Doug – since he wasn’t at his table yet). The line moved forward and we were greeted by assistants asking for our money, which we happily shoved into their hands. I noticed on the table (amongst MANY Clockwork Orange items) a small stack of Cat People posters. WHAT?! I love that movie. I’ll buy that. So, I did. We moved up in line. The Doktor met the man first. Shook hands, chatted about the ridiculously cute poster we brought for him to sign and then moved on. 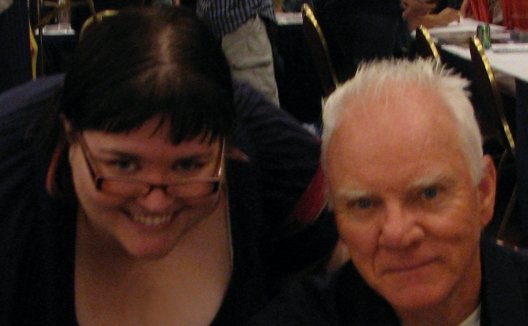 I stepped up, stood in front of him and put my poster down for his autograph. “Hello, dear.”

“Hi!”
He held up the poster and pondered it for a moment. “This is one of my favorite movies.”
“Oh, yes? Mine too. I may have seen it at too young an age, but it’s still a favorite of mine.”

Now, let me take a moment here and say; yes, I was wearing a shirt with a “designer” hole cut out at the cleavage.

I gathered my items and handed them to the Doktor along with the camera and sidled behind the table where Malcolm was sitting. I had expected him to stand, but he did not. I have a bad knee so I couldn’t squat. Instead, I bent over. You would think, at this time, the Doktor would say, “you’re all tits, fix that”, but he did not. He snapped the photo. I shook Malcolm’s hand and thanked him. And that was that. The end of my epic meeting with this actor I’ve been watching since I was young. It wasn’t anti-climatic, it wasn’t good or bad. It just was. 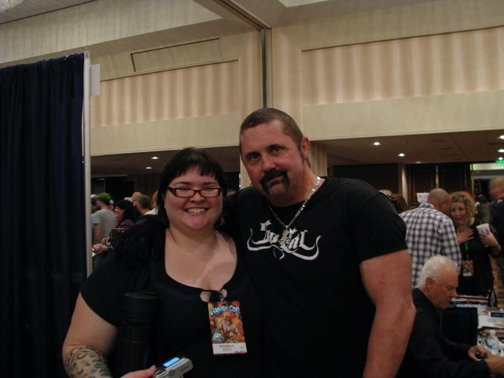 As we stepped away from Malcolm’s table and begin to roll our posters up and put them away, we hear a voice. A deep voice. A kind voice. “What? He’s too fucking good to stand up for his fans?” We turn around and Kane Hodder is standing right behind us. Almost looming. Because, really, that man is BIG! I shrugged. “It’s okay, I was just happy to get the autograph for Cat People.”

You see, our friend poopbird had already been over to talk with Kane and get his autograph, and they were waiting for our camera to take a photo of the two of them. While they were waiting, they were watching our interaction with Malcolm. I took the camera from the Doktor and snapped a photo of Kane and poopbird. As we all said thank you and shook his hand, he held on to mine an extra second longer and said “You want a photo? Come on. I’m standing for you, already!” Who was I to argue with this logic. Also – JASON VOORHEES! “Yeah, man, that’d be awesome!” I stood next to him and wrapped my arm behind his back and his arm behind mine, as we stood waiting for the Doktor to work the camera, Kane told me this: “I’ve been watching that guy all day. He hasn’t stood up once for his fans. Doesn’t he know he’s here because of them. What an ass.” I couldn’t help but smile. The camera snapped and Kane turned and gave me a GIANT hug. KANE HODDER HUGGED ME… unsolicited, and IT. WAS. EPIC!

Turns out, meeting Malcolm McDowell was only as awesome as the hug provided by Kane Hodder, and really, I’m okay with that. 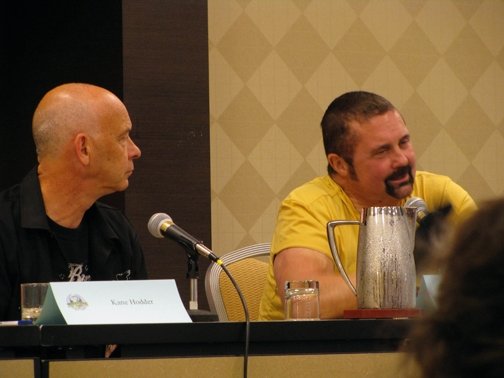 **Interesting side story: later during the convention the Doktor and I would attend a panel with Kane Hodder and Doug Bradley about horror movies. There was no moderator and few people were in the room, so it was more a conversation between the two of them and all of us. Moments like these are what really make cons worth it for me. 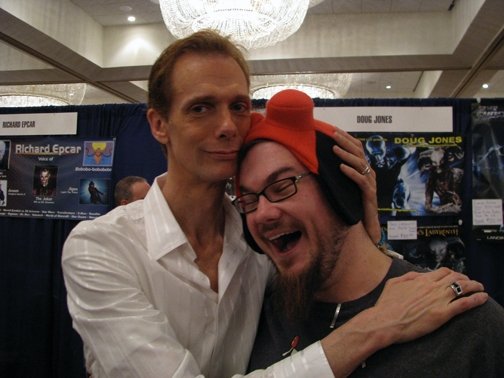 *** EVEN MORE INTERESTING SIDE STORY: This was the first year we met and were gleefully hugged by Doug Jones. The above happened and it was good for everyone.