Anyone who knows me knows I really dig the Monster In My Pants.

It’s a fun song from the B-52s’ own Fred Schneider, a whole lot of boogie in a weird little trippy bundle and I dig it to bits. It’s the sort of song that I can jiggle my buttocks to as I heat up some soup, with a catchy hook that’s hard to resist. Also it’s completely silly and cheesier than a fondue made in an edam pot. It’s the same reason why I like monster movies. The good ones, the bad ones, the ones so bad they’re good again, and the ones with giant rocket-thruster powered spinning flying turtles.

I want another Pacific Rim and I want another Godzilla. More than that, I want to see them together, and with a healthy dose of King Ghidorah thrown in. I’m probably one of the few nutcases who still hopes there’s going to be a Cloverfield sequel. I couldn’t care about that lousy Sci-Twi-Light film The Host; for me The Host is the South Korean film with the fish-monster. Also, when they get the next Godzilla film going I’m hoping to actually see the title character, and he’d damn well better be the star. 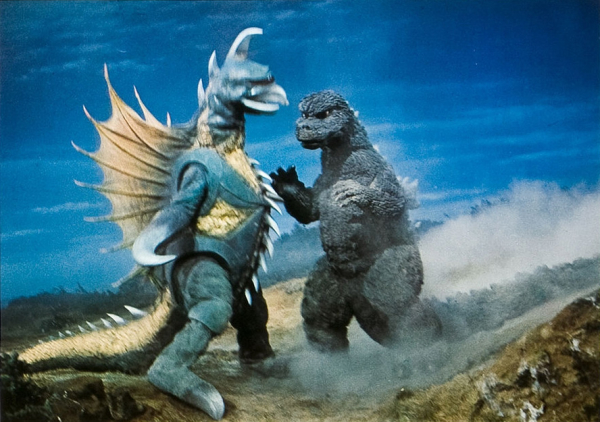 I’m not saying that Godzilla was bad, just that it should have had a bit more Godzilla in it and a whole lot more fun. In Godzilla vs. Megalon there’s an awesome fight scene where Megalon and Gigan double-team Jet Jaguar like jocks in a bar parking lot, before Godzilla enters the fray turning it into a proper tag-team wrestling match. The fight is in broad daylight and lasts over twenty minutes. It may look ridiculous, Godzilla’s flying super-kick is hilariously bad and there’s little intellectual benefit to any of it, but… well, dammit, it’s just so much fun!

I was watching Mega Shark Versus Giant Octopus earlier. I don’t mind admitting that, nor do I mind admitting that I actually paid real money to own a copy. It wasn’t much money, sure, but then this isn’t exactly Jurassic Park. When the two top-billed stars are Debbie Gibson and Lorenzo Lamas, you know you’re in for a petrol station bargain-bin classic. Gallingly, Lamas wasn’t even the main male character. Instead that honour should go to Vic Chao, and while he’s no Ken Watanabe saying “Let them fight!” he was pretty good in it. 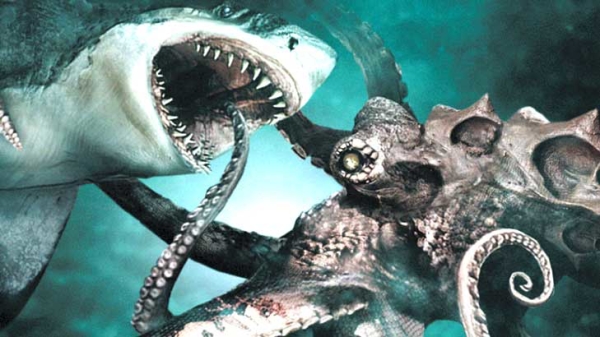 Also, he was a nerd. And he got the girl. So while Lorenzo Lamas’s character is an offensive, racist, sexist bigoted government guy who’s a maverick because his ponytail isn’t regulation military style and he doesn’t wear a uniform, it’s the nice nerdy guy with the glasses who helps save the day and gets an ’80s pop music icon girlfriend. He gets to have her in the supply closet, in case you were wondering, and it’s hinted he’ll have her again after the end credits. But that’s just the 80 minutes of human fluff that dominates the film, because just like the last Godzilla movie the monsters are absent for the most part.

When they do, they live up to their names. The Mega Shark (a megalodon, technically) is a whopper that can laughingly eat the Golden Gate bridge and a flying jumbo jet. Sadly, the low budget only allows us a brief glimpse of those highlights. The giant octopus destroys an oil rig, although all we really see are a few seconds of tentacles. Their big fight is an awful display, with the same five and ten-second shots of their attacks repeated over and over again, sometimes just with the image reversed to make things different.

But then, that’s no different from Michael Bay re-using Transformers footage again and again. Thankfully this film is only 88 minutes long, not one of those two-and-a-half hour yawnfests. 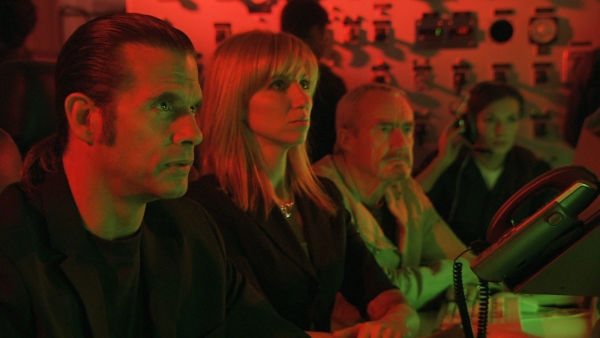 Yes, it’s an awful film… but you know that even without seeing it! The acting isn’t very good, but when you’ve got a weak script there isn’t an actor alive who could make it work. Some of the minor characters on screen are so poorly acted that they have to rely on smart editing to raise the tension. Since they don’t have smart editing either, it just looks even sillier. Even the end theme song is a disaster. As for the whole film, I didn’t mind it a bit… even though I know it’s weaker than alcohol-free beer.

It’s silly. It’s fun. It’s the Monster In My Pants song. It’s a true lousy cult film in a time when many mistakenly think that any popular TV show or movie is “cult”. It’s that something which is rotten in the state of Denmark. It’s what monster movies are, even if they paint themselves up as being serious. It’s the cinematic equivalent of cheese whiz. It’s everything that should be wrong, and yet I like it.