They never make a happy movie shrouded in gray and blue, do they?

That’s okay though – zombie movies aren’t really meant to be happy. Especially zombie movies that focus on the individual relationships between infected and non-infected. And that is, ultimately, what Maggie is about. 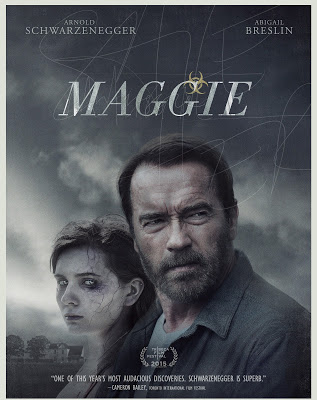 Maggie tangentially tells the story about a zombie infection spread via agriculture and destroying a community. Primarily, though, it’s the final act of a father and daughter’s relationship. Seemingly, in an effort to protect her father, Wade, and his new family, Maggie heads to the city. After weeks without contact, Wade begins to track her down. He finds her in a special hospital for the infected and has her released into his care – with fair warning of her impending condition – decreased appetite, increased decomposition, heightened sense of smell, craving for human flesh. But, Wade doesn’t care, he just wants his daughter back – even if only for a couple of weeks.

This is how the movie starts.

What comes after is a series of events to make you feel normal while never letting you forget that there is this horrible thing happening. In Maggie the zombie infection is slow progressing, taking up to 8 weeks for full-blown zombification requiring the infected to be “quarantined.” In that time you get to live with Wade and Maggie. You take their drive with them, sitting in uncomfortable silence; smile when they play Maggie’s song; and genuinely get upset when Wade has to fend off a zombie at a gas station. Maggie desperately wants things to be normal, Wade even leaves money on the counter for gas. 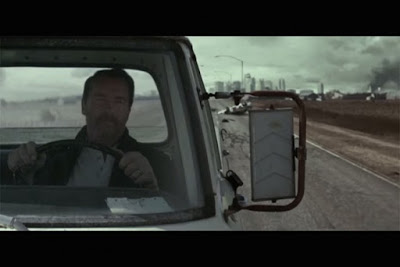 In between the normalcy is the decay – almost literally – as Maggie’s infection begins to progress. She withdraws from her friends, her eyes turn cloudy, Wade’s wife leaves, Maggie’s limbs rot, the cops come to take her to quarantine. And, all the while, Wade continues to chop wood, trap foxes, and reminisce with Maggie about her mother. The rottenness of the situation creeps in just like the zombies do. Nothing has a true sense of urgency, and THAT is unsettling. How do you deal with living your life, day-to-day, knowing you’re going to die; knowing you may have to kill your daughter? That’s fucking horrifying, guys.

Maggie’s horror is not in your face, it’s in the peripheral. Always. 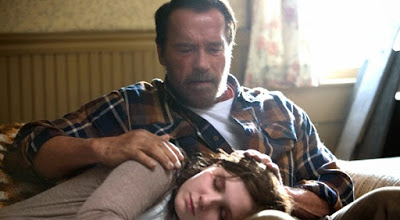 Now, if you go into this movie expecting the same ol’ Ahhnold, I think you’ll be disappointed – so don’t do that shit. This is a dramatic role for Arnold and I think it’s fantastic. I remember him hunting for his daughter in Commando, so that transferred well for me to Maggie. Arnold’s Wade is the strong, silent type (with disastrously dyed hair). He is a distraught father attempting to give the gift of a normal life to his infected daughter, and mustering the truest strength to say a final goodbye. He’s solemn in the face of disaster, and when he cries, it’s one singular tear at a time. And that is perfect. Abigal Breslin, as Maggie, is pretty grounded – subtly growing as a person, as she slowly turns into a zombie.

I don’t want to ruin the ending for you so, watch it – ok?

Maggie is slow and deliberate, you already know the backstory and you mostly know the ending. There are no surprises or twists. Maggie doesn’t rely on gore or massive zombie attacks to get your heart rate up – although, there is an attempt at a jump scare pretty early on – if you need that type of thing. What Maggie needs is your empathy and sense of family. It needs you to believe that continuing as “normal” after a zombie outbreak would be a possibility. Even if it’s a forced possibility. And that works for me.