July of the Dead was a Zombie Honey segment reviewing back-to-back the original and remade Dead movies. I stopped here with Land of the Dead  – because 1) July was over 2) there were no more og vs. remakes to review 3) I hadn’t seen Diary or Survival of the Dead and 4) after watching them I deemed them absolute shit, and that is my official review.

Land of the Dead Reckoning 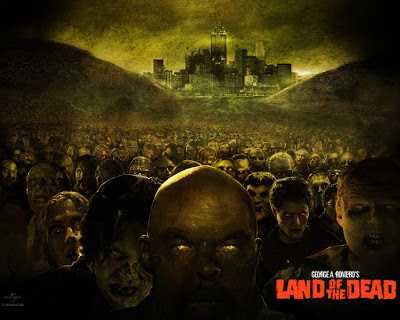 The problem with this? Romero beat you to it. Again. The Elder Gods bless him.

Years after a zombie apocalypse (because it’s Romero, I like to think it’s all the same zombie apocalypse) survivors have made their home the Golden Triangle of Pittsburgh; surrounded on three sides by water and bordered by pseudo-military personnel, electric fences, and zombie hunters where land touches land. The feudal government is run by the richest of the rich who keeps the other riches in close proximity at the ever luxurious Fiddler’s Green. In an effort to make procuring supplies safer, a zombie-destruction vehicle known as Dead Reckoning is, commissioned to break through zombie infested neighborhoods with ease. On one particular trip out of the safe haven, survivors realize that the zombies seem to be having thoughts – despite the city’s best efforts to distract them with fireworks (dubbed “sky flowers,” by the way). The provision scouts make it back to base with supplies, booze, and some news about the zombies seeming ability to be planning… something. 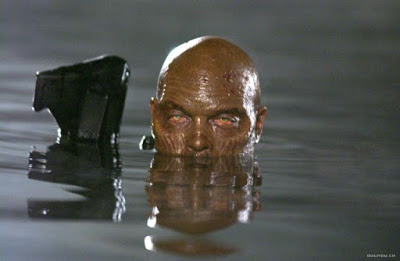 One particular scout has his heart set on moving into Fiddler’s Green and being set up nice and cushy-like amongst the rest of the upper-class survivors; much to the leader’s shagrin. Another survivor just wants to make his own Dead Reckoning so he can finally leave the apartheid. In his attempt to collect his vehicle, he rescues a woman who was sentenced to “death by zombie wrestling” for her participation in a rebellion of the poor. Dissatisfied with the turn of events on both ends, all hell breaks loose as the poor confront the rich and the outcast zombies confront the compound of survivors. Moat be damned.

Day of the Dead is definitely my favorite Dead movie. But Land of the Dead is the one that I can, and will, watch whenever or where ever. It really is ridiculous amounts of fun. Not to mention, we get to see even more of Romero’s smart zombie’s being fleshed out. Ha! Fleshed out. Get it?

In Land of the Dead you finally get to see a well-rounded idea of what life might actually be like in a small community after a zombie apocalypse. Those with power abuse it completely while those without try to fight against it. Provisions must be sought after and fought for. People’s desire to continue surviving breeds innovative weaponry and means of living from one day to the next. This is one of those zombie movies that takes every common sense scoff and reaction from the audience and applies it to the apocalyptic situation. For instance: the idea that you could keep zombies at bay with a body of water; the use of electric fences; the spread out watch posts. Brilliant. Thank goodness! It gets old seeing survivors flail about without any idea of how they should be surviving.

Land of the Dead is also a movie that gets across it’s socio-political statement very clearly without beating you over the head with it and without spelling it out for you and making you feel like an idiot. It’s not just used to drive the plot forward, it’s a massive plot point – and being the classist chick that I am, I absolutely love watching the high-falutin tower dwellers run for their lives. Don’t get me wrong, I’m a fan of Dennis Hopper’s rich and overtly evil dictator – because of course I am – but I still love it when people such as that get their comeuppance.

There isn’t much I dislike about Land of the Dead. In fact, I’m hard-pressed to find something that I can really be grumpy about. Dead Reckoning is an amazing fucking zombie smasher and I want one. I would build one out of a school bus, but I saw Dawn of the Dead (2008) and I know how that turns out. I’m not even angry about the magical mentally handicapped pseudo-savior trope – and I usually am angry about that, but why not this time? Because it’s paired with the equally annoying magical black man trope. Granted, the magical black man in this case is a zombie with the forethought to have thought and breakdown the walls between the living and the dead. But hey, two tropes for the price of one. I’m game.