Let’s Go To The Mall… Today!

Continuing with the theme of July of the Dead I’ve gone ahead and watched both versions of Dawn of the Dead (1978 & 2004). Both of which I enjoy, for completely different reasons, which I will get into. Here again we have film that most people adamantly believe did NOT need a reboot. And, I agree with you. However, I feel like calling Dawn of the Dead (2004) a reimagining is the most appropriate “re” word you can use. Ultimately, they are two different movies that share a title and core plot locale. That’s kinda it. 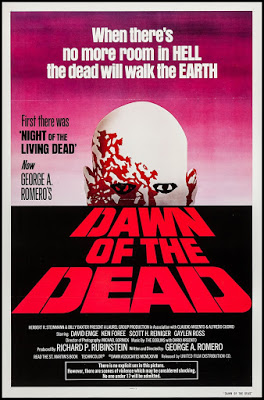 I feel that if you watch the movies back to back – maybe not in rapid succession, but within a day or so of each other – you’ll see that despite some overlapping character tropes and that heavenly location, the movies really don’t mirror each other at all. This actually makes me super happy. Because, if you’re going to “re” a movie that doesn’t need to be “re’d”, you’d better fucking making something different, and just as good.

Now, with all of that being said – lemme holla atchya about the second movie in the The Dead series.

Dawn of the Dead (1978) looks like it might play out entirely in broadcasts and battles of the media vs. the government. The action news sequence that introduced the film’s plot is very… actiony. As the media begins to get shut down and the military takes over the action rises. Although, the military has no better solution for containing the zombie epidemic than the media does, so a couple from each group steal a helicopter and ride off into the wild. The wild of a shopping mall, that is. A shopping mall that is, ultimately, a haven – providing more than ample provisions for all that the survivors need or desire. But alas, things cannot be so good for so long. While securing the mall one of the survivors becomes infected and another reveals she is pregnant. Eventually the good life slips away, not by the rotting hands of the undead, but by the riding-gloved hands of a motorcycle gang – breaking and entering to steal provisions, and letting the undead masses slip inside the sanctuary.

Romero paired up, in part, with Argento for this flick and it shows. Most of this movie seems more like a study in hedonism than a study in surviving zombies. The pacing between acts is appropriate for each segment’s content, but the length of the second act can feel overdrawn – which feels more like Argento than Romero, to me. I love getting back to using news broadcasts to deliver plot; Romero loves him some media turmoil. But, the bulk of the movie seems focused on watching the survivors live it up in the mall. This isn’t always a bad thing, I mean, if you’re going to be one of a few survivors in a place built for your every material desire, there’s definitely a lot to be observed. 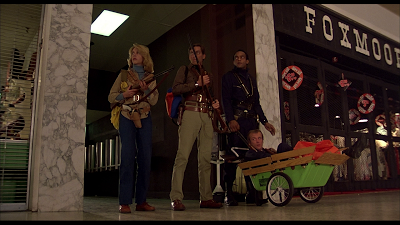 What I appreciate amongst the – at times boring – moments in the mall, is the productive moments. The survivors still have their helicopter and the pilot helps to teach someone else how to fly it should they ever need to escape. Brilliant! So often we see missed opportunities to do anything useful for future survival. When the film decides to turn its attention on what is happening outside of the mall, things get more interesting. Let’s be honest, there is only so much of watching people live the “high life” that can be entertaining. This isn’t Lifestyles of the Rich and Famous. This is fucking Lifestyles of the Could Be Deadless.

Eventually, I think that’s what Romero realizes in the final act when their sanctuary is busted up. It’s a slow burn to get there, but eventually the bitten survivor succumbs to his infection and is shot in the head. Emergency broadcasts provided by the military/government cease – noting the end of civilization as the survivors know it. And, during one of those productive fly lessons a biker gang learns of their whereabouts and storms in to loot and let the zombies in.Dawn of the Dead (1978) is over two hours long. It’s a meaty sammich with a little bit of news/military action and some zombie shenanigans, stuffed to the gills with hedonistic play times.

The best part? The gore! Tom Savini was unavailable to do the effects for Romero in NOTLD but was back to make his bloody debut for DOTD. It makes a Zombie Honey very happy.

26 years later we get a “reimagining” of Dawn of the Dead (2004), Zack Snyder’s feature film debut (and probably his tightest, and best, movie). This DOTD movie starts, continues, and stops with action. THIS feels like a zombie movie from beginning to end- with a brief break for probably the best relationship development in a movie in a very long while. 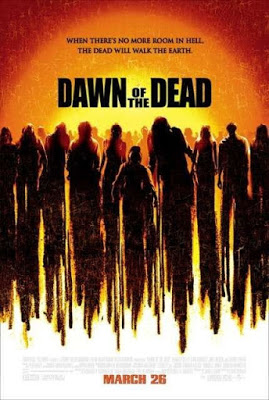 Here, our story begins with a nurse coming off a long shift and making her way home, ignoring the news broadcasts about a bizarre infection spreading in the area. What follows is a speedy action scene of a child-zombie attack, panic, and survival. As Ana, the nurse, is hunted by her now infected husband, she grabs the keys to the car, runs to the bathroom, and escapes out the window. Driving to, somewhere, anywhere, she crashes her car and is awoken with a shotgun in her face attached to Kenneth (Ving Rhames). This duo meets up with three other survivors wandering away from what was supposed to be a safe place and headed for – you guessed it – the mall. They are met by three additional survivors: guards with authority complexes. After a brief back and forth struggle for power they clean up the mall and get their act together. Only to be interrupted by a truckful of survivors, some of whom are not long for the surviving. Eventually coming to the realization that they cannot live in a mall forever, they modify some busses for optimum zombie destroying and head towards the coast to escape the mainland via boat.

Holy hell – just typing that out made me realize how much happens in Dawn of the Dead(2004) and now I’m fucking exhausted. There are so many intricate little plot points that while you’re watching it it pieces together nicely, but giving a brief synopsis is clearly not an easy task. But I feel good about it because talking about it gets your heart rate up. Or it could be all the tapping on my keyboard. Either way. I dig it. 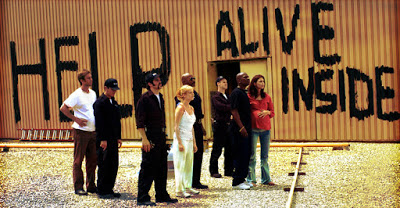 This reimagined DOTD truly does not resemble the original at all, but it’s equally as good – if for completely different reasons. Sometimes better in terms of character arc and pacing, sometimes better because it’s the type of zombie movie that is action oriented. Instead of almost a full hour of watching the survivors survive, we get a montage of their survival that tells the story very succinctly. Within that time we see an amazing, separate story and relationship develop between Kenneth and another survivor on a rooftop, Andy – as they send messages to each other via dry erase board and binoculars (mostly regarding their ongoing chess game). Andy’s plot line pulls into it Chips’ plot line as well. Who is Chips? Chips is the dog! Yes, there is a dog, that happens to be used smartly and isn’t killed. Imagine that.

Now, trust me when I say Dawn of the Dead (2004) is far from perfect. There are plot points that are so absurd you have to shake your head at them. Case in point: The survivors can build tanks out of busses. Well, why not do that from the beginning? I like to believe this was just a set up for the introduction of Dead Reckoning in Land of the Dead, because that seems obvious to me. Also, the plethora of characters introduced are often there just for a zombie to eat. Which is fine, because zombies, but it also gives you a slew of useless characters that you really didn’t need and aren’t particularly interesting or plot driving.

If you’ve watched DOTD (2004) you may be wondering when I’m going to talk about the zombaby. Well, here I am, and this is all I have to say: seriously? Zombabies are creepy, especially when you consider they are a zombie in the womb – nice touch. But other than that it was totally tonally inconsistent and unnecessary – unless, of course, you’re just adding to the over-the-top actioniness of this zombie-free-for-all. So. Ok.

What I truly think as a missed opportunity was a reimagining of those bikers taking over the mall. Now THAT would have been an interesting study in hedonism for any “re” of this movie. Right? RIGHT?!

Anyway, I could probably go on talking about this particular reimagining for quite a while because there was so much crammed into this fucking movie. So. Much. Which I think plays quite a part in most people’s dislike of it. There is something satisfying about Romero’s simple approach to zombies. His movies have a beginning, a middle, and an end. There isn’t more than one thread tying everything together, and if there is a secondary plot happening it crosses through the main plot and carries on or ends. There isn’t much convoluted about Romero’s DOTD, but there isn’t much very exciting either; whereas with Snyder’s DOTD it’s all excitement and very little story (apart from Andy and Ken’s rooftop bromance).

Ultimately, I think you have to consider what kind of zombie movie you’re after and then, choose wisely. Be pissed that these two movies literally have nothing to do with each other, other than sharing a name, and then decide if you want to experience some Romero/Argento hedonism or some maximum Vinginess.

It’s a tough call, for me, but that’s because I always partake in my own little Ving hedonism. #BellaKeepingItCreepy