I’ll give you the vortex

Give me vortex or give me cake!
Hey, hold on, how about I just give you both?

Look, I know people are all health conscious, and I’m sure that bodes well for our bodies and well-being.*** But, today, today I’m going to talk to you about something nearer and dearer to my heart. Cake. Not hideous, cake-wreck worthy cake, but tasty, nom-alicious, worth a second glance, cake.

My friend Val and I each have a daughter born in the same year, six proper days apart. For three years, they’ve shared their birthday parties, often coming to an easy consensus on theme and foods. This year was a little different. And by a little different, I mean a lot. The main thing, though, was THE CAKE.

The cake isn’t something to be taken lightly. It’s the sugary culmination of celebratory joy that every kid (and come on, every adult), waits for. These two lovely gals had originally decided upon a Raven cake. You know, the Raven from Teen Titans. They both liked her broody and mysterious ways, and, I suspect, her costume. I liked the idea that I could take a giant round cake pan, bake two cakes (for the two different flavors they each wanted), cut it out into the shape of Raven’s head, use some purple, black, and white icing for her cape, the shadow inside her cape, and white for her glowing eyes.  I was even going to surprise those girls with two little LED’s under two pieces of cut plastic for her eyes and have them light up. What can I say? To see their faces in full excitement makes my day.

But, instead a change was made. A huge change. To THE CAKE. Raven was out. Uh oh.

The bad news was: how did I make a cake with two different cake flavors, with a TARDIS? The girls desperately tried showing me how to design the cake, but I couldn’t see what they were trying to show me. And by their frustration levels, it was clear that this was incredibly important to them. The research began. Val and I looked at dozens of cake designs. So many were so ridiculously bad that we’d giggle and dismiss them outright. I’m not a fan of sloppy cakes, nor did I think Val’s daughter, a Whovian through and through, would be the happiest in the least. I couldn’t let her down.

I continued to scour the internet and found a most excellent tutorial on how to make a vertical TARDIS cake. Standing up. Let me repeat that: standing up.  Without fondant, which makes a beautiful cake but tastes like cardboard-flavored candy. Not yum. This tutorial, instead, insisted that making modeling chocolate and cutting it out for this TARDIS was EASY. I believed it. Plus, I could make a round cake for the vortex in one flavor, and have the TARDIS in the other flavor, coming out of said vortex.  I could satisfy both girls’ requests easily, I was stoked! For the twenty-plus people we were expecting, there would be more than enough for everyone.

With the party on Sunday, I began on Friday. The first thing I did was make the modeling chocolate. The TARDIS guy, Cakes by Choppa on youtube (whose accent is so enjoyable to listen to), does a bit on doing modeling chocolate in the beginning.

I found that watching a few, and if by few I mean eleven, more videos didn’t make me terrified to do it in the first place. 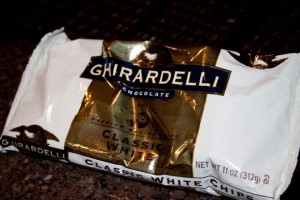 I’m epi-pen allergic to artificial vanilla, and it’s the only white chocolate that I know of that doesn’t contain it.  I also used corn syrup, which I’m not a fan of, but I found a large container at our bulk shop that hadn’t been refined into high fructose corn syrup. I could totally live with that.

I used the double boiler method, where one saucepan is shallowly filled with water, and a bowl that fits onto the top gets steamed from below. I cobble this together all the time. I don’t have a ‘real’ double boiler.  You can also do it in the microwave, but if you use the Ghiradelli chips, they’ll dry out super fast, so be aware of that.

Once I’d melted all the white chocolate into a lumpy, adipose mass, I added the corn syrup. Science in the kitchen makes all my brain bits happy.  The corn syrup turns the chocolate into this amazing goo-like substance that just sticks together. I separated a good half cup out and stuck it in a bowl. The large remaining mass got a royal blue dye bath. It takes nearly 1/2 of the Wilton’s gel to get that color. Don’t be surprised by that.

I stuck the blue chocolate into a plastic quart-sized ziploc and set it to cool. Dudes. Hear me when I say this: it takes at least 10-12 hours to cool and be used like clay. Plan ahead. If you use it before it’s completely cold and solid to be twisted into whatever sordid plans you have for it, it will simply, and slowly, ooze out of shape. 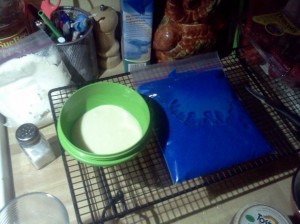 I set the modeling chocolate aside and began baking cake. LOTS OF CAKE. Thing is, my daughter and I are gluten free. You can use whatever cake mix you want, but I’m going to share the one I used.  You can yank out all the weird flours and just use a mix of regular and cake flower if you want to attempt this one. The recipe alone makes a thin 9×13 cake. It’s usually safer to double. For comparison, the first batch I made in kid flavor #1 (vanilla) was tripled. The second batch I made in kid flavor #2 (lemon) was doubled. 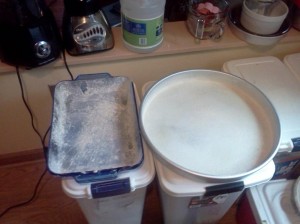 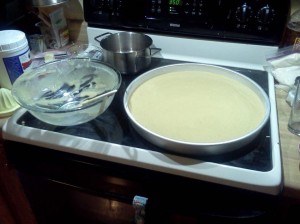 Also, since kid flavor #2 (lemon) was going to be the TARDIS, it definitely had to have more rigidity, so I added a half cup more flour. It was going to be a touch dryer, but it would have shape, it would be filled with frosting, and it would be covered in chocolate. Win-win-win.

I baked the round vanilla cake first. While it cooled I took large cardboard pieces and covered them in aluminum foil. (Pro-tip: I used a tiny bit of spray adhesive to keep the foil down.) I baked the large 11×13 lemon cake next – though since I had to stick it in the freezer for it to be super cold when I cut and leveled it, I should have done that first. In between I was making frosting. Glorious frosting. 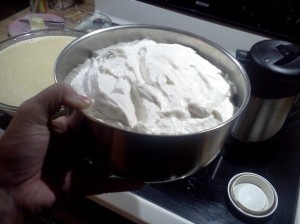 I’m not fond of frosting so sugary it makes your teeth hurt, or so rich the swallowing of it almost makes you gag. But I do like it sweet. And I do like it very fluffy.  Plus, butter kills my gallbladder, and well, I like to eat cake, so to the internet I went! I found a fantastic vegan recipe that I modified into my own tasty concoction, though tastes are so different, you’ll have to decide for yourself. In order to make the cake and all its bits be covered and glued together, I made 3 batches of the frosting. I did end up with about 2 cups leftover, but all things considered, that’s not that much in remainder.

Construction:
– Round cake is turned over onto surface. 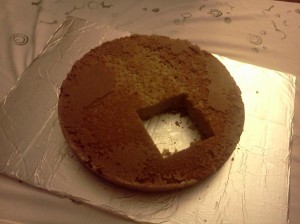 – Cut out square where the TARDIS will be flying from the time vortex.
– Cut 2/3 of that square off, through the middle. Place the thinner piece back inside the hole.
– Cover all bits, hole included, in the thinnest layer of frosting possible.
– Go to the rectangle cake, using same square template, cut cake pieces into squares.
– Make sure square pieces are flat/level to the best of your ability.
– Using the icing as glue, stack the squares. Then cover the whole standing rectangle with a thin layer of icing.
– Stick into the freezer 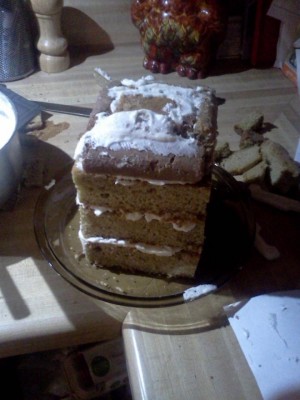 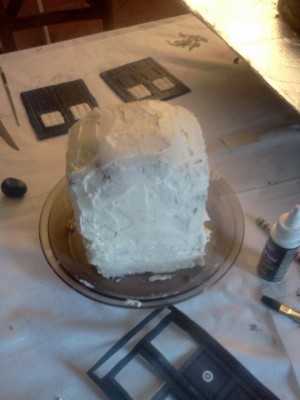 – Take pre-TARDIS out of the freezer, pry it ever-so-gently off its plate, and stick it into its TARDIS hole.
– Stick a thin dowel rod down the center to help stabilize the whole vortex-TARDIS thing. Add more glue if needed. 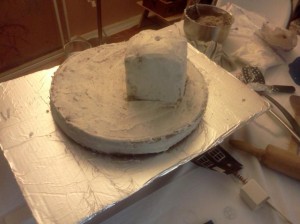 – Now, frost the hell out of the vortex. 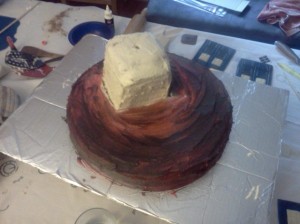 I decided to go with the red/black TARDIS because that was the intro in what Val’s kid was currently watching.  Split the frosting into two bowls. Using the Wilson’s black edible food dye I mentioned way up there, simply add enough to the frosting until it’s black. Which doesn’t require too much, that stuff is amazing.  With the other half of the frosting, use red food coloring (the standard) and make it red. Be creative and swirl that stuff on and all over the vortex.

Then, get down to the business of building the TARDIS a la chocolate.

If your modeling chocolate is solid now, (you’ll know by forming a simple square and it’ll either puddle or stay put), start rolling out the TARDIS sides.  You can follow the video, where he rolled it out while still warm and left it to cool, or do like I did and peel it out of the ziploc bag.

Now, here’s where I’m just going to tell you to just watch the Cakes By Choppa dude. Because I completely just stopped and started the video as I went along. My differences were I had a bigger TARDIS, so I used my print out, and I used the white modeling chocolate I set aside for the white windows (instead of the fondant he uses). 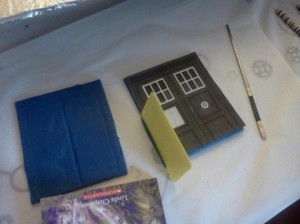 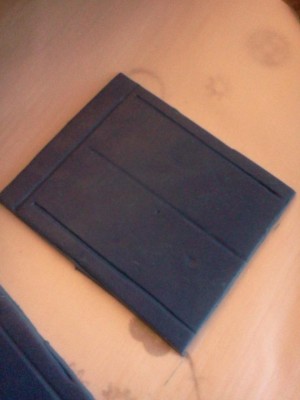 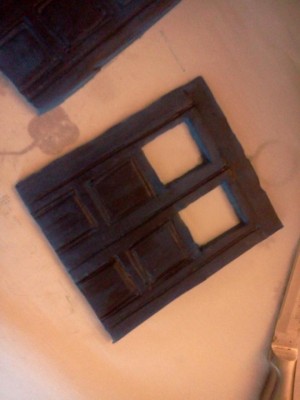 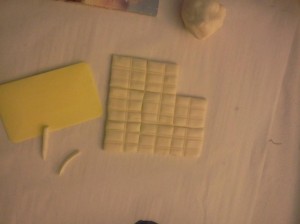 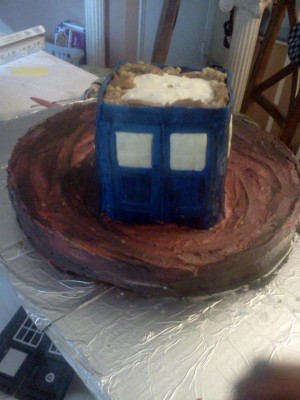 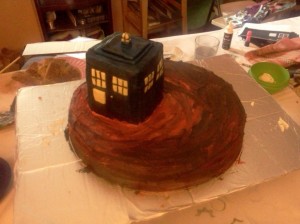 It was a pudgy TARDIS, in the end. But it was up! I used the Wilton’s black edible dye to put a color wash on the walls and to line out the windows and the light on the very top.

To finish off what still looked not-quite finished cake, I took some of the leftover red frosting, yellow-food-colored the hell out of it (really, it only made it a bit of a brighter red), and using  a giant decorating tip, drew the lightning from the vortex onto the vortex. Woah. That just got meta. 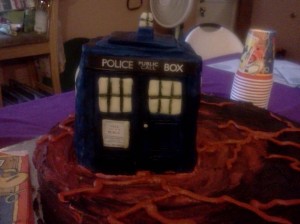 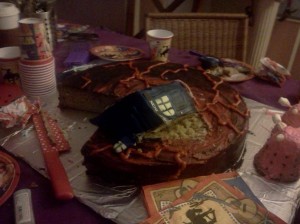 Though everything ended up being fun and enjoyable, I was so bushed that I missed the girls’ reactions, especially Val’s kid, who I really wanted surprise. Val told me when I asked, after barely catching her see it, that she loved it. WHEW! Moral of the story – do it earlier, and do it with help. It will take at minimum, one whole day. When you’re done, take a long, hot soak in the bath, a nap, get up, and then party. You’ll thank me for it.

Moral #2: The internet helped me build a TARDIS. And TARDIS’s are cool.

I can’t wait to see what the girls decide on next year. When new stuff gets mentioned, if it’s food related, my finger waves in the air as I say, “To the kitchen!” in Doc Brown style.

Hm. Maybe it’s time to start watching Back to the Future. I bet I could figure out a DeLorean.

***Editor’s note: Our editor goes by DEEP FRIED, I don’t think we really worry about healthy cooking, do you?