A character puts on a mask, picks up a baseball bat, enters a building, kills a man, steals his gun, kills another man, kills his way through the building till there’s no one left alive, and then leaves in his DeLorean, all to an atmospheric synthesizer soundtrack. 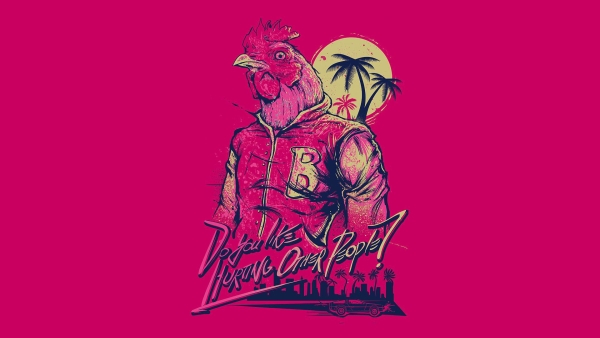 A question you’ll ask yourself quite often.

Hotline Miami, the co-creation of musician Dennis Wedin (of the band Fucking Werewolf Asso.) and game designer Jonatan Soderstrom (also known as Cactus, creator of a LOT of games), is a two-game series that’s violent, surreal, and very, very fucking addictive. Inspired by David Lynch, Drive, and the documentary Cocaine Cowboys, this series is an excellent blend of action and psychological thriller.

In the first game, Hotline Miami, you play as Jacket, an everyman living in a dirty apartment who receives a package with a mask and instructions to go to a gang hideout and kill everyone in the building, with no room for failure. Each level is something like this – you pick a mask (each with special abilities), enter a building, and slaughter every gang member in it, all by the suggestion of mysterious phone calls. You’re never sure what’s really going on until the very end, but it keeps you on the edge of your seat. 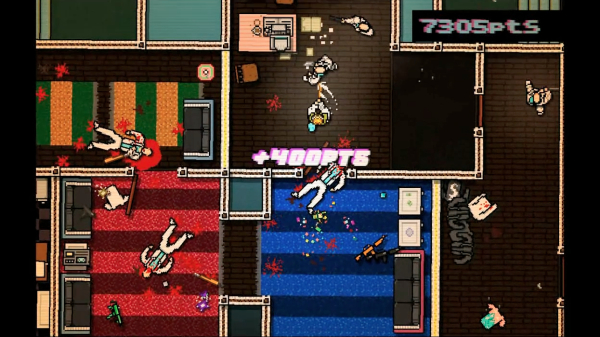 The makings of a pretty good combo.

Hotline Miami 2: Wrong Number, the sequel, takes place both before and after the game, in order to give you a bit more context and help you find out what was really going on. You play this game as a variety of characters, such as a detective, a reporter, and a gang of Jacket fans who emulate his killings in order to try to get the mysterious phone calls to begin again. You learn a bit more about Jacket and his friends, and everything sort of makes sense. Sort of. It’s not really meant to.

Now the actual gameplay. The levels take place in multiple-floored buildings viewed from the top down. You grab weapons and battle your way through each floor till you’re the last one alive. Here’s the catch: one hit kills you. So you’ve got to be careful to stay out of sight and isolate enemies. Plus, guns make noise and attract attention, so you’ll want to keep from using those as much as possible. You’ll be starting over a LOT. And when you complete a level, surrounded by bloody, pixelated bodies, you’ll be breathing a MASSIVE sigh of relief. MASSIVE, I tell you.

Despite the dark subject matter and the violent content, you’ll still come away from these games with a bit of a light-hearted feel thanks to the amazing soundtracks. Featuring a total of 71(!) songs between them, the songs range from pounding ‘80s-style electro to ambient sort-of-music, sort-of noise to psychedelic alternative rock and everything in between. Here’s one of my favorites, which you might recognize from The Guest!

Hotline Miami and 2: Wrong Number are both available now on all digital game stores, including Steam. Be forewarned: They are VERY violent, and there are a few dog deaths, which I know turns some people off. But if you just want the soundtracks, you can get those the same places. Which is way cool. But it’s a fantastic game if it’s your kind of game.