Hi, my name is Bella, and it’s been three weeks since I’ve played Hearthstone: Heroes of Warcraft.

Let me tell you about this freakin’ game right here. It’s a bitch. 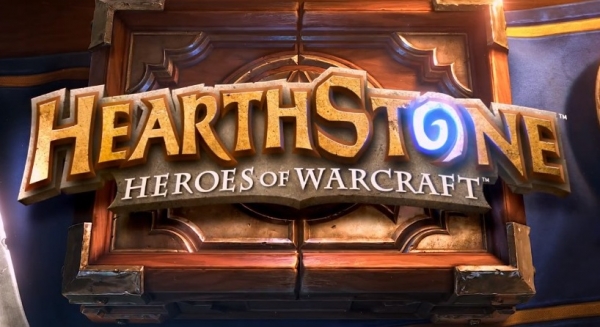 My roommate brought this game to my attention, knowing my love for games and my insatiable lust for World of Warcraft every three months. I had just finished writing about the last time I played Magic: The Gathering and I thought, yeah, sure, I can start up another card game like this. Surely I’ve grown as a person and my tolerance for the “luck of the draw” has improved.

Hearthstone is awesome, don’t get me wrong. The art is fantastic, the humor is on point and the sound effects tickle me. The decks are not typically stacked in any one classes favor and the characters, while repetitive, are fun and finger at my desire to launch WoW and get lost for hours in that world. The biggest difference is, there is no grinding. This is a card game. You play how you want and when you want and with the character decks you want, after you unlock them all. Ahhh, but there is the rub. Unlocking all of the characters/decks.

I launched the game and started as a Mage. She wasn’t any stronger than my actual mage in WoW; she wasn’t any weaker either. She took me through battle and victory of at least three of the other characters. And then, I went against the priest. He was the very bane of my existence. I played and lost with the mage at least seven times and then quit. When I finally relaunched, I chose a different character/deck and attempted to slaughter that damned holy man once and for all. Each character I used failed. 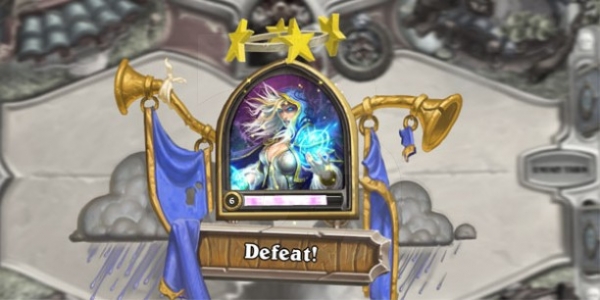 Now, my OCD is such that it kills me to not have defeated all of the characters with my starting deck, the mage. It’s also painful to have to skip over the priest and attempt to defeat the other characters. But, I figured it was better to unlock everyone else to see who I could use to smash his holier-than-thou face in.

The hunter in WoW is my favorite class. They are great to play solo and if you aren’t a huntard and know how to control your animal you can be quite useful when it comes to damage. The hunter in this case was less than useful. I started to make use of the warrior character/deck to just power through the other classes. I found that my ability to manage magic users was lacking, but as per usual I could smash my way through other characters with sheer brute force and copious amounts of unnecessary (though satisfying) violence.

When I had all other characters/decks unlocked I beat that fucking priest with my rogue. I never play the rogue class in WoW, but this isn’t exactly WoW. I didn’t have to have patience to build the rogue up to the power player it would be, it just was. While smashing my way through the other characters/decks I found myself struggling against the paladin. Like you do. Because it seems that whether actually playing WoW or playing a card game based on WoW paladins are always overstacked. The bastards.

Numerous times I attempted to destroy the paladin and unlock his character/deck. Numerous times I failed. TWICE I rage quit. Take that journey with me. I. RAGE. QUIT. I don’t rage quit games. I pride myself on NOT being that person, and yet… I had to carefully set my mouse to the side, step away from the computer and scream into a pillow. My frustration was visceral. 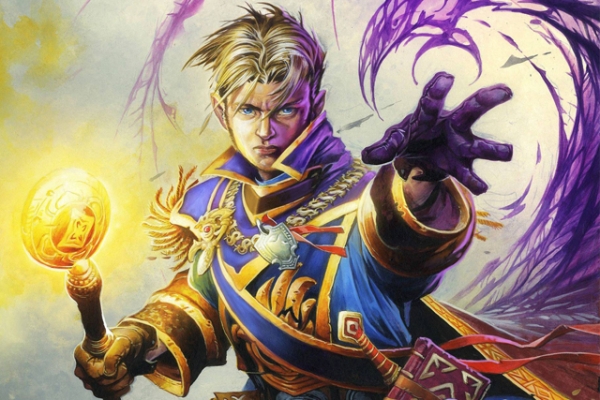 Finally I thought to myself: self, use your priest.

That damned holy man had been giving me fits from the start. He was the reason I broke my OCD game play rules and unlocked everyone else. I needed to beat him. Now that he was beaten and mine I could use him to destroy the paladin. It might take me some time to figure out who I’m going to use and how, but I can learn. I used my priest against the paladin no less than 17 times before I finally beat him. I had unlocked all of the characters/decks. I had rage quit twice. I had learned that no matter how much older I get I still can’t stand the “luck of the draw”.

Now that all of my characters/decks are unlocked I can keep playing to earn better, more unique cards. I can build decks of my own to create stronger characters. I can build up my characters to become feared foes. Or, you know, I can not play again until the itch for WoW hits me again and I refuse to pay for a subscription. I’ll probably play again soon. The awesomeness of Hearthstone: Heroes of Warcraft is enough to keep me coming back for more, and because it’s still in beta any bugs or kinks that I might come up against that causes me to throw a tantrum might just be fixed by the time I’m done kicking and screaming.

At the very least I can say that I played a type of game I swore off years ago. And, at the very most, I have all of my characters/decks unlocked so I can keep swearing at said game type.