Grandma Beat the Sore Loser out of Me

It’s no secret – I’m an only child – but I come from a HUGE family. My mother is one of 12 and my father is one of five. I have 56 first cousins on my mom’s side (all but four are younger than me). Crazy, right? Needless to say, with that much family, you have to find ways to entertain yourself and everyone else. Games. Games were the name of the… uh… game, where entertainment was concerned. My maternal Grandmother was a wiz at pretty much any game you put in front of her – which made growing up and playing games with her a nightmare. I hated it. Every time the words “Come on, we’re playing Scrabble,” were uttered, I immediately got pissy and wanted to stomp away and quit before the game even started.

Having more than enough experience with sore losers (as a mother of TWELVE), it didn’t take long for my Grandmother to dig her game-winning fingers into me and make me submit to her every gaming whim. There were three games my Grandmother fancied above all else, and time and time again she beat me with sheer pleasure and glee until I finally learned to just enjoy the game… and eventually win. 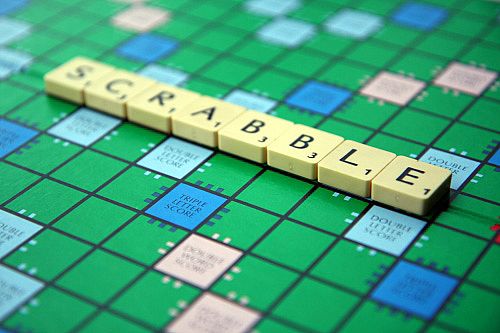 Scrabble
My grandmother couldn’t remember what day of the week it was sometimes, and she couldn’t remember that Food Lion was called Food Lion and not Red Lion (because of the color of the sign). But, dammit, if she couldn’t play some Scrabble. At least once a week we would gather around the table and inevitably start playing a spelling masters level game of Scrabble. I would reach into the bag and pull out tiles that resembled a foreign dialect of all E’s, I’s and O’s. My Grandmother would reach in and pull out a million dollar word. So would my mother. I think they were in cahoots.

One night while playing a particularly feverish game of Scrabble, I was so exhausted and defeated that I just cried. I had nothing left to give but vowels, and I was being destroyed on all sides of me by scores in the triple digits. I wanted to stop and go to bed, but NO, that was unacceptable. Instead, I was forced to stay put and play my last puny tile ‘Z’. I managed somewhere to form the word “za” and pull out a triple letter score on the Z. It was a good moment. And even though I lost the game, my Grandmother was proud and let me have a small victory by heading to bed early without playing her last few tiles. I didn’t peek at them either, I like to think she didn’t have a leg to stand on. 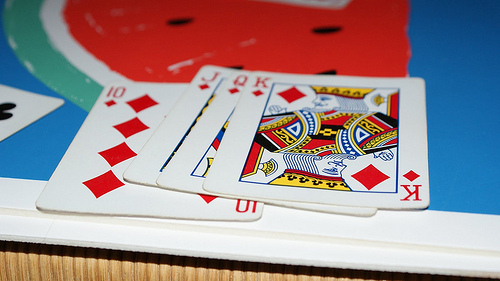 Rummy 500
I’m a sucker for card games today. I have decks stashed away in my house everywhere and am always willing to break them out for a quick Solitaire, Slap Jack or Rummy 500. When I was younger I didn’t understand how annoying it was to play sets of everything – ruining runs for other players and thus making the game less challenging, and ultimately, less fun. Every Sunday we would gather around with bagels and coffee cake and a deck of cards and get ready for the impending beat down my Grandmother would provide as she hit the 500 mark within 3 games. Her strategy was simple. Play what you had – then pick up everything else. She would literally pick up the discard pile from the very beginning. It was almost impossible to beat her at that point because she had EVERYTHING in her hand.

Similar to my Scrabble experience, I wanted to cry. I wanted to throw my cards down and scream 52 card pick up instead of trying to make runs of anything. Except she wouldn’t let me. And I sat, with my half eaten bagel and my ten cards of nothingness staring at the discard pile wondering what I could do to get out of this game. And then, I did it. I picked up the entire discard pile – all the way from the beginning. I had every card in my hand and just knew she was going to reach 500 before I could lay anything other than a 3,4,5 run on the table. Much to my dismay – she didn’t reach 500 anytime soon, and I was able to play through most of what was in my hand. It felt good. Nearing 500 and almost beating the pants off my Grandmother. Key word here: ALMOST. With six cards left in my hand, she laid down her final run and scored out at 515, thus ending the game. I hung my head in defeat, but smiled because I had learned how fun it could be to play dangerously. 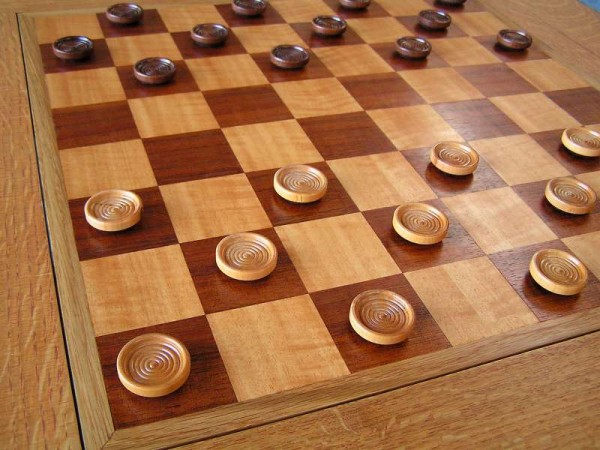 Checkers
My Grandmother was the Queen of Checkers. I never beat her. I never had fun playing her. None of her kids ever beat her and none of her 56 grandchildren ever beat her. She didn’t beat the sore loser out of me with Checkers – she just beat me.

It’s been years now since my Grandmother has passed away and I still enjoy games in all forms – card, video, tabletop. I don’t get overly competitive and I try to enjoy every aspect of the game that is presented before me. I’m no longer a sore loser, because I understand that at the end of the day it doesn’t matter if I’ve won or lost the game, it’s that I played it and enjoyed the company of the people I was playing it with. I have my Grandmother to thank for that. Also, for the fact that I NEVER play Checkers.