The stereotypical geek girl is generally slightly overweight, super nerdy looking, has no clue how to properly apply makeup or even match colors for their clothing, and really has no desire to do so.

Before you all get up in arms, yes, it’s a stereotype and not every geek girl is like that. However, stereotypes are stereotypes because that person is out there more than not.

There are plenty of amazingly gorgeous women who are geeks. Adrianne Curry (America’s Next Top Model Season 1), Mila Kunis (That 70’s Show, Family Guy), Danica McKellar (Wonder Years), and Veronica Belmont (Tekzilla, Vaginal Fantasy) are examples of women who are not only gorgeous but also understand makeup, colors, and style – and they are all super nerds. I even know some really nerdy girls that can do makeup better than some fashion models. Personally, I’m kind of plain looking and definitely overweight…

I didn’t grow up super girly. My brother and I were the only two children in our small family for six years, so I did a lot of boy stuff with him. Even as a teenager, I always got along better with boys than girls. I did my makeup like most female Mexican teenagers did with the white eyeliner and dark brown lip liner. My step-father would sing the Circus Theme  music when I would come out looking like that. I didn’t care, I thought I was gorgeous.

I wasn’t. I looked like a dumb white girl trying to be Mexican. Most of my friends were Hispanic, so it was only natural that I wanted to fit in and be like them. I learned a few years later that what I did was not right for my skin tone, eye color, and face shape.

As we learned from my first post here, I denied being geeky when I was younger. I loved learning things, though, and a woman that I hold close to my heart took me under her wing when I was 16. She was nerdy in her own way, but she was very insistent that I know how to do makeup properly. She was a real life beauty school dropout (I think of the Grease song every time I say that). She taught me the ways of brushes, how to dye my hair properly, and colors. Even then, she didn’t teach me everything. I learned later from a model how to blend foundation a little bit better. It was around this time I also learned that I was allergic to most black colored eye shadow, eyeliner, and mascara. I really don’t do makeup much now that I wear glasses, though.

This is all background for the present. I paint my nails at least once a week, and they look mostly professional. I have an obsession with both nail polish and makeup. I have a small collection of nail polish (compared to some of my friends) and I love buying makeup from indie creators. I know what brush to use for what style of makeup, and I can get nearly any look you want done to you. I have dyed my own hair for the past 11 years and have done nearly every color you can think of. 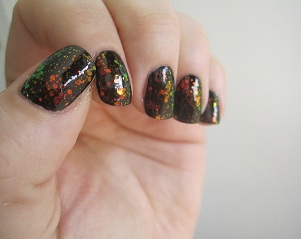 I give advice. I know what colors go with that. I know what outfit should be worn with what type of jewelry. I understand that even though it fits you, it doesn’t mean you should wear it. Bearing that in mind, I also understand how to look stylish in clothing that fits your curves or lack thereof. I know how to make women feel as pretty as the models that we look up to no matter what they look like most of the time.

Talking of all of this makes me want to go to beauty school again. I have the goal in life to be a police officer, but nails, hair, and makeup are always passions for me. I am constantly torn between the two, and they both seem so much opposite ends of the spectrum that it pretty much sums me up.

If you ever want to know about how to fight or what color you should do your nails for the outfit you’re going to wear, I’m pretty much your girl. Girly girl geek girl. Who knows how to hurt you.

…yeah, that’s me in a nutshell.