Elmer Fudd was not a smart man. Let’s be frank, he doesn’t even represent mediocre intelligence. He did however, know a few things: rabbits are delicious.

Now that an armageddon is upon you (not me, I’m too smart for that sort of thing), you’re going to need to feed yourself. Who knows, maybe a group, maybe you’re still trying to impress that cute someone you found scavenging a dumpster. They’ve got that whole fit yet dirty look that I know you like. While I’m not going to call this a romantic meal in uncertain times, well, do what you will.

Rabbit snares are easy to make, and as long as there is grass for the little varmints to eat, they’ll be hopping along fine, multiplying as they do. Really, you’re doing this post apocalyptic world a favor, keeping the hopper population down. Ask the Aussies about that.

So, what you’re going to need, aside from a fire, which you always need in an apocalypse (which, let’s be honest, aren’t that hard to find amidst all the smoldering rubble), is some good string, twine, or rope, some small branches, two traffic signs, and a rock.

When it comes to surviving the end times, you want to do as many passive things as possible. Save that energy for staying warm, smelting robots, or fashioning idols for profit. A snare is a lovely little thing. Take some of Ron Popeil’s sage advice- SET IT, AND FORGET IT! 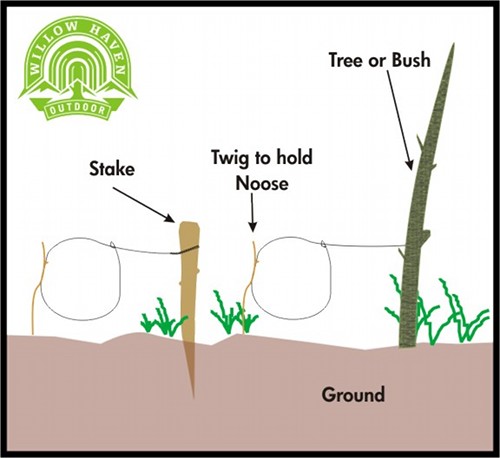 Now, snares are simple, and you can easily make something along the lines of the above in a few minutes. Find little pathways, or little cozy nooks that a rabbit might like to snuggle up in. Peter Rabbit’s family lived under the root of a big fir tree, and those little rabbitses looked fat and happy. But as seen below, you don’t want to get too adventurous. See this? 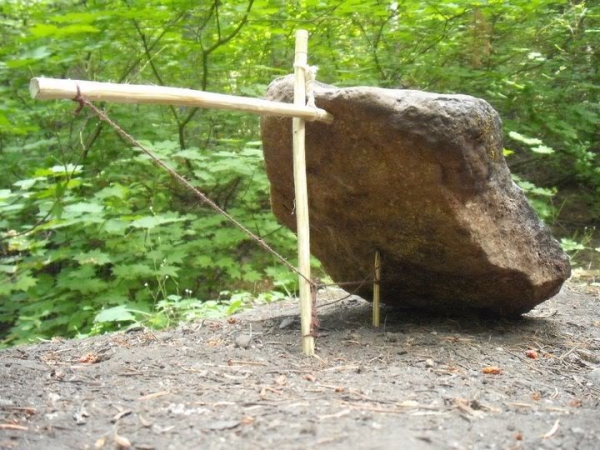 Sure, that’ll kill it dead, no doubt. Your hands will stay clean, for a moment. Then you realize that you’re going to have to sieve it to get the tiny pulverized bones out, and inexperienced hunter that you are, you’ll be looking for the nearest Acme Hospital when you Wile E. coyote yourself with that boulder. Don’t do it.

A fricassee is somewhere between a saute and a stew, if you’re wondering. So here’s what we do, we clean our rabbits, chop it up into slightly bigger than bite size pieces, and head with our signage to the fire. Street signs, I heard you asking earlier? I ignored you then, because I do what I want. But the signs are your tools, and it’s not like anyone needs them now. I prefer a nice round stop sign for surface area, but speed limit would be okay, or even a bright yield for the second part. Street signs are relatively durable, large, readily available, and coated so that any paint on them won’t just strip off. You can use them as shelter or to signal airplanes too, but that’s for another time. On the back of your street sign, arrange your meat, then throw the sign on the fire like an impromptu saute pan.

Now, get busy, Mr. or Mrs. Brawny. Take that rock to sign number two and start beating it. You want to curl the edges up, because now we’re making something pretty similar to a wok. Get some clean water, and maybe pick some tomatoes if they’re nearby. In they go, along with any herbs found near where you got the rabbit.  Nature provides like that. If you had a big brick oven and some downy hay, we could do an elaborate meal, but if you did, you wouldn’t be on such hard times, no? Scrounge up a little salt, or elder gods help you, some crumbled up saltines to season that water, then when the rabbit is par cooked, chuck them in and let it all bubble. It’s game, so you’re not looking for a chicken white meat. Push the old sign away, psuedowok to fire, and cook it until it’s done. Push on the meat, using the finger test to check for doneness, but not Bella’s finger test, which involves more coeds than you have available. Serve simple on a styrofoam plate, because recycling just isn’t an issue any more. Bon appetit!