Home/Nerdery Publications/Film Review: Me and Earl and the Dying Girl
­

For a few minutes, teens with diseases was a hot thing in popular media. The success of The Fault in Our Stars* led to Fox’s The Red Band Society (which is apparently a remake), and in my online libraries I saw several books about teens who had cancer, or other illnesses, living their lives and finding love with the quarterback, or the cheerleader, or the track star, or the goth musician, or whatever. Wish fulfillment, on the part of the rash of books that came out after TFiOS.

But the new film Me and Earl and the Dying Girl is, I think, a different kind of wish fulfillment, and it’s for nerds. Nerds who don’t fit in, who have specific (and weird) hobbies, who just want to make it through high school. 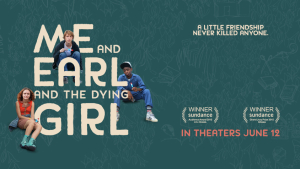 The main nerd is Greg (Thomas Mann, It’s Kind of a Funny Story), the main character of the film. He’s a film nerd, and a big one. He loves classic cinema; he owns a bunch of old film cameras; he even makes his own movies, recreating great films like Midnight Cowboy and Apocalypse Now, but with names like 2:48p.m. Cowboy and A Box of Lips, Wow!. With him is his “co-worker” Earl (RJ Cyler), his best friend since kindergarten. Earl, like Greg, likes classic cinema (and boobs), and since they were young they’ve found themselves apart from everyone else. Other than this, Greg’s ultimate goal is to be that forgettable guy who has an in to every single group in the high school, and he’s succeeded to this point.

As senior year begins, Greg’s mother (Connie Britton, American Horror Story) tells him that a classmate, Rachel (Olivia Cooke, Bates Motel) has been diagnosed with cancer and he has to go over and be nice to her. Greg doesn’t want to, but he eventually gives in. After negotiating past Rachel’s mom (Molly Shannon, Hotel Transylvania), and explaining his situation to Rachel herself, they spend the afternoon hanging out. 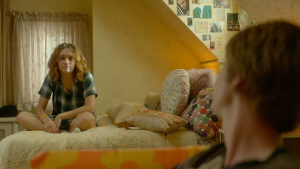 As the year progresses, so does Rachel’s illness and her friendship with Greg. But here’s the thing: Rachel doesn’t want pity, and Greg doesn’t want to let people in. It’s a very strange association, but it’s not without humor and heart. Especially when Earl reveals that he and Greg make films, and Rachel wants to see them.

In addition to the above actors, the film also stars Nick Offerman (Parks and Recreation) as Greg’s sociology professor dad who always has a weird food option for the boys, Jon Bernthal (The Walking Dead) as the cool history professor with the catchphrase everyone knows, and Katherine C. Hughes as Madison, the pretty girl who is a moose that keeps stomping on Greg’s heart without knowing about it. (It makes sense in the movie.) There’s also a great cameo by a very famous actor, but I’m keeping my mouth shut about that.

The film is rife with practical graphics — the yarn equivalent of claymation, army men with homemade parachutes, paper tulips, and such. These items are all included in Greg and Earl’s films at various times, and they build to a very cool reveal at the end that I really don’t want to spoil so I can’t even talk about it.

Directed by Alfonso Gomez-Rejon (who’s done several episodes of Glee and American Horror Story) and based on the novel by Jesse Andrews (this was apparently his first book), the film runs an one-and-three-quarter hours and doesn’t feel like it drags anywhere, except a little bit at the end. It’s full of nifty framing and camera work, good sets (which look mostly like actual locations), and silences, especially between Greg and Rachel. The film also won the Sundance Grand Jury Prize, if you care about things like that. 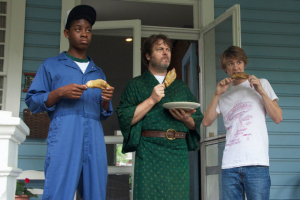 As nerds, we all have something that we’re passionate about. As nerds, it’s likely most of us were teased (or worse) about it. As nerds, we’ve held on tightly to that one friend from when we were young, and we’ve resisted change within our friend group (of two). This film is a nice bit of nostalgia in that regard. However, it also has some very uncomfortable moments, most of them related to the way Greg seems to make everything about himself in fairly typical straight white middle-class teenage angst. And I found it all the more uncomfortable because it was real to me, even now. Middle-class white** people often make things about themselves even when it clearly isn’t, or when they have no leg to stand on. This hits Greg pretty hard in the movie when he sees how Earl (who is black) deals with Rachel’s illness, although it doesn’t necessarily stop Greg from being the self-centered person he is. And yet Greg still makes room in his life for Rachel, and forms a genuine friendship with her, and in the end maybe she doesn’t improve his life (because getting through to a teenager is hard, even if you’re a teenager) but he definitely makes her feel better.

I’m pretty sure I wouldn’t have seen this movie on my own, but my partner won tickets to a screening, so we went. I’m not unhappy I saw the movie, but I didn’t talk much about it afterward, like we did after Days of Future Past or Age of Ultron. I also didn’t think a whole lot about it afterward. It was a movie that made me laugh, and made me feel a little uneasy, and was a little sad. I mean, one of the three main characters has stage-four cancer; that’s pretty much the storytelling hallmark for “this isn’t going to be a joyride”. But it had its moments of the celebration of nerd-dom, and some honestly good dialogue, and I think it’ll speak to some people.

So, y’know, go see it if you want. Especially if you’re a film nerd. You’ll get all the benefit of the film stuff, and you might even see yourself in there somewhere.

How about another opinion? Check out what our new author Celestia Price has to say about the film!

This film is rated PG-13, but the only really objectionable thing is swearing. I mean, these are high school students, mostly. They swear. But there’s only a small bit of violence, and no nudity or explicit sex. The hardest thing for kids to deal with will probably be the “main character has cancer” angle.

* I did enjoy the book. Haven’t seen the film yet.

** Not just white, but there’s an awful lot of “~shakes head~ white people” on Tumblr, where I hang out.