Growing up I would come home from school with a plethora of unique cartoons to fill the void while doing chores or homework. Some of them I look back on today and wonder: who the fuck thought these cartoons were a good idea? I’ve gone back and watched some of these and I still love them, but I’m fairly certain they were never meant to be watched and enjoyed by children, let alone pre-teens and teens with impressionable young minds like my own. Nickelodeon, you were a special place for me to hone my weirdness, thank you. 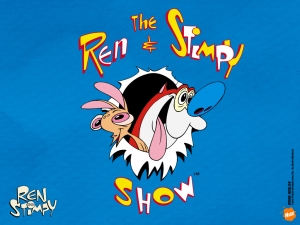 The Ren & Stimpy Show
It’s a classic, that’s for sure. I knew I would love this show from the first episode I ever watched, Space Madness. Papa Blitz and I sat and watched this cartoon together. Confused by which wretched creature was the cat and which was the dog at first. Together we laughed and snorted at Ren’s obsession with his “ice cream bar”. By the time the narrator/announcer made an appearance, slapping his ass cheeks on Stimpy’s head to get him to NOT press the button, we were in hysterics. Ren & Stimpy, while eyebrow raising and funny, was grotesque and bizarre and probably one of the best reasons I have the sense of humor I do today. Not to mention from this we can continue to enjoy Powdered Toast Man AND Shaven Yak Day. Note to self: Buy salve.

Rocko’s Modern Life
He was a wallaby with a best friend named Heffer, who was a steer, not a heifer (as his name would suggest). My tolerance for gross humor knows no bounds and this cartoon was a fulfilling little diddy stuffed with snot and farts and strange frog-type neighbors that may have had more sexual innuendo than is appropriate for an afternoon cartoon. And, don’t worry, I didn’t forget about Spunky the pet dog. I’m fairly certain this was the first place I’d ever seen a dog, real or otherwise, drag their ass across a carpet. Unsurprisingly, this cartoon never ceased to get a chuckle out of me. The bright colors and surreal illustrations, coupled with the lilting Australian accent of Rocko, were just about enough to keep me watching. And, let’s not forget Conglom-O. Every time I venture a Wal-Mart this is what I see. I should really start wearing a blue shirt with purple triangles when I go there – just to really bring it all home in my head. 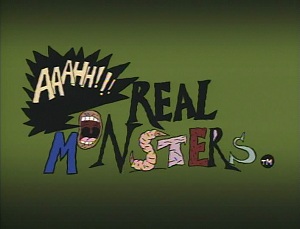 Aaahh!!! Real Monsters
Can we take a moment to appreciate the hairiest armpits, at the time, on full display in cartoon form here for a moment. I fucking LOVED Aaahh!!! Real Monsters. I even had plushes of the three main characters. I love the idea of taking kids’ imagination about monsters and turning them into a “reality” that is relatable, albeit twisted. This is probably the most decent of cartoons for kids, really. Following a group of monster friends learning how to be, well, monsters. Don’t worry kids, YOU’RE not monsters, these guys are and they are going through the same things you are, just under a dumpster in NYC. I can imagine a time, though, where younger viewers may have wanted to emulate Krumm, skipping showers and poking at their own eyeballs. Gross. 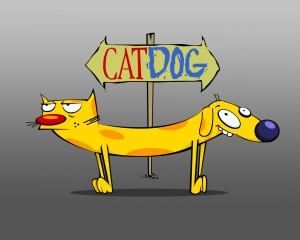 CatDog
I read somewhere that CatDog’s relationship with itself was similar to that of Laurel and Hardy or Abbott and Costello. Here’s why I don’t agree. Laurel and Hardy and Abbot and Costello could take a shit if they needed to! Sure each of CatDog’s side had it’s own name, voice and personality, but they were conjoined in the middle. I spent my time watching CatDog wondering if one of them ate, did the other get full. How did they poop? Did one of them get dizzy having to walk backwards all of the time. Now, I know, this is a fucking cartoon. But come on! The logistics of their conjoinment was too much for me to stomach. Ha. Stomach. See what I did there? 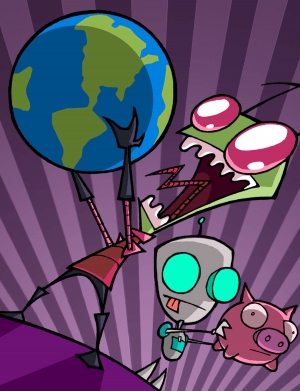 Invader Zim
Let’s everyone sing the doom song. GO! Doom Doom Doom… Okay fine, I’ll finish singing it on my own. Invader Zim was, nay IS, brilliantly twisted and completely NOT for kids. The amount of illustrated information was even too much for my adult brain to take in and I have to watch episodes in bits and pieces to catch everything. It’s like reading Transmetropolitan; every time I pick up an issue I find more in the art that I missed before. I could write about Zim forever but let’s just focus on the one thing that really isn’t kid friendly. Destruction. Zim was an alien obsessed with subjugating the human race and destroying it. While the antics that ensue between Zim and Gir and his human enemy, Dib, are hysterical, the continual input that humans are nothing more than meat sacks that should be destroyed is a little upsetting. I mean, it would be upsetting if it weren’t entirely true, but at the time kids watching the show may have been a little more optimistic about their plight in the world. All of that aside, who doesn’t want to sit down and watch a cartoon with a hidden bloody Gir in every episode? I mean, I do!

I’m not upset that these were some of the cartoons I got to watch growing up. They put humor into a surreal perspective and I’m glad for having been a latch-key kid with these characters as my babysitters. I mean, really, without some good and twisted cartoons, how are you going to grow up with an appreciation for… the good and twisted?