In 1998, living in a small dorm room somewhere in Florida, I happened to be up late one night and caught an odd beast of a show.  Thanks for my freshman year roommates, I’d developed a taste for pro wrestling during the early days of WWF’s Attitude Era, and at the height of the WCW/NWO storyline – in other words, during the core years of the Monday Night Wars.  But whereas those shows were slick, televised entertainment, this new show was something else.  Grainier and lower-budget, sure, but what caught my attention were the impossible kinds of moves I saw these guys pull off, all of it stitched together with the kind of backyard intensity that reminded me of neighborhood kids trying to form a metal band.

Extreme Championship Wrestling (ECW) hooked me pretty quick.  The brainchild of Paul E. Heyman, ECW was the underground “little promotion that could,” drawing a small but fiercely loyal fanbase throughout the late 90s, while professional wrestling itself achieved new heights of hype and mainstream attention.  ECW’s basic approach to remove the “sportsy” elements from the artifice of wrestling.  It’s fake – it’s performance, and ECW implicitly acknowledged it by revelling in its excess.  They were the KISS of professional wrestling: it’s a show, so give them the biggest show you can give them.

The only catch was, this was like seeing KISS, only with the musical quality of, say, the most awesome indie band you ever saw.  They could do bigness and spectacle, but wedged in between it (and sometimes during it), you also got a bunch of unexpected flavors.  It sounded sort of like the music you already knew, taken in new and weird directions.  The “wrestlers” in ECW were usually smaller, shorter, more likely to go to the top rope, and far more technically skilled, than many of the muscular brawlers who made up the upper eschelons of the Big Two companies at the time: Hulk Hogan, Lex Luger, Sycho Sid, Vader, Undertaker, The Giant, etc. etc.  The Big Two took note, which is why you’ve maybe heard of Chris Jericho, Eddie Guerrero, Rey Mysterio, Mick Foley, or Chris Benoit.  Even a fella named Steve Austin did a run, a year or two before he’d become Stone Cold.  These were guys who could put on a show.  They were quick and athletic.  They brought styles from Mexico and Japan to American audiences.  They made you care and want to know about what the next move would be.  They spoke a language you understood, in every dialect they could find.

Fans got smarter, too.  ECW’s rise runs not-too-uncoincidentally with the rise of the Internet.  Suddenly, the town-to-town nature of the business could be arrested.  An overheard conversation outside an arena could be overheard a world away; in an industry with a (suffice to say) sketchy history of labor relations, any disgruntled figure could find an audience.  Internet fans appropriated the carnivalesque lingo of the wrestling industry, knew who called the shots behind the scenes, got wind of the backstage goings-on.  Fans who knew a wrestler was soon departing from ECW was subjected to endless ridicule; interviews that mocked the safe and mainstream Big Two were commonplace.  If ECW’s wrestling expanded the dialect of its fans, then the fans expanded the space of ECW to encompass the entire landscape of the business. 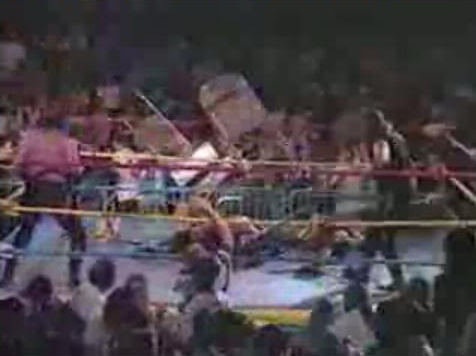 The rings would have a whole sinister architecture to them.  While the old school wrestling show might break out a table once or twice a year to really scare the kids with a moment of over-the-top “holy crap, that’s evil,” ECW rings would routinely be adorned before the match with configurations of ladders, or folding tables arfully arranged between the lip of the ring and the guardrail.  The ring inside always seemed to have more give than the big boys’, but the floor outside eschewed any sort of protective mats.  Sometimes you’d almost be happy to see a fella go through a table – at least there’d be something breaking his fall.  In perhaps ECW’s most notorious incident, anarchic fans threw dozens of folding chairs into the ring after legendary wrestling champion-turned-hardcore icon Terry Funk called for one from the crowd.  Years later, the WWF would start experimenting with wild backstage brawls, or ridiculous “hardcore” matches that would spill out of the arena and onto the streets – all in an attempt to reproduce the potent “possibility space” of the ECW ring.  Maybe they went too far outside the “magic circle.”  ECW seemed to understand that whatever was in the sights of the camera was fair game – to venture outside those walls and those fans was besides the point.  Everything you see is potentially part of the show; everything outside simply doesn’t matter – apart from the knowledge of the business that you could bring in with you.

Some of the characters were legitimately “hardcore” and frightening.  Sure, Raven’s gimmick was not so much “frightening” as it was plugged into the mid-90s post-grunge zeitgeist, but The Sandman was a whole other beast.  He came out in a wrestling shirt, blue jeans, and boots, looking for all the world like the guy who would get thrown out of a biker bar 30 minutes before last call, spoiling for a tussle.  He brought a legit beer paunch to the table, and as an added bonus was legitimately drunk off his entire ass while wrestling.  His matches were hardcore spotfests – you know you’d see multiple tables smashed and someone’s face smacked off with a kendo stick – which only served to create a fantastic alchemy: no matter how you sliced it, dude seemed pretty badass.  Hell, even the referrees would sometimes batter each other. 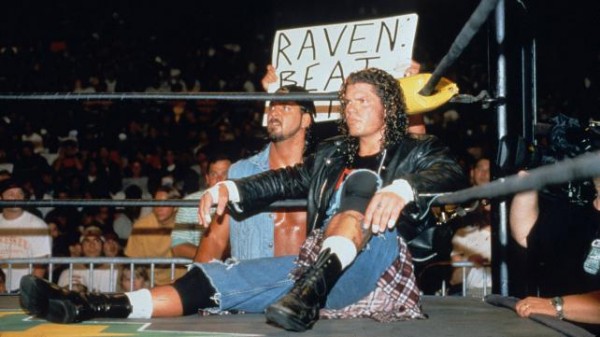 The barriers between the matches and segments were far more pourous.  A match could devolve into a brawl when five other wrestlers came pouring out of the back to further any number of feuds.  Eventually, the ring might clear way down to just two, and – what the hell – a ref would materialize, the bell would ring, and the next thing would start happening.  Wrestlers would grab the microphone in mid-match to launch into some tirade.  It was programmed, of course, without ever seeming programmed.  Rather than using wrestling’s inherent fakery as the fodder for some sort of postmodern irony, ECW simply rolled with the punch: each artificial moment seemed to be carried forward with organic momentum.

The crowds were small – you could tell they were small – and made up for it by being five times louder.  Wrestlers inspired chants.  The smaller crowds could light up in an instant if someone decided that the villain in the ring needed to “shut the fuck up!”  And a gasp-worthy hardcore spot would earn an appreciative: “Holy shit!” chant, or, more often, “ECW! ECW! ECW!”

And in that respect, ECW was as compelling for its ethos as for its actual product.  Unlike WCW, and  WWF, who tended to define themselves at any given time by its biggest stars (Ric Flair, Hulk Hogan, and Steve Austin in particular), ECW defined itself as a company first, as an ethos in the most meaningful sense of the word.  It made all the sense in the world for a fairly average wrestler, who overcompensated with more raw enthusiasm than any 10 wrestlers you could find schelpping their way through lame fireman or leprechaun gimmicks over at the Big Two, to become the company’s standardbearer.

Tommy Dreamer, the lovable loser with heart to spare, was Philadelphia’s Rocky for the modern age – a selfconsciously postmodern Rocky, maybe, one who could use the excessive space of wrestling to perform even bigger feats of heart and sacrifice.  He’d get brutally caned by The Sandman, enduring very real pain, and double down on that thin-looking layer of reality to ask “Thank you, sir, may I have another?”  He’d come within inches of beating his nemesis, Raven, only to be jumped and put through a table.  He was inventive, the “Innovator of Violence,” using whatever crazy shit fans would bring to the arena.  Combined with his close-but-not-quite scrappiness, he was the poster child of ECW itself.  He didn’t need to win; it wasn’t about that.  As Liam Neeson would remark to Christian Bale a number of years later: “You have to become an idea.”  Hulk Hogan could wrap his orange skin in the American flag, and Ric Flair could strut and “woooooo.”  Tear away the props, and bring it all back to a working class fella in a black T-shirt and track pants.  Tear away the costumes and make the the ring, junked with tables and chairs and barbed wire, into a sort of uniform.  Do that, and you’ll find Tommy Dreamer.

In acknowledging wrestling’s artifice, ECW found new ways to get back to its mythological core.

So, if you ever happen to let your kids watch some wrasslin’ on TV, but you want to breed a smarter brand of wrestling geek, show them ECW.  Wait, no.  Wait until they’re about 16 or 17.  Then let them start catching up.  It’s not everyday, after all, that you get to watch a revolution unfold – and even the small kinds, where big dudes still pretend to beat each other up – can be the sources of some interesting insight.