The other night, Mrs. Twisted Pixie and I got the hankering for pancakes. It was one of those cravings that just had to be satisfied or it would haunt us the rest of the evening. So we ran an inventory check on our pantry to make sure we had everything. Butter: CHECK! Flour: CHECK! Syrup: DANGEROUSLY LOW! Uh oh. You can’t eat pancakes without syrup. It’s like having a peanut butter and jelly sandwich, sans jelly.

Faced with a full-on culinary crisis, I did what any rational nerd would do: I set about to make my very own syrup. Now, I had never made syrup before. I have, however, been around the kitchen once or twice and I’d like to think that I know a bit about how things work there. The rational part of me knows that syrup is a lot like a glaze and I have made plenty of those. The last time I made pork chops, I put together a cranberry reduction glaze for them that was out of this world. This wouldn’t be that much different.

First off, I needed to get my ingredients together. A glaze is simple enough. I would have to get my base together which consisted of butter and brown sugar. As for flavor, I really enjoy a light citrus tone to compliment the heaviness of a syrup so I needed some orange extract. Then, for a little kick, I would add a taste of bourbon as it pairs really well with the orange. With all the tools in my toolbox I was ready to begin. 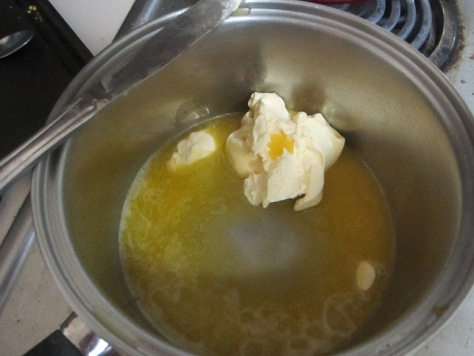 I started with the base. This is how I begin every glaze. I melted a cup of butter into a heavy-bottom saucepan. With butter, you need to make sure that the temperature is hot enough to melt, but not burn. If the fat from the butter separates and starts to turn black, you have gone too far. Anything else you add to the mix will have a bitter and burnt taste to it.

The other component to the syrup base is the sugar. This is going to be the part that gives the glaze its color and texture. I like using brown sugar because the flavors are more robust and complex than your average granulated sugar. Also, when brown sugar is combined with the right ingredients, it makes a nice pairing with a lot of savory dishes. You can’t really say that about white sugar. 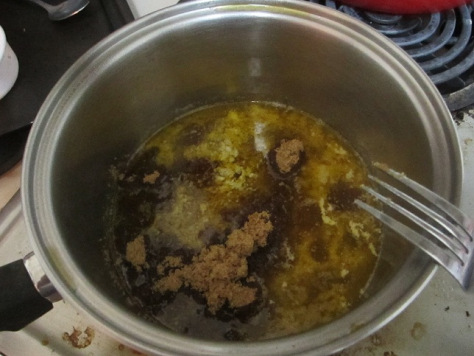 With a fork, I stirred a cup and a half of brown sugar into the melted butter. Mix well until the resulting liquid is a dark brown. Turn the heat up to a medium high heat (if your stove dials are numbered 0-9, then put it on a 6). It wont take long for the mixture to to start boiling. Grab a spoon and start stirring. You have to constantly move the syrup-to-be, or else you risk burning sugar to the bottom of your sauce pan. That would not only leave you with a hell of a mess to clean up later, but also your glaze will be spoiled. No one really like the taste of burnt food. 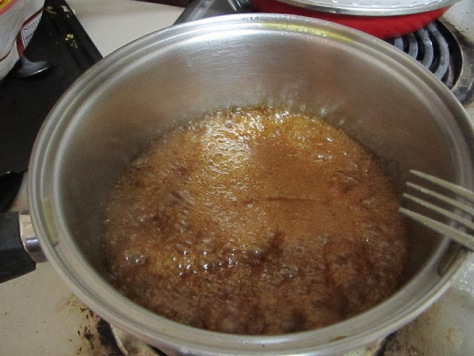 Once the mix has been boiling for a full minute, lower the heat to a medium setting (4-5) and keep stirring until the liquid is simmering. You want the mix to be JUST below boiling. There should be some good steam coming from your pot now. This is the secret to a reduction sauce. A lot of chefs want to make it sound very complex, but a reduction is simply cooking off the water out of a sauce so that you are left with concentrated flavor. There. Now you know.

Once the syrup is simmering, we are ready to create a flavor profile. Since we had decided on an orange bourbon syrup, I added 2 tablespoons of bourbon (don’t worry, most of the alcohol will be evaporated by the time we are done) and 1 half teaspoon of orange extract. Bring the mix back up to a low boil for about a minute so you can cook off some of the alcohol from the bourbon. Remember to keep stirring. After a minute lower the temperature and stir until it is simmering again. You’ll probably notice that the syrup is very watery right now. Don’t worry, that’s where the next 5-10 minutes of your life comes in. The more steam that comes out of the pan, the thicker your sauce is getting. The thicker your sauce gets, the more concentrated your flavors are becoming. 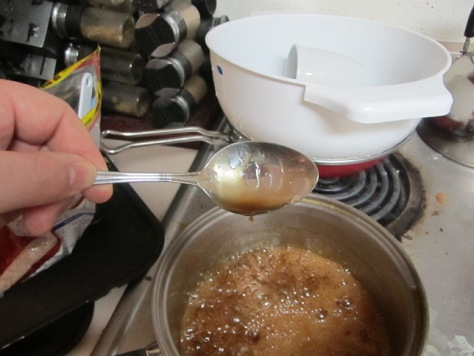 You’ll know that your syrup is ready when the consistency of it is right. You don’t want it too watery or else it will run all over the plate, however if it is too thick, then what you’ll end up with is a sticky glob of sugar that wont look appealing at all. A trick I use is to get a spoonfull of the syrup and then turn the spoon sideways. I want to see the liquid easily run off the spoon, yet cling to it as well. At this point in our lives, I think we have all used syrup on things and know how its supposed to look. Also, some people like a thinner or thicker syrup than others. Keep in mind that it will thicken up a little bit as it cools too. 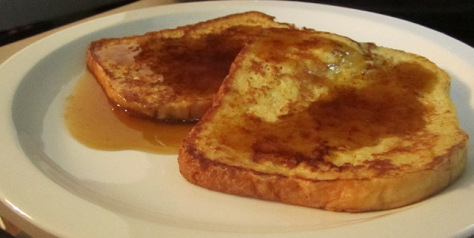 Once the syrup is the thickness you want it at, take it off the heat. You can pour it into any dish with a handle and pour spout for easy use at the breakfast table. A gravy boat would actually be the perfect vessel for your sinfully decadent ambrosia. I whipped up some quick french toast, and breakfast was ready. All in all the process was not hard, and the resulting sugary heaven was well worth any work that got put into it. In the end, our homemade orange bourbon syrup was a culinary win.