Ok. I know this was a British animated series, but that’s no excuse not to know about it. Unless you grew up under a rock in the 80’s – you should know, and LOVE Count Duckula! What? You don’t love Count Duckula? GET OFF MY PAGE!

Now that we’ve weeded out the luddites, here’s a little recap for you:

Count Duckula dies, and needs to be brought back to life with a blood ritual. Not having blood, Nanny (his nanny) uses ketchup, resulting in a vegetarian Count Duckula on the search for fame and fortune instead of the blood of … anyone. 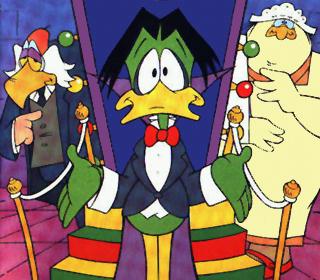 All caught up? Good. Now, there are three reasons why this should be a staple in your geekery video collection:

1. CASTLE DUCKULA – It’s a teleporting castle. Take this journey with me… A TELEPORTING CASTLE. You slip into a coffin, speak in rhymes and you get to go wherever you want IN A CASTLE. Fucking magic! (This is also a really good foundation on which to build a love of the TARDIS. Don’t know what the TARDIS is, you are on the wrong website, skippy.)

2. NANNY – Who didn’t want a nanny growing up? Who, more specifically, didn’t want an incredibly strong nanny that would burst through doors and carry you places? Shit right you did!

3. DRACULA – Ok, no, Dracula isn’t actually a part of the show, but a geeklings interest in all things awesome usually starts at a young age. Sharing the awesomeness (YES, AWESOMENESS) that is Count Duckula will prep the tiny minded babes of future nerdery for all that is awesome about Dracula – so when they grow up and become full fledged Nerds, they will be well versed in all things Nosferatu – which really gives them a one up when battling against the glittering twats that are bred from Twilight fans. (Count Duckula is a fucking vegetarian and he doesn’t sparkle … SO MUCH NERD RAGE).

I leave you with this: breed geeks, so they will know and appreciate British humor in all things, from an early age – as well as know that even a gods damned vegetarian duck vampire is more amazeballs than a sparkling one.

3 Fucks
were given in this article.