Episode 8 for season 1 of Constantine is the show’s first two parter and, to be frank, one of its strongest to date.  This one had just about everything that fans of the book would love.  It was witty and creepy and all over the map with who’s really doing what to who for what reasons.  Like “A Feast of Friends” you have to watch it twice to really pick up on the cues and clues of what might really be happening between the lines.

One of the great appeals for me with the Hellblazer book was that the main character came with a built in history, a mythology that echoed through the entire series.  There was no greater event in John’s history than what happened at Newcastle.  With “The Saint of Last Resorts – Part 1” we get to revisit the fallout from that event again in the form of Anne Marie Flynn or, rather, Sister Anne Marie, John’s former lover turned nun.

Now, again, does the show religiously stick to the back story from the books?  No it doesn’t, but what it creates is no less powerful and engaging than the books.  This story takes us to Mexico where Sister Anne Marie has taken up residence in a convent that would probably give Dracula the willies.  This time out it’s just John and Chas going to do the dirty works which means Zed is left alone at home.  This doesn’t mean that they’ve written her off for the episode.  We’ll get to see a bit of our multi-talented artist and move her storyline along (and with her story this week, the truth is, I didn’t hate her). 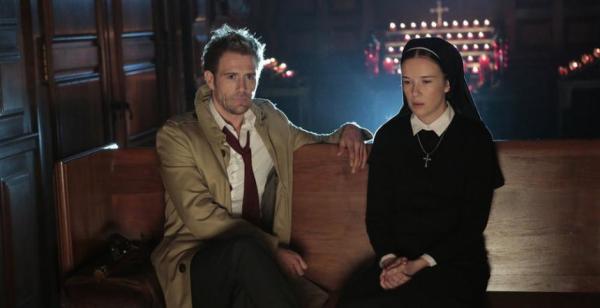 There’s a lot to digest and enjoy in this outing.  Sadly, I don’t have the space to get into all that I loved about this outing but, the bottom line is, I didn’t have any complaints.  That’s right, folks.  It’s nothing but love this week.  So let’s get to it, shall we?

From soup to nuts, John Constantine is a con artist.  We’ve seen it play out before with how he’s manipulated his “friends” and those closest to him, both between the pages of his book and on the screen.  Rarely is he without a clue as to what’s really going on and he almost never gets played.  Well, it would seem that things just changed flipped on John in a big bad way.

In my review of “A Feast of Friends” I mentioned the brilliance of watching it the first time and being affected by the ending only to watch it again and see just how Gary Lester had gotten played by John with lethal consequences.  In this outing it would seem that the tables have been turned on our hero from the very beginning.

Anne Marie (played by the wonderfully layered Claire van der Boom) is John’s former lover and, per the story, the one who brought him in to the world of the occult at the tender age of 15.  On a second viewing, however, she might have also been the one to show him the ropes on how to twist those around him to his will without them being the wiser.  A second viewing makes me think that she was playing him from the moment she showed up at the “John Cave”, dressed in white looking all vulnerable and lost in astral form.

She draws John and Chas to Mexico without mentioning the fact that she’s now a nun.  This takes John aback but he still plays the game, being all flirty and charming.  From there she plays all the right cards to retain his attention and keep him off balance.

Anne Marie shames him with what happened in Newcastle as well as him cheating on her.  She shows hints of jealousy when he flirts with another nun (who just happens to be the monster they are chasing).  She gives him the silent treatment to let him brood on their history.  She strokes his ego by saying that she understands why he can’t get close to people, portraying him as the wandering hero with a heart of gold.  Everything she does, up to and including their kiss, is designed to keep him on the hook and bring him in to the line of fire. 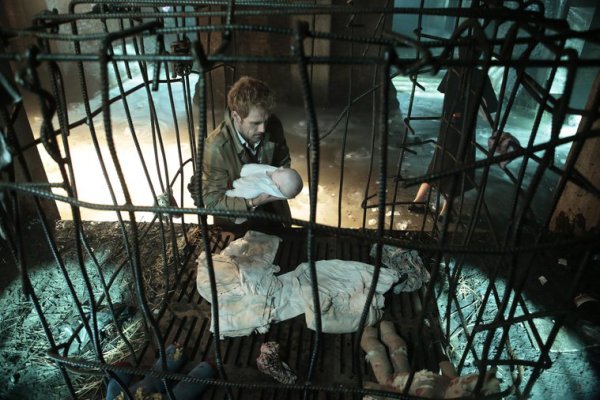 Down in the sewers, Chas tells them that they shouldn’t split up.  Then, like an episode of Scooby-Doo, Anne Marie says that they could cover more ground if they do just that.  There’s no argument.  Chas goes it alone while John and Anne Marie pair up.  She even shows a charming bit of humorous vulnerability when Chas tells her to scream if they run into trouble.  Her response, ”That won’t be a problem for me”.  In hindsight, I’m wondering if the subtle stress she put on “me“ was her way of telling us that, of the two of them, her and John, she would be the only one capable of screaming.

The babies are found.  The baddy is vanquished.  The day is saved, right?  Nope.  A bigger baddy, an Invunche, is now on the loose and bearing down on John, Anne Marie and a rescued baby.  That’s when she pulls the gun and turns John’s own words on him.  She reminds him what he said to her before she put herself out there as bait.  There is no price that shouldn’t be paid to save the innocents.  That’s when she, to use a “Walking Dead” reference, pulls a Shane.  She shoots John to let the Invunche take him so she can escape with the baby.  And that’s how we leave it.  We fade out on a wounded John slipping to the ground as a menacing looking demon lumbers towards him.

So, what exactly makes me think that this all wasn’t a happy accident?  Well, to use another Scooby-Doo-ism…

“And I would have gotten away with it if it wasn’t for those meddling kids…and mentioning the fact that I knew what happened to Gary Lester.”

That’s right, Anne Marie.  You tipped your hand.  John never mentioned ever having seen Gary since Newcastle.  In fact, based on what Gary said, no one had seen him since he disappeared.  So how exactly did she know to confront and shame John with the knowledge that something bad had befallen their old drug addled friend?  She wouldn’t unless she hadn’t been keeping tabs on John and that’s why it all looks like one long con.  I’m just curious as to how John didn’t see it coming.

Effects That Add Up 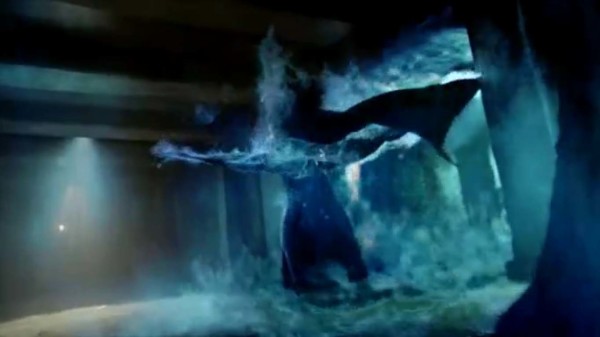 I’ll be brief with this observation and the next as I feel as I’m going to run long.  It’s not my fault as this episode was one of the best to date.  If Constantine wasn’t so damn impressive I wouldn’t be forced to run on like this, would I?

The special and practical effects used on this show continue to be a source of joy for me.  It doesn’t matter if it’s the makeup used to turn an attractive young nun into Lamashtu or the special effects used for the Invunche, Constantine continues to raise the bar with how well they execute the look of the show.  This could, however, be the reason behind the truncated 13 episode season.

In an interview with Comic Book Resources Angelica Celaya (Zed) mentions how much is spent on the CGI for the show.  It was, according to her, a lot.  That’s part of the reason I was happy to see some wonderful, low cost, practical effects used perfectly to go along with the big CGI ones.  The amazing part was how seamless they worked alongside the big computer effects.

Small or large, frugal or costly, the effects are a huge part of why Constantine looks and feels as good as it does.  It is a big part of why I keep tuning in, just to see what they do next.

A big part of the show has been the little players in the game.  This outing is another wonderful example of how a small role with the right actor can really galvanize a scene.  It doesn’t matter if it’s David A. Gregory’s “Eddie” (R.I.P. you creepy nude model guy) or Jose Pablo Cantillo’s “Hugo” or his on screen mother, “Pia”, played by Teresa Yenque, Constantine has yet to have a small role that didn’t feel as though it was being played to the cheap seats with full weight and importance.

The show continues to fill the “bit player” roles with performers who look and feel completely at home in their roles.  This is key in creating a show that feels like its own world, its own little slice of the universe that you never would have stumbled upon if you hadn’t turned on the television.  In this category, Constantine is an unmitigated success each and every week.

Which leads me to Zed. 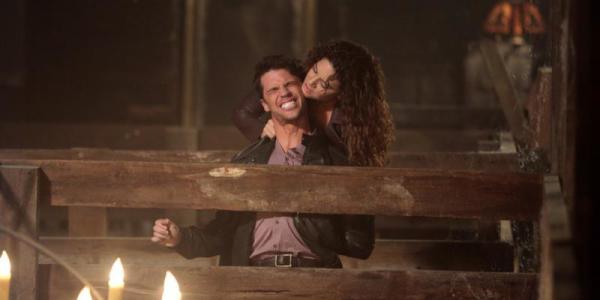 Zed: I Didn’t Hate This

I know I’ve bashed Angelica Celaya’s performance in the past.  I’ve thought that she was the weakest link in the show.  In this outing, however, she steps up her game.  Here’s the short rundown.

John tells Zed not to go snooping around the “John Cave”.  She doesn’t listen and finds a few key locations that come in to play down the line, and then she’s off to buy art supplies.  She bumps into Eddie, the two get a drink and she’s granted a brief vision of a large vault door closing in on her.  So, after seeing that, of course she invites him back to her place to follow up on that drink.

Back at the house the kissing is on followed by her putting a beating on Eddie, tying him up and letting it be known that she knows he’s up to no good.  Enter the “Resurrection Army” and exit Eddie, as the nasty duo there to collect her sacrifice Eddie to get Zed (or Mary Martin, as we learn) away from her human shield.  The chase is on with Zed using some of her newly discovered local weapons to avoid and dispatch one of her attackers.  The second one, however, catches up to her with a needle full of knock out that just so happens to go down in front of the magic mirror we saw way back in episode 1.

Now here’s the thing: Angelica Celaya was absolutely perfect during the whole kit and caboodle.  She was engaging, tough, manipulative and badass.  Zed has, apparently, learned from John and the character and the actress have truly stepped up their game.  This showing made me want to see more of Zed and what is happening with her.  I KNOW, RIGHT?  I’m only hoping that both the actress and the character aren’t hitting a real stride with only five episodes left in season 1 and possibly the series.

Which leads me too… 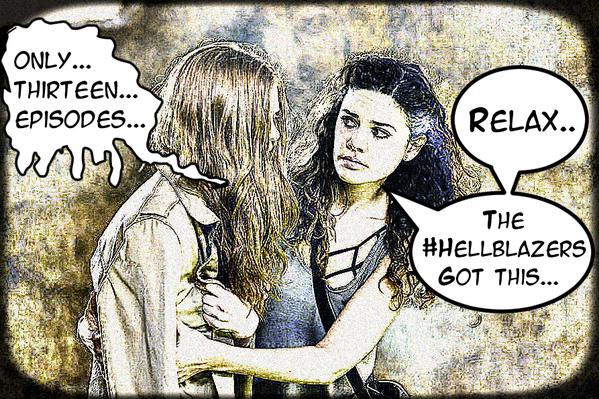 #SaveConstantine – The Battle Isn’t Over

In her interview with Comic Book Resources, Angelica Celaya said that she was only contracted through 13 episodes but she had seen scripts through a 20th episode.  She said that they were fantastic and the general vibe of her interview was that there would be more to come.  I am, however, a paranoid sort (if you’ve read my survival tips on this site you’ll know what I’m talking about) so I’m not sold.

I don’t think that we should be slacking off on the push to keep this show on the air.  If you truly love this crazy little monster then don’t go silent with your feelings.  Here’s how to continue the fight to help #SaveConstantine:

Write to NBC, keep #SaveConstantine trending, sign the petitions, tell friends and keep watching the show.  Keep telling the world how much you love Constantine and see how strong you really are.