Okay, readers, I’ll be getting in to episode 6 during this outing but there is more to be discussed and I need you to come alone on a ride with me.  Fair?  Good.  Now, grab a Silk Cut, a pint and lend me your eyes.

Raging little buggers, a deeper understanding of Manny, and the weakest link are what I’m going to be talking about.  So let’s start from the top of the order.  “Rage of Caliban” takes our hero into the scariest of places: Birmingham, Alabama.  Okay, not the scariest but it made for a great backdrop. 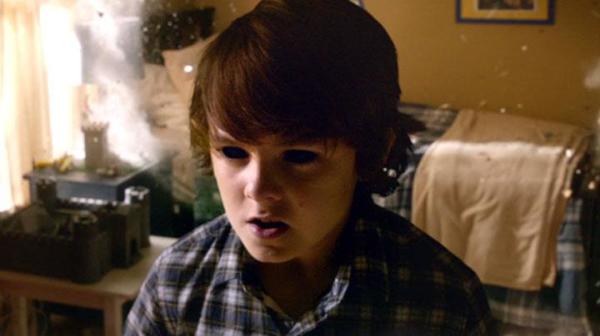 The bugger in question is the ghost/soul/essence of a wronged child jumping from only child to only child as it kills the arguing parents and leaps to another host.  I thoroughly enjoyed this outing and thought it was a great rebound after the slightly underwhelming “Danse Vaudou”.  It took another good stop further and, if they can’t use “Feast of Friends” in this capacity, it established a good blueprint for how the show should be run.

I had more than a few legitimate jumps in this one.  The crow hitting the window when the mother was heading back in to the house definitely startled me as did the haunted house scene.  This is an element that they should be playing up, though I wouldn’t overdo it.  Give the audience a good little shock from time to time to remind them that this is a world where you’re going to need to be on edge.  Sometimes that edge is just the curb but other times it is a steep and deadly drop.  Well done on that score.

This episode gave us something else to chew over that we probably should have been digesting well before now.  That is Manny and just what he is allowed to do.

Previously we knew that Manny was privy to some information that John and the audience were not aware of.  In a way, that was kind of a given.  He is, after all, an angel.  In this installment, however, he’s finally starting to put a little more light on what he is allowed to do.

Manny can’t get involved in any meaningful way other than to, basically, say “colder” and “warmer” when John is coming to a problem.  He can’t intervene and he can’t give John the answers he needs.  This is information that would have made their relationship a bit more digestible from the onset but, to be frank, it’s been more than a little confusing. 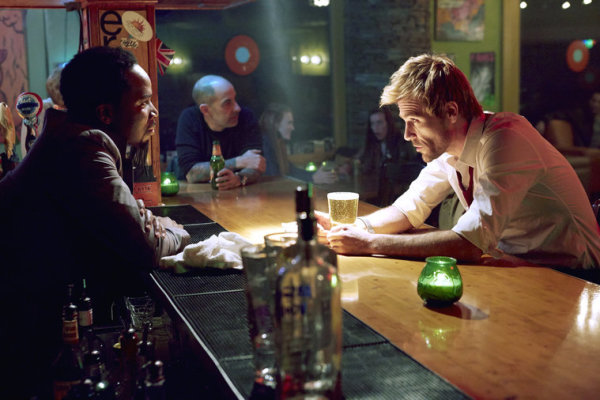 In the pilot it seemed as though he was asking for John’s help.  Then he was there as a ferryman for those about to die (“The Devil’s Vinyl”).  Then he was there to torment John (“A Feast of Friends”).  To say that their relationship has been a bit baffling would be an understatement.  Now, however, we understand that he’s there to act as a compass for the path that John needs to be on…or do we?  With his ever changing role in the dynamic of John’s war on the rising darkness I’m left to wonder if he’s part of the solution or the origin of the problems.  Chew this over and let me know what you think.

NOW, let’s discuss the weakest link, shall we?

One word.  It’s a name.  Three letters.  The first one is Z and the last one is D.  I’ll let you fill in the blanks.  Let me know what you’re rea…oh, you’re ready that fast?  Well done.

Zed, as a character in the books is fascinating.  As she’s portrayed on the show, well, not so much.  As a plot device she’s useful as John can’t be in two places at once (as seen in “Danse Vaudou”) and doesn’t have the “bag of tricks” that she does.  Now granted her bag is loosely defined and seems to change from week to week but it’s still a bag that we know that John doesn’t have so, again, as a plot device she’s kind of necessary.  But let’s look at the lack of Zed in this episode and you can tell me whether or not she’s really all that necessary. 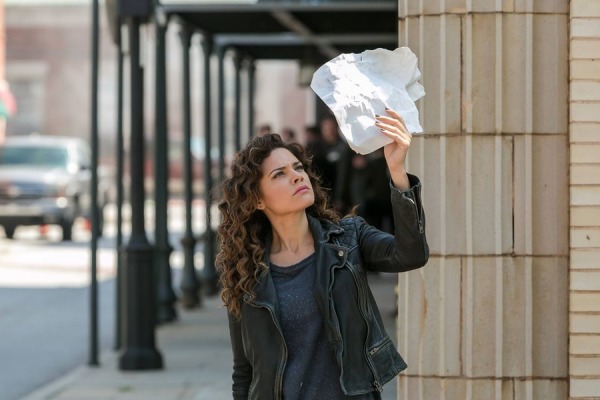 Our hero was able to sort things out on his own.  He needed few gimmicks if any, and got by with only what he has needed for the longest time in the stories – his wits.  Zed as a character might have a great back story but as far as a character that really brings something to the table I would say she’s certainly lacking.  To date she’s been a convenient dues ex machine and a way of forcing John to explain things to the audience.  It was necessary in the beginning but as the audience gets more comfortable with John and what he does I think it might be useful to simply let her stay at “art class” for the rest of the season.  Let her go the way of Chuck Cunningham; let her go upstairs and never come back down.  Either that or find some way of making her compelling in some way, any way at this point would be appreciated.

Okay, review/recap/babbling out of the way, now I need you to hunker down and really pay attention.  Don’t make me slap that bottle of Yoohoo out of your hand, I really need you to hear me out.

I was wrong.  In a previous installment I had said it seemed as though the show had got “the back nine” on the season.  I was wrong.  NBC has stopped production and has left it to the numbers to show whether there will be a second season.

Now, what “numbers” are they looking at?  They are using the old fashioned “Nielsen ratings”, so if you’ve got one of those old timey boxes in your house and are a Nielson family then, please, listen to my impassioned plea.  KEEP THIS SHOW GOING!  Then again, if you’re a Nielsen family there’s a chance that you’re still using dialup and/or are possibly frightened by the concept of them fancy computer boxes, in which case I will applaud your grand or great-grandchildren for finding the Nerdery Public…they have good taste. 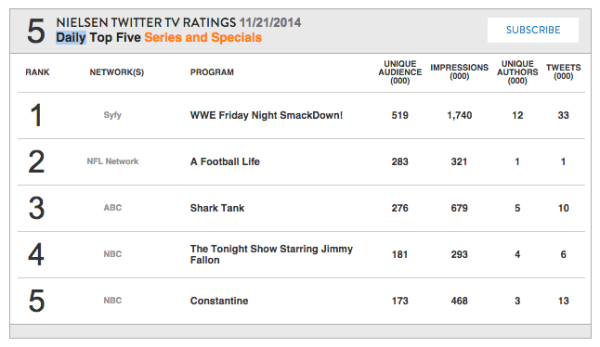 What does this mean for the rest of us?  It means, if we really love this show, we need to talk to NBC and tell them we want a season two.  We want this weird little animal to live and not be put down before it can sprout its wings and truly float upon the wind.

The hashtag (and for the record, I hate hashtags…the only one I’ve every truly been behind has been #doktorschadenfreudesvaginatrendingworldwide…and I’m proud of that one) #SaveConstantine started running pretty heavy.  There’s an online petition to that’s building steam.  There’s even a great photo of Matt Ryan (our John Constantine) floating around the interwebs with him holding a #SaveConstantine sign (Photoshop or not, I liked it).  You can be part of all of these and don’t shy away from doing just that.

Have there been more than a few arguments as to why it should be allowed to die?  Yeah and not a one of them holds any weight.

“It never should have been on NBC in the first place.”

And?  It is now and if you want to keep the show alive then who gives a shit about what network has it.  I hate to be the one to break it to you but, with Netflix deal with Disney, I don’t see them being the ones to swoop in and save a rival company’s product.  Amazon Prime and Hulu are in second place to Netflix and I doubt that either of them is going to be the answer to the question.  NBC is the beast we have to tame and steer so let’s focus on that.

“Well, it’s not like they were actually doing a real Hellblazer show.”

Hellblazer was never designed as a show and even networks like HBO and Showtime would have shied away at a page for page remake of the books.  Let’s not forget that this is a book with some messy, dark, insane shit going on it.  We were only ever going to get a scrubbed version of it from the beginning and you can’t tell me that with the parameters they had to work with they haven’t done a stunning job.  Like Captain Murdock said in “Airplane!”, carrying Walton and Laimbeer up and down the court every night isn’t easy.  Constantine has had a harder job carrying Standards, Practices, Censors and, yes, Nay-Saying-Fanboys up and down the court every Friday night at 10:00 PM.  Yet despite the constraints they have had to work with they have delivered a consistently engaging product in every episode.

“They should have done a better show.”

Well, you didn’t watch so I really don’t give a shit what you have to say.  If you did watch and didn’t find something of interest in it for you then you probably weren’t a fan in the first place or you’re one of those myopic purists who isn’t willing to make the conversion of medias in their head.  You’re probably too busy to watch as there are still so many things you’re complaining about with the Lord of the Rings trilogy (“How does he not have the sword by this point?!  It’s how they know he’s gonna be king!  These movies suck!”) or The Crow (“Those characters don’t even exist in the books!  Where’s Captain Hook?  This movie sucks!”).  Either way you suck and I’m not looking for your help.  I’m looking for believers, not the critics who point out who the doer of deeds could have done better when they’ve never stepped into the arena themselves.

The more I watch this show the more I fall in love with what the team behind it all has put together.  Despite the conflicts and the conversions and all the other issues in their way they have managed to put together something that is pretty damn wonderful.  If you don’t believe me then do me a favor, go back and actually watch.  Look at all the tiny details that they have put together.  There’s a weekly Easter Egg hunt on the internet for all the minutia that has been packed into each of these episodes.  There are theories and debates raging about what is coming and what they’ll do next.  People do care about this and there are reasons why.  You just have to open your eyes are see them. 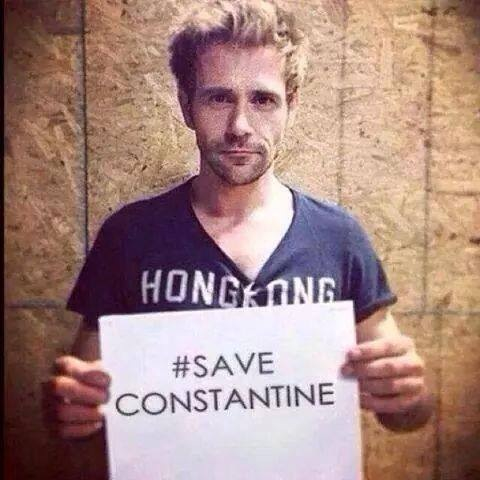 I’ll be honest with you, I didn’t see the original run of “Firefly”.  I caught an episode or two but it kept getting moved around I missed out.  I found it afterwards through Bella and The Doktor. They were the ones who really clued me in to it.  When I saw the whole run I found myself screaming “WHY IS THIS GONE!?!?”  Since then I have fallen in love with many a doomed vessel.

Too many stories left untold.  I don’t want this to be something that comes to pass with Constantine.  And here’s the thing, it doesn’t have to go down like that.  You have the power to do something about it.  You are that powerful with your voice.  Let NBC know that you want more.  Speak your mind and #SaveConstantine.  Thank you.