“And I threw up my hands and I said ‘AMEN’ and I prayed sweet Jesus don’t let me become a backslider!  Backslider!  BACKSLIDER!”

Part of me wants to mail the show runners a copy of the Toadies “Rubberneck” with the above referenced song highlighted, underlined and circled.

Episode number 5 of Constantine just wrapped up and, I hate to say this, but on the heels of last week’s episode (“A Feast of Friends”) it feels as though the show has taken a step back.  I’m not saying it was bad, it just left me questioning whether the previously mentioned episode was an anomaly and not a turn in form with the show.

With that in mind, let’s look at this installment of constant, “Danse Vaudou”.

There were some nice twists that came to pass in this episode and I was left with more than a few questions.  In particular, what exactly is Chas?

Chas Chandler, John’s oldest and longest suffering friend, has been a lot of things in the books but at no point was he ever portrayed as a nigh-invulnerable, healing-factor having knife fighter.  Now, the knife fighting I actually get, he’s a cab driver after all, but the rest of it is a pretty fresh take on the character.  A fresh take that I hope we’re getting close to learning more about.

If you weren’t counting at home, so far Chas has been impaled by an electrical cable, drove his car headlong into an electrical transformer and, in this episode, gets slashed and kidney/liver stabbed to death by a ghost model.  According to the show runners though, he’s not immortal.  Just the next best thing, I guess. 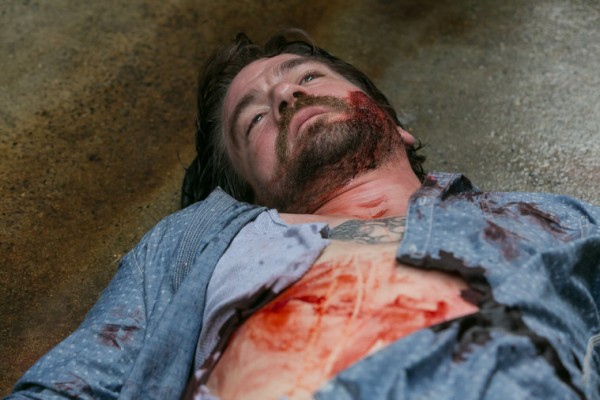 I’m not complaining about this, in fact, I feel like the show took a step forward with the fact that Chas was actually on screen for more than just backup.  Maybe it has something to do with getting his cab fixed.  Either way, I enjoyed how he was used in this installment.

I’m not going to glow about John or Papa Midnite again because we all know that it’s just going to turn into pages and pages of fanboy crush.  Nope, instead, the next dollop of praise I’m going to bestow is on, of all folks, Zed.  Well, praise and one little potshot.

My complaint so far with the character has been that I didn’t feel as though Angelica Celaya really “got it”.  Where the disconnect came I wasn’t sure but it seems with this episode, they’re starting to get things ironed out…with a hitch.

Zed is someone who, by her own admission, was almost as bad as John when it came to the lengths she would go to survive.  We’ve never really seen that in play though.  To date she’s wandered through most of the episodes as a neophyte who just happens to have some answers.  She’s sincere and sweet, too sweet to be the character that she portrayed she was too John.

This time around we see some of the tools of her trade that most likely helped her survive out in the wilds before she ran across our hero.  She was manipulative when it came to dealing with the cops, she showed an armored sense of self-preservation when it came to hiding secrets from John, and she showed a poker face when it came to hiding what she saw with Jim Corrigan at the end of the episode (more on that later).  I’m finally getting the sense that this girls isn’t too sweet for rock n’ roll.  Hold your horses though – she might pass for RnR but we’re dealing with punk rock and she’s still way too sugary for that.

Here’s my one dig and this is with the character and not the performance.  This trip to New Orleans is on the backside of the Gary Lester incident.  As we saw in that episode Zed got her first real taste for what John is all about.  We closed that chapter with her angry, distrustful and screaming at him.  We open this episode with, well, a return to form, as if it never happened.  So, what that tells me is either:

Neither option moves the character forward on the board for me.  This is a series that should show cumulative effects (as we’ll discuss shortly) and, as far as Zed’s character goes, I’m not seeing it. 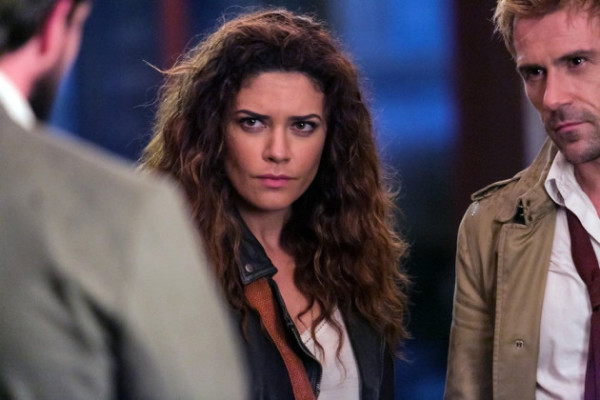 NOW!  Let’s get into some fun bits and bobs, shall we?

Back in my review of the Pilot episode I mentioned the appearance of the helmet of Dr. Fate.  I believe the comment I made was that the helmet was a gun and the show doesn’t have what it takes to pull the trigger.  Well, they cocked the hammer tonight, again, and they cocked it with The Spectre.

I’ll be the first to admit that I’m not an expert on the character but I know this much, he’s the embodiment of Avenging Wrath for the Murdered Dead (thanks Wikipedia…just kidding…okay only partially kidding).  He’s also got an alter ego, that of New Orleans homicide detective Jim Corrigan.  We get to meet Corrigan, played to haggard perfection by Emmett Scanlan, in this episode and there wasn’t much about him that didn’t feel just about perfect.

It’s through Corrigan that we learn that, during his time with the Missing Persons Division, he had come across Zed’s photo.  “Your…family,” he says with pause, had been looking for her.  His pause is what sells the moment and tells us in high volume that those who are looking for her are just off enough to give a NO/LA Homicide Detective pause.  (Side Note: I’ve worked alongside NO/LA PD Homicide…there isn’t a lot that gives those guys pause.)

It’s when Zed thanks Corrigan by allowing him to kiss her hand that we get the next big reveal.  We see through her eyes as the handsome detective is transformed into a bloody mess with a bullet pocked chest, a bloody red mask and an ethereal green mist floating around him.  In other words, Zed now knows that he will become…something. Something we know is The Spectre.

This is both exciting and vexing at the same time.  It’s exciting for having an ally like that on our hero’s side and vexing because HOW ARE YOU NOT CROSSING OVER WITH THIS SHOW INTO THE DC CINEMATIC UNIVERSE!?!?! 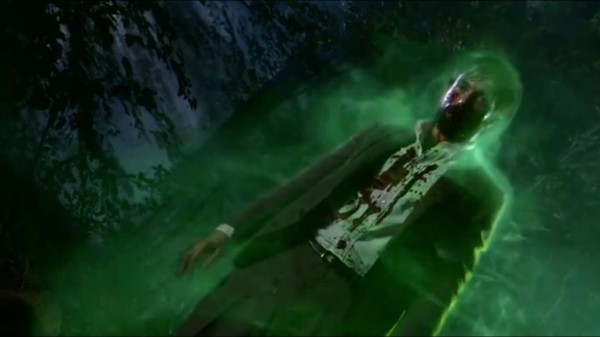 So, I’m getting ready to write this column for the Almighty NP and haphazardly scrolling through my Facebook feed when the comicbook.com headline shoots up in front of me.

My first reaction was, “What the fuck?!  Did the fine folks at comicbook.com finally watch the show for the first time?  He’s been sneaky-sneaky smoking in just about every episode!”  Truth to tell, I’m still not sure this isn’t the fact based on how shocked they seemed in the article.

But, let’s forget that for a moment…seriously, did you not catch that whole walk he took in the second episode where he’s got a cigarette hanging out of his mouth and smoke coming from his person…NO, no, forgetting it.

The article goes on to flash a tweet from show producer Daniel Cerone.  The tweet says, “We told you John smokes on our show.  How can we do Dangerous Habits if he didn’t?  Trust.  Believe.  #Constantine”

So, why were people so shocked by the smoking?  I think the folks at comicbook.com got that one right when they pointed out that NBC Standards & Practices would have a serious problem with this.  Frankly, and I’m pretty sure I said this before, I’m shocked they got away with it.  I don’t care who you are, no amount of tweeted trust, belief or hashtagging is going to get standards & practices to relax their ass cracks.  That is, at the end of the day, what they get paid for.

“Television must be clean and pretty and free of affecting anyone who sees it any way.  We can’t have little idiot children thinking that smoking is cool, no matter what the idiot cool kids in school, the idiot people on the street and their idiot chain smoking parents show them at home as they suck down a pack of butts a day.  Just don’t do it idiot kids.”

Thanks, Standards & Practices.  (Didn’t I say I wasn’t going to get on a soapbox about this subject at some point?  Well, I lied.  Accept it for what it is and move on.)

And this is where my fear comes calling. 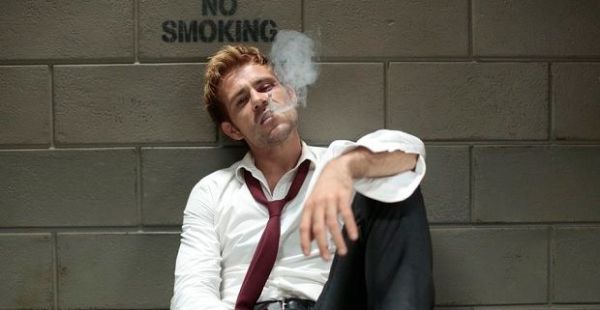 “Dangerous Habits” is a fantastic story and, at its heart, one of the quintessential Hellblazer stories.  It gets to the heart of who John is as a character.  He’s a bastard but he’s a bastard with a heart of…well, a heart.  He finds out he’s got lung cancer, tries to save his own life a couple of different ways, ends up saving his friend’s soul instead, pisses of the First of the Fallen (oh look, here he comes…and after we’ve been teasing him for a few episodes now), puts Hell into a nasty checkmate/civil war situation and walks out the door laughing, cured and smoking another butt.  Yep, our puckish hero goes right back to smoking and has really learned nothing.  Wink Wink.

Why do I feel as though NBC Standards & Practices isn’t going to let the show get away with that? I can just see Goyer and Cerone running the idea passed S&P and as their wrapping up their run through S&P just look at one another like Bugs Bunny and Daffy Duck with that skeptical, narrowed askew glance before one holds up a sign with a screw and a ball on it and the other holds up one with a horse and a pile of poo on it.  And then they shoot themselves because this is my fantasy and, really, I’m not sure anything would make me happier than having that happen.

Here’s the reality, there’s only one way that a network is going to do “Dangerous Habits”.  It ends with John repentant for being a bad smoker and giving up the habit.  I’m pretty sure if they could work in a nod to the camera with him pointing and winking at all of the nation’s youth before saying, “Don’t smoke, kids”, they would do that too.

Do me a favor, fine folks over at Constantine, pick another path.  Shit, you just got your best reviewed episode to date in “A Feast of Friends” last week.  Keep telling personal stories.  Nail down the rest of “Original Sins”.  Hell, do the “Son of Man” story arc before you do “Dangerous Habits”…that one involved murder by sodomy in it, something that would be far less button pushing than smoking.  Thank you for your time, now please keep up the good work.

So, on the whole, last week’s show was a big step forward.  I consider us lucky that this week’s episode was not two steps back.  As it was, it was just a slight shuffle step to the rear.  Let’s just hope that with all of this forward and back the show doesn’t trip over its own feet and come crashing down.