Okay, I needed to get that out of my system.

The season finale (unlike most folks I’m not going to throw in (series?) because I have FAITH damn it) has come and gone.  It served almost as a greatest hits package for what we’ve come to expect from what one writer called “the little series that could”.  You really did have it all…well, except Chas for some unknown reason.

Creepy environments.  Chilling music.  Fantastic and upsetting side characters.  Did Jim Corrigan just kill a guy in cold blood?  And, oh my, what a swerve to go out on.

As I didn’t see much not to like about this episode (except for no Chas…I’m not sure I can stress this enough) I’m just going to jump into the damn fine we were given.

This Is Me Eating My Words 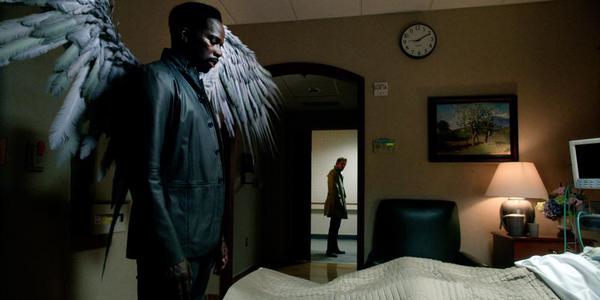 So, if you read my last little rant on Constantine you probably noticed that I laid out a “who should stay and who should go” set of ideas for the series moving forward.  I now have to eat my words and say that, without question, Harold Perrineau simply must, CAPITAL M MUST, stick around.  My big complaint was that the character had run his course and should pack it in.  Oh how wrong I was.

I may have called this one way back in the beginning of the series when I said that our angel Manny might, in fact, be in bed with or the big bad himself, The First Of The Fallen.  Then I forgot about it all.  I bought into the veil that the show put on our angelic friend.  We saw him shocked by another angel gone bad.  We saw him vulnerable as a human.  We got to think that he really was working with our boy John with the best of intentions.  Then, with the closing seconds of the show, WHAM!  I got hit right in the face with the reality of what I had called way back in the beginning.

Papa Midnite (the always wonderful Michael James Shaw) is going to jail in Louisiana.  Having seen the inside of a Big Easy jail before I can understand his concern (long story).  Then time stops, the car door opens and Midnite steps out into the night only to be met by, you guessed it, Manny.  Our winged Judas tells Papa that the hit on Constantine has been cancelled.  Papa is shocked and asks if he’s working for the Brujeria.  Manny laughs.  “The Brujeria work for me.”  And with that he flies off into the night and the close of the season.

And with that, folks, it’s a whole new ball game; a game that I’m hoping we get to watch some time very, very, very soon.

They Went Out In A Cloud Of Smoke 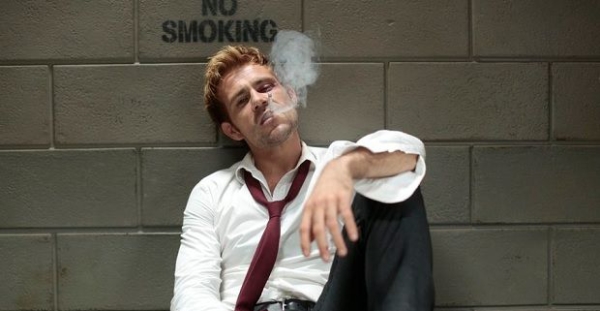 Either the show runners knew that they weren’t getting the back nine when they shot this or they just felt like starting the early seeds for “Dangerous Habits”.  No matter what the reason was, they let John smoke like a chimney in this episode and it felt so damn right.  There really weren’t that many scenes where Johnny boy didn’t have a cig hanging from the tip of his lip.  Now here’s the thing, it made the character feel a lot more like the guy I had been reading all of these years.

I’m going to get on a small soapbox real quick.  The character smokes.  You, NBC, knew that they were going to try and set up “Dangerous Habits” at some point.  You should have been letting him do his thing the whole time.  There, soapbox finished.

Now, going forward, John’s smoking (and drinking and drug use and the blood and guts) might be part of the nail that NBC puts in the show’s coffin.  “The show didn’t live up to the moral high ground we here at NBC like to take when it comes to smoking.”  Wait…didn’t you guys have a show that was set almost entirely in a Boston bar (I loved “Cheers” but come on)?  Get over yourself.  The character is a chain smoker and it was a joy to see him actually do what came natural to him tonight.

The crew that floats around Constantine has, through this first season, added so many wonderful flavors to the overall taste of the show.  There are no better examples of this than Papa Midnite, Jim Corrigan (Emmet J. Scanlan) and Gary Lester (Jonjo O’Neill).  I know it would fly in the face of the “arc” plan I laid out in the previous entry but having those three join the case in a more permanent manner would really be amazing.

Scanlan continues to surprise me with his take on Corrigan.  I always took the man behind the Spectre as being a little more out there in life.  Instead we get a Corrigan who’s very much the rough, tough New Orleans cop who probably doesn’t have much of a problem shooting a man in the back.  I have to say that, when Corrigan whispers to The Man, “Run”…I got the willies.  There was something so very menacing to him in that moment.  Then, flipping things on their head, we get to see him enjoying a drink with Zed in a NO/LA bar where he’s emotionally accessible and oh so very charming.  Do me a favor and keep this guy around. 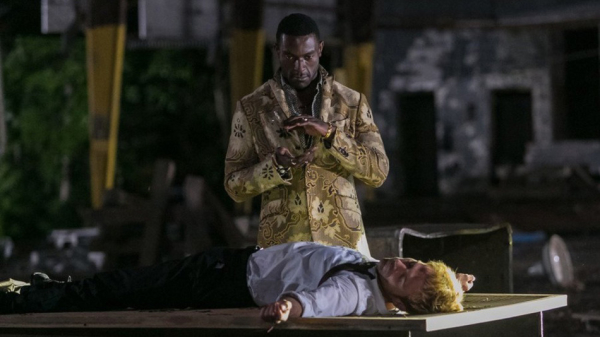 I’ve already gushed about Shaw/Midnite in previous entries but let me just dribble a little more in your ear.  Seeing Papa Midnite as not just a guy who can pull the strings from afar but doesn’t mind getting his hands dirty was fantastic.  He sends a zombie.  Then he sends a crow.  Then he splatters (who he thinks is) John’s brains all over his own face with a rifle.  He’s stoic and iron-willed the whole time.  But there’s more under the surface.

If he was hunting our boy as a moustache twirling villain out to collect the bounty on John’s head that would be one thing but with the added incentive that he’s trying to save his sister’s soul from hell he has become a player you really can’t hate.  This might be why he doesn’t blink when blasting away at John’s face and I didn’t feel that bad.  It was all in the name of redemption for him and for his dead sister.  As much as I was nervous that our hero might have found a situation he couldn’t talk his way out of it, I felt for the guy pulling the trigger.  You get that when you have a good actor behind the wheel, humanizing an otherwise bad dude.

And, lastly, Gary.  It was just his voice but having Gaz back for just a moment reminded me of the best episode that the show put on.  It was nice having his ghostly voice speaking from beyond the grave, if only for a moment. 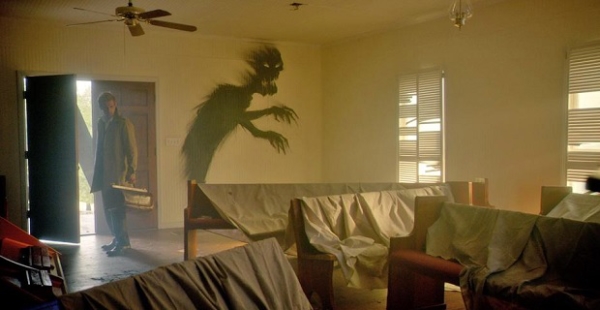 The show was true to his roots with jumps and scares around just about every turn.  Zombies, ghosts and satanic Cajuns, oh my.  It didn’t shy away from the blood or the pain in this outing and, I can only hope that when it lands its second season on SyFy, there’s more of the same.  It was really nice to see something really frightening on television that didn’t require Netflix, HBO of FX.  This show is in the horror business and it should never pretend to be anything other than that.

The one downside to this episode that I can find is that it might be the last one we see for quite a while.  With the future uncertain we can now only sit back and wait for the men in suits to figure out where we go from here.  Will it get cancelled?  Will it get a second chance on SyFy?  Will a dark horse arise and take on the show?  We don’t know BUT we can still have a voice on the matter.  Contact NBC, post about the show on your chosen social network platform (I’m blowing up Myspace with all sorts of pleas for a second season…that should help, right?), do the whole #SaveConstantine thing and tell folks how much you’ve enjoyed it…and that you want more…so much more.

In closing, it has been a blast reviewing and blabbering about this show for the Nerdery Public.  I want to thank them for giving me a chance to ramble on as I do.  Due to the order barring me from most town squares in my immediate vicinity, it’s been nice to have a home to do this in.

I also want to thank the cast and crew of Constantine for all of their hard work.  They had an uphill battle from day one with the subject matter and the overall theme of the show.  With all of that which they had to face they still managed to consistently turn in a product that always a joy to watch.  Thank you for giving me a reason to stay in on Friday nights and then jump up with excitement on Saturday morning so that I could watch it all over again to write about it.  You did the character and those who dreamed up the stories proud.

Lastly, thank you to those of you who have been reading this and passing it on to others.  I know I tend to ramble and get off track but if you’ve taken the time to read all of these post, I do humbly appreciate all of it.  I’m hoping that we can pick this up for season 2 in the very near future.

My name is Darwin Law and I write for The Nerdery Public.  And I want to see #ConstantineSeason2.