Something you have to take into account when you move from one medium to another is that you’re going to have to allow for differences.  Some of those can be monumental while others can be miniscule.  Example: Everyone here is probably familiar with James O’Barr’s “The Crow”, right?  I’m going to go out on a limb and say that you are.  If you watch the first movie (and ONLY the first movie…don’t go down that horrible road) and read the book, aside from the crow, you’d almost think that you were looking at two very drastically different stories.

(And it could have been worse, the original plan for the movie was to make it into a musical.  Let that roll around your brain for a minute and try not to puke.)

Now, I love the book and I really love the movie (“The Crow”…not “Constantine”…that shit made me want to spit nickels…at Keanu Reeves scrotum) but how can that be possible with them being all but night and day when it comes to the big strokes and the little strokes?  Quite easily.  When you change mediums you have to be ready for change.  Sometimes it’s a good thing and sometimes it ain’t.  With episode 10 of Constantine, “Quid Pro Quo”, it’s a good thing.

Chas, in the comic books, is a relatively easy nut to crack in some sense.  He stays pretty loyal to his best mate despite the horrible shit that happens to both of them over the course of the series.  For the most part, though, he’s just there to give John a ride and play Watson to John’s Sherlock.  There isn’t much of a threat to him turning into the Hulk or pulling some amazing magical shit out of his ass to save the day.  He gives John someone to talk to and a wall to bounce shit off of.  He has all the makings of a good sidekick.  That’s fine for comics but not so much for TV. 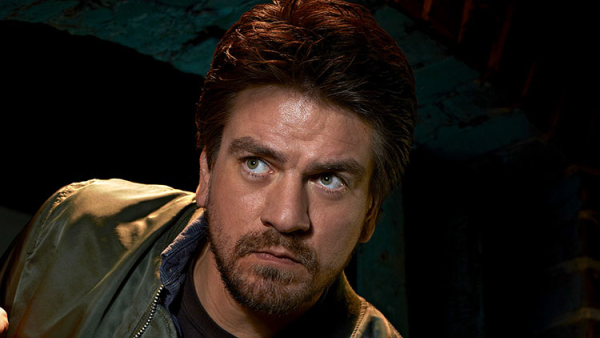 Chas, in the TV show, is a much different animal.  He’s still a standup guy but the show takes it to another place all together.  His loyalty is much less grey.  John, in a drunken stupor, puts a protection glamour on him right before a nightclub fire that kill off 40 plus people and Chas.  The man dies but the spell holds true and Chas is brought back along with the lives of all of those who died in the fire.  John saved him and gave him, in short, 9 cats worth of lives.  Now burdened with the knowledge that he’s carrying around 45 lives and knowing he can make a difference, he stands by John’s side sacrificing himself when he can to save the day.  He does the right thing, no matter the cost to himself or, as we find out, his family.

My only qualm with how this whole situation is laid out is that they waited until episode 10 to do it.  We’ve seen Chas “die” several times over the course of the show so far and there’s never been any sort of nod to what the fuck was going on.  This should have been done a hell of a lot sooner.  It would have given the audience a reason to root for the guy and would have solidified his status as John’s conscience.  Along with all of that it would have given weight to the choice Chas made to follow John and why he was so willing to throw himself in harm’s way no matter the cost.  And with Chas, the cost has been very high.

Not only does he constantly lose a life in pursuit of saving lives, he’s lost his family.  Following John Constantine was the choice he made over being with his wife, Renee (played by Amanda Clayton) and daughter, Geraldine (played by Alexa Nisenson).  Synopsis aside, both parts were played quite well and Nisenson was just damn adorable as Chas’s daughter.  Again, the show does a great job of filling smaller roles with some very talented actors and not just with the side characters.  You only have to look to the heavy in this outing to see what I’m talking about.  And I’m talking about the creepy as hell Mark Margolis as the villainous Felix Faust.

Now, again, this is a spot where you have to allow for the jump in mediums.  In the books Faust is a heavyweight.  On the show, well, according to John, Faust is a second fiddle to bigger baddies.  Like the books he’s hungry for magical power but now with the rising darkness he’s managed to acquire enough power on his own to start stealing souls in Brooklyn, New York.  This premise could almost be laughable (not because people in Brooklyn don’t have souls…well, some of the hipsters are pretty empty inside) if not given the right amount of weight and creepiness.  Mark Margolis has both of those in spades. 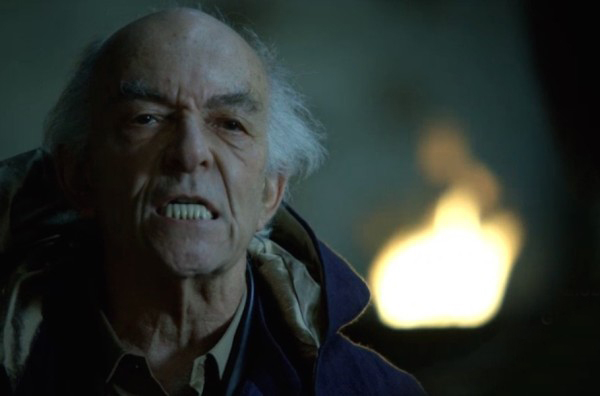 I don’t care where you’ve seen Margolis before, the reality is that you’ve seen him somewhere before.  His list of credits goes back to 1976 (he’s been doing this as long as I’ve been alive if not a lot longer…I’m just going by IMDB credits) and he’s popped up in some of my favorite shows and movies over the years.  He may have done some stinkers but I have no doubt that they were made less offensive just by his presence.  He does the same for Constantine.

What could have been a mustache twirling villain (the worst of them all) is actually given some real purpose with Margolis’ portrayal.  He’s a guy who’s been slighted over the years and that really plays with how, now that he’s on the winning side of things, he lords it over John that he is no one’s sidekick anymore.  You don’t trust him, you don’t like him, and you shouldn’t.  There isn’t a moment you should like being in this guy’s presence and it shows.  My only wish is that he could have been more than a “one and done” style character.  But who knows, should a second season happen (FINGERS CROSSED), Faust has come back from worse than being blown up by a grenade.

On the whole, this was another strong outing for the show.  The only problem that it seems to be suffering from at this point is that there are so many balls in the air that when you are reminded of an existing issue you almost have to take a step back and say, “Oh yeah, that’s still out there, isn’t it”.  If you need a reminder of this you need only look to the last few moments of the show.

John is with Zed in the hospital.  She tried using a psychic ability to talk to Chas’s comatose daughter and got mentally zapped.  John’s lying next to her in the hospital bed as she starts to drift off when she mentions that she spoke with his dead mother.

“Oh yeah, his mom is dead and John really wants to talk to her.”

So, to recap for those who might have lost track of their score card of bad shit out heroes are dealing with:

That’s a lot of stuff to juggle and I almost feel like I’m leaving something out.  “Lost” didn’t manage to compile that many issues in their first ten episodes and they were just throwing weird shit at the walls to see if it stuck.  There are a ton of mountains for the trio of Constantine, Chas and Zed to climb and we still need to make sure that a second season happens.  So let’s talk about that for a moment or two.

As you can see, I’m getting this and the episode 9 reviews in on the late side.  It’s not that I’m not motivated or that I didn’t watch them (I did have jury duty that kind of got in the way of my normal schedule but that wasn’t that big of an obstacle).  I just got lazy and lost the rhythm.  That’s the problem with a “winter hiatus”.  The bigger problem for the show is that it won’t have fourteen episodes to come back to like a lot of other ones.  They’ve got three more and then it’s in NBC’s hands.

If you’re reading this (both of you) and you love the show, you need to make sure that your voices are heard.  Watch the show.  Tell a friend.  Email NBC.  Use the hashtag #SaveConstantine.  Keep the conversation going and don’t let it fade away.  And, should things go south, get Netflix on speed dial and tell them to pick this one up as soon as possible.