There is going to be no surprise in this statement: IF the zombie apocalypse DOES arise, I’m going to throw kids to the wolves… zombies… pretty fucking furiously. This isn’t just because kids are egotistical little psychopaths, but also because they are resilient as shit and will probably survive longer than most of us adults – and I want a good head start. What am I going to do if kids ARE the zombies? Well. This is the most horrifying prospect ever. And, as horrifying as it is, Cooties manages to make light of it with some grade-school humor and grade-A gross. 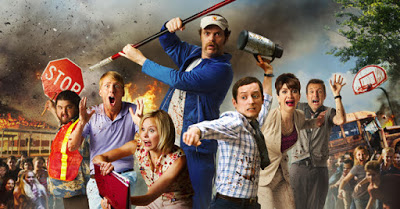 Cooties opens with a chicken-nugget preparation and infection montage that is one of only three scenes I’ve experienced in my life that nauseated me. So, +5 there. As the infected nugget makes its way to a school and down the throat of a young, pig-tailed girl, Cooties turns its attention on Clint. A wannabe writer returned home to teach summer school at his old elementary alma mater, Clint is just one of the very familiar movie teacher tropes we are all pretty familiar with. Along for the ride as the children become the ravenous undead is the overbearing gym teacher, the mousy female teacher, and the creepy health teacher.

This ragtag team of teachers must fight their way to safety within, and outside, of the school as their tiny terrors nom on classmates and substitutes alike. As if being a teacher, especially during summer school, wasn’t difficult enough, right? The reliance on the teachers’ knowledge is especially useful in some of their survival – but Cooties does like to remind you that teachers are people too, and sometimes they just don’t know what to do, which makes for a couple of ridiculous screw ups that are equally gross and goofy. 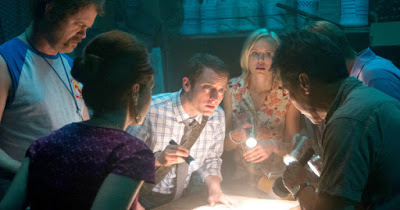 Is this what teachers do during their planning period?

Combining the aforementioned grade-school humor with the glib reality of a teacher’s life makes for an interesting conundrum as the survivors of Cooties are the adults, trying desperately not to destroy the children who they teach – and who now want to eat them. Constantly keeping in mind that these are “children” zombies, the gore and violence is swift and usually quick cut away, so as to keep the audience slightly confused. Are they not killing kids, or are they not killing the undead hoards of tiny-folk that want to gobble them up? It’s a fun little ride.

Characters aren’t particularly well developed in Cooties, but they have been well formulated which always makes for some fun poking at stereotypes. The biggest, of course, being that children are awful. Because they are. Of course, when you rely heavily on a plot foundation of undead children and grade-school humor, you also corner yourself into a grade-school level of smart. Which actually isn’t too terrible for this movie. Sometimes you just need something silly and stupid to entertain you, and Cooties does do that. 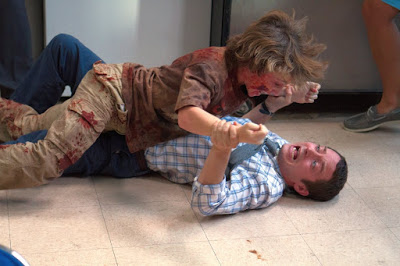 Why isn’t anyone killing this dead kid?!

Keeping one foot firmly planted in the zombie genre and the other foot rooted in the teacher-comedy genre, Cooties manages to realize most of its potential. Unfortunately, most of its potential is mildly scary, mildly hilarious, and mildly gross (insert a hysterically gross poop joke here). If you’re going to do something fair-to-middling, at least do it well.

Cooties gets almost straight A’s from me for playing everything safely and still being entertaining. It does, however, get a D from me for attempting to hinder my love of the chicken nugget.

Chicken nuggets, the downfall of civilization. WHY C-NUGGS? WHY?!