If you had told me 10 years ago that I would be the resident admin tramp for a gorgeous group of girls that find humor in everything, set their humor to song and dance and strip down to pasties and panties, I probably would have laughed at you from behind my computer monitor. No, I don’t run with a group of hookers or strippers or whores (though, they may play ones on stage); I run with a group of Burlesque performers known as Effie’s Club Follies.

Not familiar with Burlesque? Burlesque is a literary, dramatic or musical work intended to cause laughter by caricaturing the manner or spirit of serious works, or by ludicrous treatment of their subjects (wikipedia). For example: Love Star Wars? You’d love a number wherein Han and Chewy are about to rescue Leia when they find they are more interested in experiencing one another than Jabba’s new buxom slave. Clothes are removed, hairballs are faked, hilarity ensues and Leia is left chained up, still waiting for her rescue as Han and Chewy exit stage left becoming ever more intimate with each other.

Burlesque is definitely fun, and geeky Burlesque? Well, that’s even more fun! Picking and poking at geek culture and your childhood, these girls (and some boys) pull off bawdy humor and hand made costumes with such fervor that will make your taped up glasses fog over with excitement. And, while Burlesque as a primary form of entertainment may have slipped into the background after the 1940’s, there is still a place for it. (NO – I am not going to talk about the movie Burlesque – because what I gather, that was NOT about Burlesque, more about Showgirls, and there was already a movie about that).

Now, while I don’t perform, I can say that it is still incredibly empowering, as a woman, to be in the company of such confident women and proud geeks – who unabashedly take their clothes off for you to laugh at them. With the geek community almost always in an uproar about misogyny in the culture and heated arguments over “real” vs. “fake” geek [girls], geeky Burlesque is a much welcomed light at the end of a very narrow and dark tunnel. The girls from Effie’s are proud of their bodies and don’t look to anyone for approval, except maybe Miss Effie. They are also incredibly proud of their geekiness and will put even the most nerdy nerd boy to shame with some of their Sci Fi knowledge.

This past week Effie’s put on their Geeksgiving show which was called “Geek Girls Are Easy… To Talk To”. It was an hour and twenty minutes of veritable geek and boob bliss (not to mention some ass, from two talented male guest performers). The Effie’s girls worked night and day on their costumes, dance routines and timing to make sure that laughs were had at just the right moment. And, while most numbers included a reveal (a reveal being the strip tease finish to panties and pasties), some of them were straight up variety acts – which were incredibly well received. 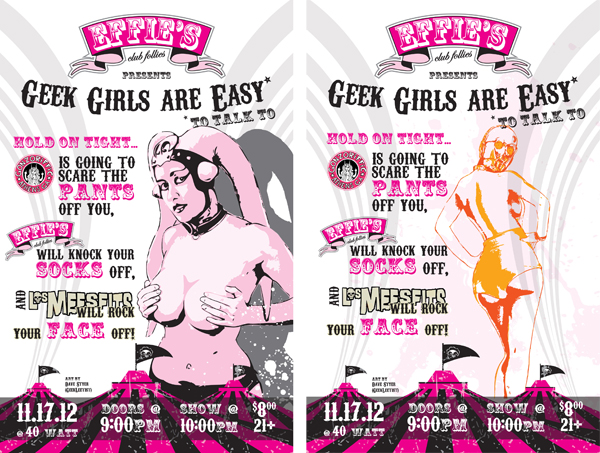 It’s hard to say what my favorite number of the evening was because they were all so good. And, really, anything that ends in boobs is a WIN for me. There was a Willy Wonka number that involved candy wrapped sex toys, a Bladerunner chair dance starring Rachel, Amy Pond seducing the Doctor, Mr. Rogers growing 12 inches (in his pants), a Too White and Nerdy strip tease, a nerdy chemist becoming a sexy vixen, and even a Middle Earth beauty contest – that inevitably ended in beards and pie (Dwarven women get angry when they aren’t invited and Hobbits stress eat – who knew? – these girls did, and so did their audience!).

Burlesque performers work hard to entertain; rehearsing weekly and finishing costumes just moments before a show. Geeky Burlesque performers may work even harder because they are passionate about their content, it’s a part of them and a part of their audience. They aren’t just riffing on pop culture they know their audience will get, they are riffing on pop culture that they are a part of. It is their culture. It is their passion. You can’t just pull a Zora snakedance number out of thin air if you don’t have a love affair with Bladerunner, you won’t do it justice, and the geeks – they’ll know. 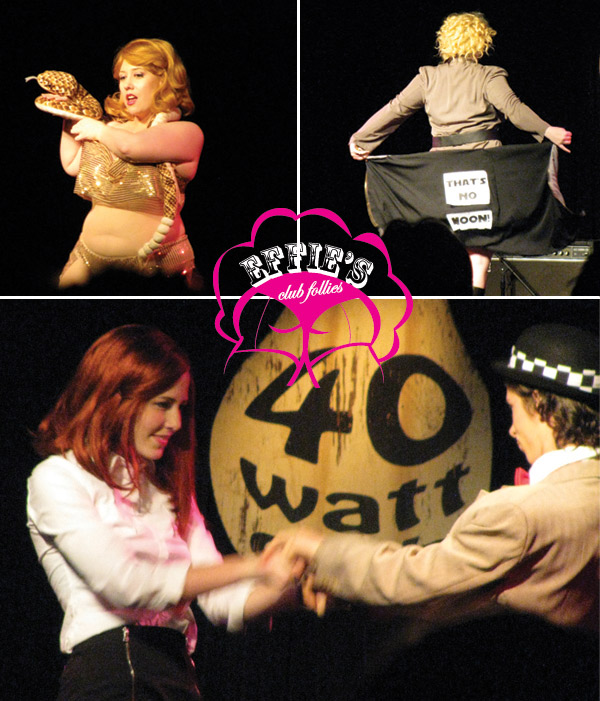 Scouring the internet I have found a few Geeklesque numbers and troupes. These geeks (girls and boys alike) take their passion and turn it into something sexy and fun, and without question – often times more geeky than what it was originally. Geeklesque is a form of entertainment I think we should be paying more attention to. The audiences are there because they want to see this artform, they want to see the bodies and the geeky re-interpretations of their favorite Star Trek episode or gaming character come to life. The performers are there because they are self assured and passionate about their fandom.

Burlesque is body and geek [girl] positive. Let’s embrace this, like an Alien facehugger embraces its new host. Also, let’s make this a number!