Home/Nerdery Publications/Bring me a Cornetto, I’m Watching Zombies: Shaun of the Dead
­

Listen, as the Zombie Honey, I can say – with all love for the sub-genre – that zombies are a bit ridiculous. They are slow, slack-jawed and easily killed. I can also say they are not romantic or particularly funny. What’s funny about the shambling, grumbling, rotting undead – other than their shambling? So, over 10 years ago when we were introduced to the “first Zom-Rom-Com” and the first movie in the Cornetto Series, Shaun of the Dead, I was skeptical – to say the least. 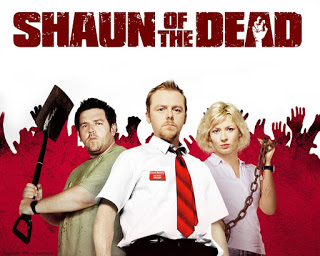 Happily, that skepticism was turned into full-on adoration.

What I didn’t know about the trifecta of Simon Pegg, Edgar Wright, and Nick Frost was way more than what I did know. But, what I did know was this: zombies + British humor + clear homages to classics + a twist on Rom-Com = Fuck, yeah!

Shaun of the Dead begins innocently enough with a couple of slack-jawed flatmates, Shaun and Ed, that would most-likely rather play video games all day than contribute to society. Because when doesn’t that sound like an ideal time? With their eye always on the prize of a pint at their favorite pub, The Winchester, they shamble through life in their own happy bubble of monotony. Even with a flatmate and a girlfriend urging them to grow up, do more, be more, they seem content with their small life conflicts as long as they can pop down to the local at the end of the day. 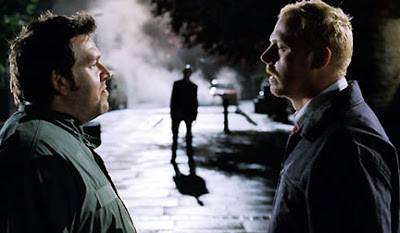 This hardly seems like a zombie movie in the making which makes the onset of a zombie apocalypse even more hilarious in its execution. After a typical day of shop-run, work, and failed plans, Shaun’s life actually gets a jolt when his girlfriend, Liz, breaks up with him. Without missing a beat, Ed suggests going to The Winchester for a pint to get over her. A pint or six later the duo shamble home, unwittingly encountering their first zombie and making him a part of their White Lines sing-along. This interaction almost sets the tone for the rest of the movie, and just when you’re ready to embrace the larger COM of this Zom-Rom-Com, it takes a dramatic turn.

The humor in Shaun of the Dead isn’t always laugh-out-loud, but instead a chuckle-and-nod recognition of our own nature – unaware of our surroundings beyond how they affect us directly. As the seriousness of the situation settles in, the drama builds, slowly replacing the overarching satirical comedy with an actual concern for surviving hordes of zombies. The deliberateness of this transition allows the audience to laugh with the characters and also be concerned for them. Plus, who doesn’t want to see how someone might survive a zombie onslaught in a pub? I’ve got my own pint glass ready.

Shaun of the Dead is rife with nods to classic films from King of the Zombies to Romero’s Night of the Living Dead to The Godfather. It’s also filled to the brim with all of the blood, guts, and gore you can handle. Including a special effects nod to Dawn of the Dead (1978) as a body is pulled through a window, and the intestines ripped out and eaten by a horde of the undead. The subtlety of Wright’s pop-culture inclusion makes rewatching more than just fun, it turns it into a seek-and-find game. 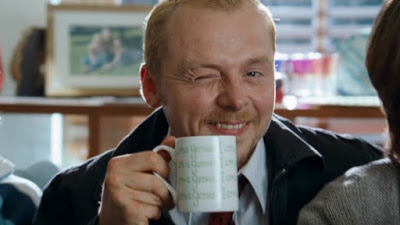 That’s the literal wink the movie gives you in it’s entirety – in case you missed it.

By the end of the film you feel challenged to do more with your life, in the event of a zombie apocalypse, of course. As you watch Shaun win back the girl and say goodbye to his to best friend – let’s be clear here, the Rom part of this movie is really about Shaun and Ed – you are pretty committed making sure you tell the ones you love that you love them, and to having a better survival plan than a pub.

Although, having a couple of kegs on hand isn’t really a bad idea.

Shaun of the Dead is witty without being pretentious, funny without being sarcastic, endearing without being sappy, and gorey without being gross. It fully embraces the love of a genre, without parody, and pays tribute to the movies that came before it with actual reverence. It’s a refreshing break from your typical zombie romp and a far cry from anything actually labeled a romantic-comedy. Plus, Bill Nighy.

Zombie Honey Rating: 4.5 White Line Lyrics stuck in my head out of 5.