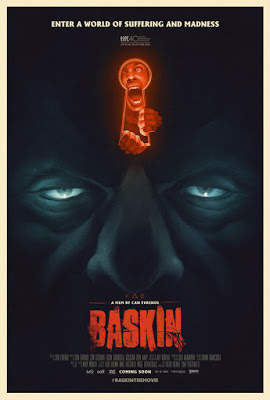 I readily admit that there are some movies that I just do not understand. Mostly they are time-travel movies. That shit gets me turned around every time; seriously, I’ve seen 12 Monkeys at least 12 times and I still have to have someone keep a running timeline for me. And don’t even get me started on Primer. But occasionally, another type of movie comes along that makes me wonder: what in the hell did I just see. Baskin is the newest film to be added to that list. And while I’m pretty sure I liked it, I’m not entirely sure I understood it. Or maybe I understood it, but I’m not entirely sure I liked it?

IMDB has the best synopsis for Baskin that I’ve read so far:

“A squad of unsuspecting cops goes through a trapdoor to Hell when they stumble upon a Black Mass in an abandoned building.”

Which is equal parts yes, and no.

Baskin begins outside of a dream. A young boy awakens to the sounds of his parents, presumably, bumping uglies. He listens at the door momentarily before padding off to turn off the TV. The white noise from the static follows the boy back down the hallway where a disembodied hand reaches for him through his bedroom door. Screaming at his parents’ door – we are thrown into what we can assume is the present day. Now sitting in a restaurant where a group of cops are sharing their cop stories about their cop lives and generally being coppish. 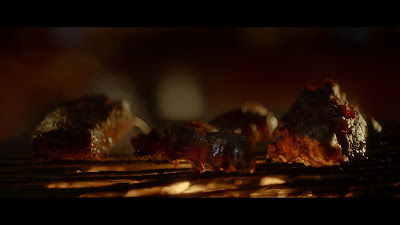 In the background we see a hooded figure traipsing about with a bucket of blood and meat. This seems like a non-factor to the story as we witness the cops abuse their power over the busboy, quite violently, only to be interrupted by one of their brood losing his mind in the toilet. As the group pulls themselves together, they are called for backup to a place that they speculate about- is it good, is it bad, is it haunted, is it even real? After a brief moment, enjoying a road trip sing-a-long, Baskin opens a new door. 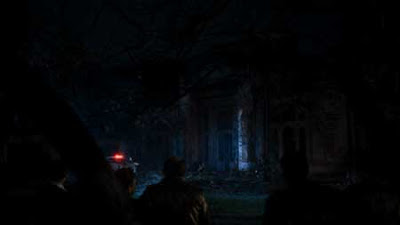 I would turn in my badge if I had to go in there.

The driver sees a man run across the road, but there is no man. In an effort to hurry to their call of duty, they run over something/one and crash into a lake. Apparently, never the ones to turn away from a raid, they make way on foot to their destination: an abandoned mansion in the middle of some creepy ass woods avoided by even the hobo family nearby. And here, as the cops arrive, Baskin opens another door. 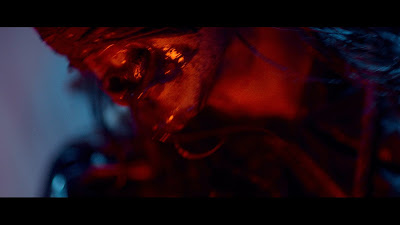 Why aren’t hell-minions ever covered in… not blood?

Inside the mansion lies a labyrinth of hallways, stairways, and rooms filled to the brim with who-knows-what. We only get to see what the director wants us to see, which is very little. Our perspective is only as big as the circle of light from the flashlights bouncing across the blood soaked floors and, I’m guessing, shit stained walls. And, with every labyrinth of hell, there are the people/creatures that inhabit it. You know they’re coming, and yet, you’re still not prepared for what you are actually witnessing. Here, it’s as though the mansion itself becomes aware of more intruders, and in typical horror tropiness the gang makes their way further into the depths of this hell. 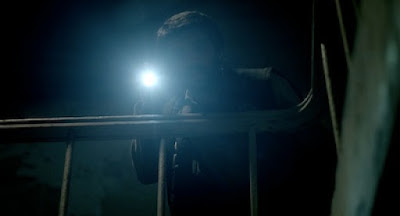 Do not go down the hell hole.

…And it wasn’t until I just wrote that that I realized, the staircase circles downwards, further and further until the center of hell itself. It is actually the circles of hell. Jaysus.

Here, Baskin, opens yet another door. In the center of hell itself with it’s minions and masters, mashed together and separate. It’s unsettling in its calm. But it is calm. And I’ll stop here with the detailed plot outline, because this moment in the hell dimension is one you must see to appreciate, or to despise. The actual fatherliness of The Father, Baba, is unquieting, as he does the evil things that he does. 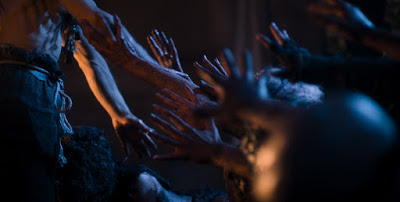 This is not the daddy you were looking for.

And splintered throughout these last moments in hell, those previously opened doors close- forcing your perspective back to the beginning with the child, or back to the restaurant, or back to a different dream part of a dream that you thought you had once, but isn’t quite the same. Conversations and actions begin to set in motion your understanding of it all, but through a weird lens that is mostly out of focus. The sentiments are typical, “you carry your own hell with you”, and yet, the feelings are very real.

At the end of Baskin you’re left wondering if the symbolism was too obvious, or too obscure. Leaving the point of the movie somewhere in the middle is just confusing – but that’s whatBaskin has to offer, I think. Confusion laced with a viscous understanding that you cannot shake or accept. 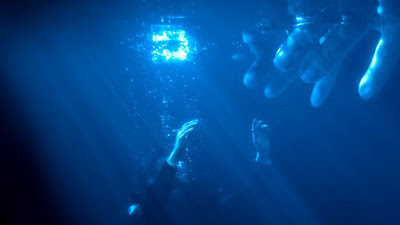 Is this the real life… is this just fantasy…

Baskin is like a Fulci inspired dream, colored by Argento, and tied together by Barker without safewords. It’s a moving picture of an existential hell, without need for characters or narrative. Just one hellscape bleeding into another. Like waking from a dream within a dream within a dream; except it’s difficult to say whether Baskin pulls it off with the grace of a movie likeInception, or if it’s just covered in enough blood and guts to make you hope you wake up somewhere else. Either way, it’ll make you really want to wake up.

Zombie Honey Rating: I’m pretty sure I’m in purgatory (4 out of 5)

AUTHOR’S NOTE: There is so much to process about this movie and the loops it creates on itself. It’s hard to say whether the cops are dead or alive from beginning to end. This is one I’ll be revisiting. Not often, because I’m unsure what that would do to my already sketchy psyche. If you’ve seen Baskin, please, talk to me about it. And if you’ve mapped out the loops, send the charts to me, because reality loops in hell are far more confusing than time-travel.

FYI: Baskin is a Turkish horror film by first time director Can Evrenol. I think he’s one to keep an eye on. Also, baskin means: raid, sudden attack, or descent – so that’s appropriate.