Home/Nerdery Publications/Attack on Titan: The End of the World (Part 2)
­ 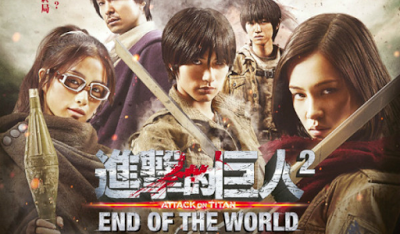 AoT Part 2 picks up pretty much where the first part leaves off – at least as far as plot is concerned. The tone has completely shifted. Our characters have moved beyond a purpose driven by fear and survival, and are now inquisitive about who and what they are fearful of – and what their new purpose should be. After a ridiculously long recap, AoT dives into the meat of the second half of the story. Fueled by a flashback to explain that titans were people and that people can become titans, the heroes must quickly decide what to do with their very own human-titan weapon.

The shift in tone could have been off putting if it wasn’t so reasonable, and if the opening scene didn’t strike me so powerfully. The melodramatic, teenage angst that we are fed in the first film transfers over, but it’s aged and there’s a reason for the melodrama – as the larger story comes completely into focus. 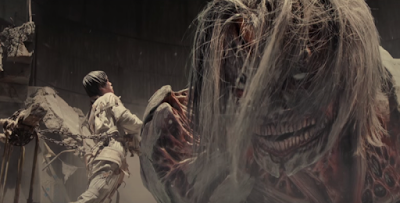 Gone are the hordes of naked, humanoid titans and the focus on fighting off the titans. The new focus is on the people and the hope that they bear. Hope that they can harness the power of their new-found human/titan, close the gap in the wall, and create a new world for everyone living on the inside. This is a little clumsy at first, but it picks up in a beautifully weird scene between the main character and the stereotypical, evil doer (in this case, not so much evil as rebellious) – complete with monologue, maniacal laughter, a little homoeroticism (this one is for you, you giggling 15yr old girls) and Skeeter Davis’ End of the World playing on a juke box… (Seriously, this moment is fantastic.)

If this first tonal shift is too much for you, don’t worry, it shifts back in relatively short order.AoT ultimately becomes a Kaiju movie. I’m not even entirely sure when it happens, but the feeling that you are watching a Godzilla movie on the big screen is overwhelming. The people drama has dropped away and the giants are fighting. There may have even been some people pointing and running away. I can’t recall, it was a very quick change in pace.

And, that is one of two issues I have with AoT Part 2. Between the first movie and this one the change in tone is acceptable. I don’t believe that these movies were meant to be watched back to back as one film – they just won’t work that way. And that’s okay. What doesn’t work for this particular part is that there are three shifts – one for each act – and they are all so abrupt that it makes the entire film feel disconnected.

Act 1: People drama
Act 2: Kaiju action
Act 3: …and they all lived happily ever after

In theory this set up could work, except the people drama is cut short – dissected by a titan battle – only to return to people drama while battling a titan. The time filler is apparent and does not maintain its entertainment value.

The second issue I take with AoT Part 2 is the ending. The “hope springs eternal” mood that immediately rises from the dust as the sun sets on it is a little too out of touch with the rest of either part of this story. It’s not a hopeful tale, and to end it on a note that shoves it down your throat completely undermines what mood had been created in the opening scene. It’s a damn shame, that.

On the whole, the movie was still entertaining. I fail to see how someone can not be entertained by giant naked giants fighting each other. Or by the story of a girl and her gun, or a girl and her potato. Sometimes it’s the smaller side-stories that help to keep things together and at the very least AoT never failed to come back to those smaller details.

I’ll reiterate here that this live-action adaptation of the manga-to-anime is not supposed to be a continuation of those mediums. It is a stand alone adaptation. And, while I am usually one to bitch and moan about doing the original source material justice, I just don’t feel that way here. These movies do not work as one solid movie, but as something all its own, both are just fine.