Attack on Titan: Part I

Attack on Titan: Part I

On heels of an insanely successful manga came an equally successful anime. Attack on Titan. I don’t want to be that hipster bitch that calls attention to liking something before it was cool, but I’m gonna. I remember watching the pilot of AoT on Crunchyroll right after it premiered. I was left simultaneously confused, horrified, and hungry (pun totally intended) for more. That being said, if you’re a fan of AoT – either the manga, the anime, or both – you may or may not like this review. 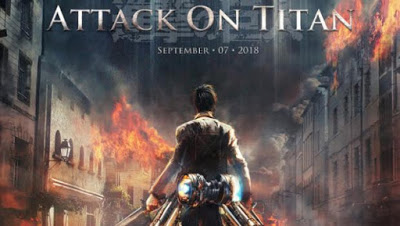 Typically, I am one of those people that has a very difficult time separating the medium of the source material from its new medium. Case in point: I’m super skeptical about the Preacher live-action adaptation. However, in the case of AoT, I was more than open to the idea of a live-action film series, and I was not disappointed. Unlike many other reviewers – yes, I made the mistake of reading other reviews – I was pleasantly surprised by the epic that was part one of AoT. Maybe it’s because I understood before hand that director Shinji Higuchi was encouraged to use creative license within his adaptation. Or maybe it’s because MORE ofAoT couldn’t possibly be a bad thing.

If you’re not familiar with Attack on Titan, the basic premise is this: Humans have been ravaged by Titans – giant, sans-sex humanoids whose only desire is to eat humans for the sake of eating them. After the majority of the human race is wiped out during the Titans’ gluttony, the humans built a wall. A wall large enough to enclose the surviving members of the human race and keep the Titans out. Years later, disenfranchised with life within the walls, a young man and his friends enlist in the military to defeat the Titans who have once again decided to binge on humans. 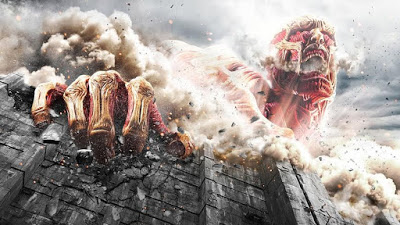 Watching AoT is kind of like watching Full Metal Alchemist. It’s a measure of love and devotion to characters you care about. It’s also a huge test of your patience – for nothing positive ever happens.

Going into the live action AoT, my only hope was to get a true sense of the size and horror of the Titans themselves. I was not displeased. The set up is quick and the introduction to the characters comes through their interaction with each other – which is promptly interrupted by a visit to the wall and a HUGE, firey, naked, hungry Titan breaking through said wall. Despite being in a theater that was not anywhere near IMAX size, AoT succeeds in making the audience feel incredibly tiny. It also succeeds in creating a claustrophobic atmosphere that is quite unsettling. The fact that you are within walls – trapped like mice being hunted by hungry, skinless snakes – is never truly lost on you, or the characters. 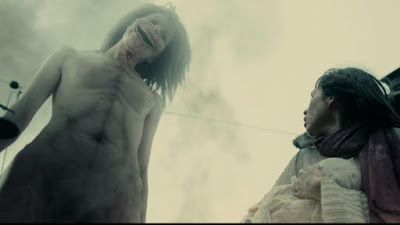 If the story isn’t enough to intrigue you, the effects should be. There is some shoddy CGI work here and there, but for the most part it’s pretty solid. And what’s even better is that most of the effects are actually practical. Rather than create Titans that would be laughable CGI monsters, the director decided to make use of actors in skin-suits, puppets, and robotics controlled by said actors. This creates something more laughable – Titans that seem to resemble the neighbor next door. But, it’s only giggle-inducing for a moment, before that giggle turns to a gasp as the running, jumping behemoth grabs a puny human and bites him in half, or swallows him whole.

Despite some dropped backstory and occasional lazy storytelling, AoT was pretty much what I expected; it was completely able to stand on its own if you hadn’t seen or read anything before hand. And, what doesn’t work in the live-action design is more than made up for by what does work. When one minute you can’t stand the bizarre character interaction, the next minute it’s made up for with seemingly unintentional humor that actually brings gravity to the scene. When in one moment you find the wide-eyed, open mouthed look of the Titan too ridiculous to be concerned with, the next moment you’re horrified at an inside look of their mouth and throat. 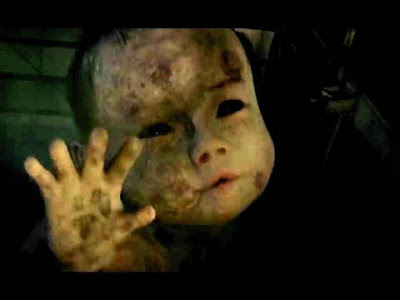 And if none of this actually works for you, consider this: Baby. Titan. Yeah. That’s a thing that happened.

The first part of AoT ends pretty much where I left off with the anime, and I was pretty pleased with what I saw. I probably won’t get around to finishing the anime – or catching up – before I see part two, but I am still anxiously awaiting that day. I already have my tickets, and my cuddle buddy.

You can read Attack on Titan: End of the World (Part II) Review Here.