Dragon*Con has come and gone and we didn’t have to shock Bella Blitz once.

If you’re not aware, Dragon*Con is the largest multi-media, popular culture convention focusing on science fiction and fantasy, gaming, comics, literature, art, music, and film in the universe! (or at least the Southeast). People from all over WORLD converge on Atlanta to experience cosplayers, celebrity panels, artists, swag booths and more. We were a little late in the game this year, so instead of a booth for our blog and wares, we sent Bella out with branded zipper pulls and #SWAG stickers. Because, where better to promote a nerd-based site than at a nerd-based function?

The weekend was successful in that she was able to talk to many people about Nerdery and give out goodies in hopes of driving traffic to this here webbysite. We’re still a fledgling blog – despite our grandiose amount of content – and promotion is key. Dragon*Con was a pretty perfect location for some face-to-face marketing. If you were roaming one of the five host hotels and were approached by a raging woman with pink hair and angry boobs and forced to take stickers and postcards, we apologize – a little bit. 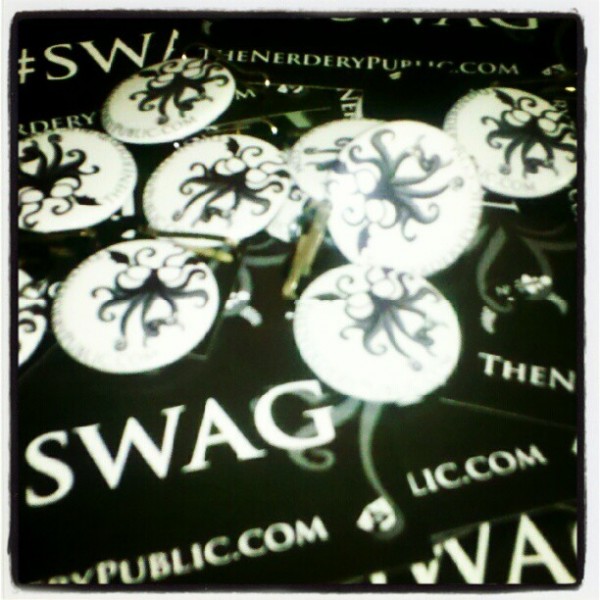 Bella set up “shop” in the comic and pop artists room with our close friends Urbnpop and Poopbird. If you managed to swing by their table and grab a sticker or a zipper pull, send us a message and we’ll tweet about you. Take a photo, and we’ll Tumbl it! If you bought something from one of these amazing artists, do both and we’ll send you more swag!

Our goal for Dragon*Con 2013 is to have our own booth. You can come and meet and greet with the republic – they are more interactive in person, which is saying a lot if you follow them on Twitter. You’ll be able to pick up a printed publication of Post Apocalyptic Living and buy some nerdmerchery to take home to your own geek palace (including a GEEK flag).

Next year, we won’t be littering the halls with Nerdery Public stickers or Bella’s scales; instead, you can come to us, get a hug, talk nerdy, and hand us things to throw away.

It only seems fair.