Hi, my name is Sara, and it’s been (at least) one year since I last played Battlestar Galactica. 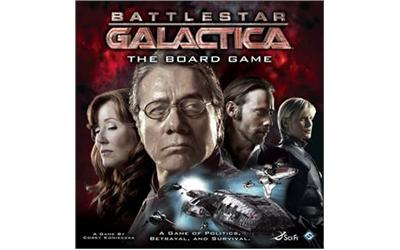 This is not entirely by my choice alone, mind you. You cannot play Battlestar Galactica by yourself. And, you cannot play Battlestar Galactica with people who are not your ‘true’ friends. This is not to say that you can’t ever play any games with people who you aren’t friendly with, but the BSG game does something to you, that only with the love of a friendship will you survive. It’s AS stressful as the first episode that reimagined BSG, 33. Haven’t seen it? What are you waiting for! Take three days off, launch Netflix, and get to work. But I digress, this isn’t about the TV show – it’s about the game.

My little buddy, Poopbird, is a HUGE board game fan. When we first met, the Doktor and I would gather around his table once a week for a thrilling game of Tannhauser. As we all became closer friends – through killing zombie nazis (like you do) – we decided to add more games to our repertoire. We played Munchkin for a while, Catan for a minute, and then moved on to World of Warcraft. It wasn’t too long after that we were all introduced to Battlestar Galactica. After watching season after season without seeing the light of day, we were ready to venture out into the world of Dragon*Con. Where, lo and behold, the BSG game was available. 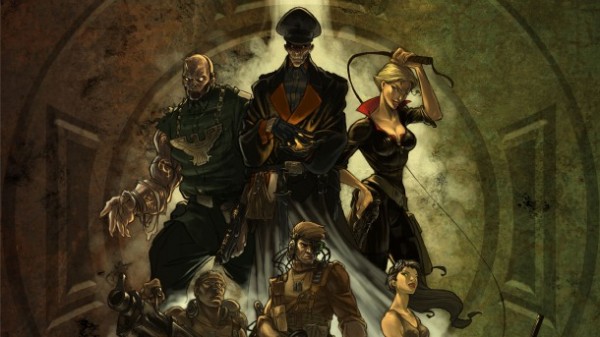 If you haven’t played a boardgame of this magnitude before, let me set the scene for you. You have a giant board with the Battlestar Galactica in the center and open space all around. There are spaces on the board for cylons to attack you, and the president’s ship for government control. There are between 6-8 color coded action cards that allow you to perform an action or stop an action; some during your turn, others at any time. You have your cylon card – are you or aren’t you a cylon – only you know! There are two decks of cards, special cards for the president and mission cards for each turn. And then, your character card and game piece. Your character card also has special rules for you to follow. Once all of this is set up, you start the game play. Epic, and yes, complicated. 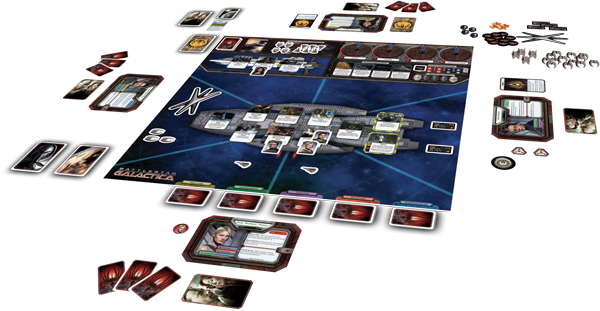 We learned quickly that this game does not take it’s time. The action starts IMMEDIATELY. And, by action, I mean the demise of the humans. With the first roll the mission card chosen put us in severe danger. We were being attacked by a Cylon Base Star and four raiders that were all pointing at two civilian ships. Our rolls weren’t good enough and our action cards didn’t put a dent in the onslaught. We were sitting ducks as we rolled again. The game moves forward. Another mission card is drawn. In pops ANOTHER Cylon Base Star, two more raiders and two more civilian ships. We’re ten minutes into actually playing the game and we’re all freaking out. We hold our breath as Mizz Katonic attempts to fire nukes at one of the offending Base Stars.

She misses. She rolls again. She hits, with just enough damage to keep the ship from releasing any further raiders. All of us let our breath out at the same time. The stress level was high. It was like watching the first episode all over again. We were getting paranoid and tired and sweaty – like we couldn’t sleep. What was the next mission card going to do to us? Could we survive it? 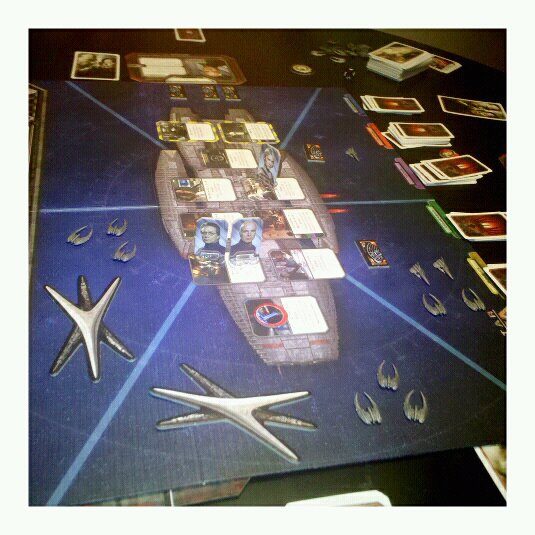 Luckily enough, the next card pulled was a decision card for the president – who happened to be the Doktor. He sacrificed our morale for our population. That was good, we were many – but we were miserable about it. The game continued in similar fashion – choosing between bad and worse – always with the impending death by raider looming in space. We were able to whittle away at the raider count and keep our civilian ships safe… until about halfway through. Speculations were flying about who the Cylon was, and there was a twist in the game about to be introduced. YOU GET A SECOND ALLIANCE CARD. You may have thought you weren’t a Cylon the ENTIRE time, but now, you could be! Eyes darted back and forth, fingers were pointed accusingly and Poopbird – the gods love him – accused Mizz Katonic of being a Cylon so ferociously that I felt guilty for NOT being one.

We calmed ourselves long enough to prepare for the next mission card – of DESTRUCTION. Literally. Mizz Katonic flipped the card and read it to herself, then read it aloud. Two Cylon Base Stars, six raiders, two heavy raiders, four civilian ship. We hadn’t even cleared the board from the last attack and we weren’t able to jump away yet. So really it was nine raiders, two heavy raiders and six civilian ships – and our sanity hanging in the balance. The Doktor was able to clear away three of the raiders. Poopbird was able to destroy one heavy raider. Mizz Katonic cleared away two more raiders. I was up next. All of our resources were low, and one more hit could end the game. 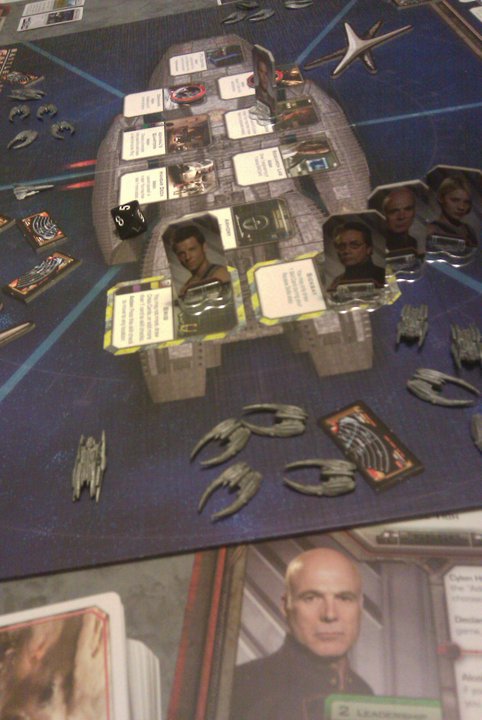 I rolled. I missed.

The attack on the civilian ship was detrimental. We lost the last of our food. We starved to death. We never found Kobol. We managed to avoid being overrun by Cylons, but we died anyway. As we all let out our breath again, we began eyeing each other to find out who the rotten toaster was. It wasn’t me. It wasn’t Poopbird. The Doktor smirked and flipped his alliance card over. Frakking toaster! He was barely ruining us, just watching us flail in space as his robot horde helped us kill ourselves off. We hooted and hollered and accused him of being everything wrong in the world. He just laughed. Because, that’s what you have to do. And, as we settled down, we turned to Mizz Katonic. There could always be two Cylons. She had already packed up her game pieces. We didn’t get to see her alliance card. Was she?

The Doktor and I remain convinced, to this day, that she was a human. We’re still friends.

Poopbird, on the other hand, was positive she was also a toaster. No human could roll that well every time. Surely, she had to be a Cylon. He vowed to airlock her as soon as he was able. And, continued to give her the stink eye as we parted ways. They are still together, but oddly, they never fly anywhere.

BSG made an impact with the first episode, and BSG the board game made an impact with the first game. We purchased expansions. We continued to play. We continued to accuse. We brought more people into our little gaming world and accused them of being Cylons as well. These people are our friends, thank the gods, because when someone thinks you’re a Cylon – it gets ugly, fast!

I’m not sure we ever made it to Kobol more than once. I am sure that Poopbird has promised to airlock us all though.